Rain begins to fall on drought and fire-ravaged country near Tamworth, Australia ahead of predicted further wet weather across NSW and Victoria this week, seen here on Jan. 15, 2020.
Brook Mitchell—Getty Images
By Mélissa Godin

Intense thunderstorms have brought hail and strong rains to some regions of Australia, where bushfires have been burning at an unprecedented scale.

Farmers and firefighters alike celebrated the rain, which has helped disperse smoke in Melbourne and could dampen bushfires. The Australian Bureau of Meteorology, however, has been weary to celebrate, calling the thunderstorms a “double edge sword.” The storms have ushered in a host of new problems like flooding while exacerbating old ones; lightning strikes have sparked at least two new fires in the Great Otway National Park.

“Unfortunately with lightning strikes, it’s not always the next day they pop up,” Rural Fire Service Commissioner Shane Fitzsimmons told the Australian Broadcasting Corp. “They can smolder around in trees and in root systems for a couple of days and pop up under drier, hotter conditions.”

The bushfires in Australia have burned an estimated 15.6 million acres since July 1, which the government has struggled to contain despite international support. At least 24 people have died, millions of animals have perished and people across the country have been forced to flee their homes, thousands of which have been set ablaze.

While the New South Wales(NSW) Rural Fire Service spoke hopefully about the rain, tweeting “relief is here for a number of firefighters working across NSW,” they noted that the storms alone could not put out current fires. The rains have yet to extinguish fires or hit the regions that need it most.

The thunderstorms also bring further problems. On Thursday, three inches of rainfall caused flooding and damage to parts of Melbourne with the city receiving a month’s worth of rain in the span of a few hours. In NSW, 10,000 households and businesses lost power due to thunderstorms.

Authorities have also warned that in drought-ridden regions where bushfires have burnt water-absorbing vegetation, massive amounts of rain could lead to dangerous flash floods and landslides.

Bushfires can create their own weather, according to The Bureau of Meteorology, including thunderstorms. When hot air generated from smoke meets cool air, it creates pyrocumulus clouds (also known as “fire clouds”) that generates strong winds and thunderstorms. Satellite imaging captured the formation of these clouds over Victoria on December 30.

Climate scientists say that climate change intensified the current bushfires due to prolonged droughts and record high temperatures. As Australia continues to grapple with its climate emergencies, questions remain about the safety of some areas.

“They’ve got to drastically change their relationship with the surrounding environment; they’ve got to drastically change the surrounding environment in order to be able to survive and reduce their vulnerability,” said Ross Bradstock, the director of the Centre for Environmental Risk Management of Bushfires at the University of Wollongong in an interview with the Atlantic. “Another option is the retreat from flammable places.” 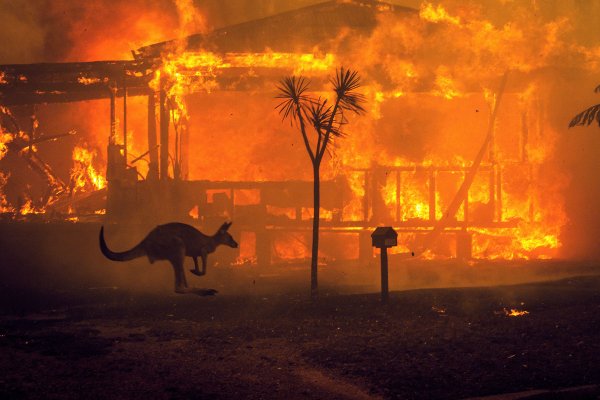 Australia’s Bushfires Show the Wicked, Self-Destructive Idiocy of Climate Denialism Must Stop
Next Up: Editor's Pick