'I've Seen Everything.' Author Isabel Allende on Why She Doesn't Fear Death and the Inspiration for Her New Novel

"How are you going to stop the invasion of the desperate?  " —Isabel Allende
Oscar Gonzalez—NurPhoto/Getty Images
By Belinda Luscombe

Your new novel, A Long Petal of the Sea, centers on a historical event: in 1939, the poet and diplomat Pablo Neruda chartered a boat to take 2,200 Spanish Republicans fleeing Franco’s dictatorship to Chile. How did you hear about this?

When the ship first reached territorial waters in Chile, they sent, as I write in the book, two very young bureaucrats to receive the ship and give them visas to enter the country. One of those guys was my stepfather. Many years later, I stumbled upon the story again, when I was living in exile in Venezuela. With family like mine, you don’t need to invent anything.

Why did you decide to write this book now?

The theme of migrants and refugees and displaced people is in the air. And it’s something that is very close to my heart. First, because I have been a foreigner all my life. I don’t have roots in a place. And also I have a foundation that works with migrants and refugees on the border. I know so many cases, it’s so close to me right now.

Do you have any strong feelings about President Trump’s “wall” rhetoric?

What do you say to Americans who believe a country has a right to defend its own borders?

I say that we have to defend the borders from aggression. But not from the desperate. How are you going to stop the invasion of the desperate? You have to incorporate them and provide space for everybody.

In the book, you write of a man who has seen the angels and fears nothing. Is that also true of you?

I don’t fear death. And I don’t fear most of the things that other people fear. I’ve lived long enough. I’m 77. I’ve seen everything. And I’ve seen how things seem really bad and we seem to be in a very dark place, and then we get out.

Elsewhere in the book, a daughter appears out of nowhere. Does this reflect your desire to see your daughter [who died at age 29] again?

I don’t know; I wasn’t thinking of Paula. I do often think how would she look today. Would she tint her hair? I don’t think so. Would she still be married to the same man? Probably not. And I see sometimes a woman who is 56 years old today, and I say: Would she look like this?

You have said that people write to recover what has been lost. What were you recovering in this book?

Memory. It’s the memory of things that have happened in the past and are still happening today exactly the same way. The difference between those 2,200 refugees that came to Chile [and those today] is that they were well-received. They made space for them. And they contributed immensely to our culture.

You’ve got a Presidential Medal of Freedom. You have 75 million copies of your books in print. You are the biggest-selling Spanish-language author in the world. Do you feel like any of your achievements eclipse others?

I just work. I love the work in progress. I love to tell a story. I still write on the same computer in the same place, the same stories. I always start on January the 8th. It’s discipline. If I didn’t have a time to start, I would be procrastinating forever. So nothing changes really for me or for the little circle of my family and friends around me. The rest happens outside, in another place, in another dimension of reality that has nothing to do with me. 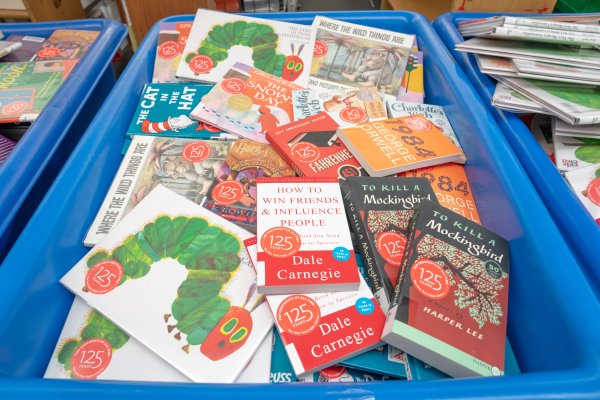 Here Are the 10 Most Borrowed Books of All Time at the New York Public Library
Next Up: Editor's Pick