Jeanine Cummins’ 'American Dirt' Is a Harrowing Tale of Immigration, Family and Memory

Nine publishers bid for the novel, which sold to Flatiron for seven figures
By Nicholas Mancusi

Jeanine Cummins’ highly anticipated fourth book, American Dirt, opens with the kind of massacre that has become terribly familiar to those forced to live in the cross fire of Mexican drug cartels. At her niece’s quinceañera in Acapulco, a middle-class Mexican bookstore owner named Lydia shields her son in a shower stall while sicario gunmen murder the rest of their family, 16 people in total, in a merciless hail of gunfire. Lydia’s husband, a journalist, had published an exposé on an up-and-coming cartel kingpin–a fatal choice in one of the most dangerous regions in the world for journalists.

For Lydia and Luca, nowhere in Mexico is safe. Lydia knows if they have any chance of outrunning the cartel, they will have to head north. Without time to bury her family, she finds herself and her son counted as two of the thousands of desperate migrants attempting to reach and then cross the U.S.-Mexico border. “They must be stubborn about one thing only: survival,” Cummins writes.

This is an epic tale more Iliad than Odyssey, as mother and child race away from home and face harrowing challenges in the scorching heat of the desert, often walking, sometimes strapped to the top of a freight train known as la bestia for the many unlucky riders killed or maimed beneath its wheels, under constant threat of brutality from both sicarios and fellow migrants.

Cummins’ efficient prose delivers thrills, horror and tender moments, but it’s the action scenes that stand out: “Luca runs with his wet pants and his mami’s hand and all the horrific memories of Abuela’s green shower stall. And then Mami cries out and it all goes into slow motion: Mami’s cry, a shrill, corporeal thing, it bubbles out of her like a fully formed bird and it flies, but Mami doesn’t.”

Some of the faintest praise that could be bestowed on a novel is to call it “topical,” but while this book reflects the current real-world crisis at many of the world’s borders, the story is masterfully composed of timeless elements: the nightmare logic of grief, the value of human kindness, the power of love to drive us to do the unimaginable. And although Cummins, who married an undocumented immigrant, has written an eminently readable adventure, she doesn’t mine the pain of migrants for entertainment. Rather, she proves that fiction can be a vehicle for expanding our empathy. 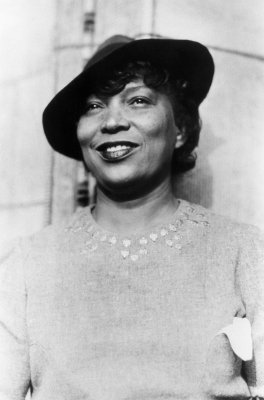 Zora Neale Hurston's Short Stories Finally Get Their Due in a New Posthumous Collection
Next Up: Editor's Pick