YouTube Has Been 'Actively Promoting' Videos Spreading Climate Denialism, According to New Report

An Extinction Rebellion environmental activist youth group protest on the roof of the entrance to Youtube demanding they stop climate deniers profiting on their platform on October 16, 2019 in London, England.
Ollie Millington—Getty Images
By Ciara Nugent

YouTube has been “actively promoting” videos containing misinformation about climate change, a report released Thursday by campaign group Avaaz claims, despite recent policy changes by the platform intended to drive users away from harmful content and conspiracy theories.

Avaaz examined 5,537 videos retrieved by the search terms “climate change,” global warming” and “climate manipulation,” and then the videos most likely to be suggested next by YouTube’s “up next” sidebar. For each of those search terms respectively, 8%, 16% and 21% of the top 100 related videos included by YouTube in the “up-next” feature contained information that goes against the scientific consensus on climate change – such as denying climate change is taking place, or claiming that human activity is not a cause of climate change. Avaaz claims this promotion process means YouTube is helping to spread climate denialism.

“We’ve found that it’s very likely that at least one in five users who search for a term like global warming or climate change could be sent down this type of misinformation rabbit hole,” says Fadi Quran, a campaigns director at Avaaz, and one of the report’s authors. “Scientists are working so hard to educate people about the existential threat we face and YouTube is allowing bad actors among us the last word on this issue for many people.”

Smaller scale studies have previously suggested that a majority of climate-related videos on YouTube oppose the scientific consensus on climate change.

The “up next” feature dictates what users watch for 70% of the time they spend on YouTube. The exact make-up of the YouTube algorithm that drives recommendations, designed to keep users on the platform for as long as possible, is a closely guarded secret. Experts say the algorithm appears to have learned that radical or outrageous content is more likely to engage viewers.

When it comes to climate change, Avaaz says, that leads to the promotion of controversial videos with titles such as “Global warming is a hoax” and “ACTUAL SCIENTIST: Climate Change is a Scam!” The algorithm is also personalized to each user, meaning that after you watch one video containing climate misinformation, it is more likely to recommend another for you.

In January 2019, responding to criticism over the platform’s tendency to drive people towards more radical political and social viewpoints, YouTube announced that in the U.S. it would begin reducing recommendations of “borderline” content that pushed the limits of Community Guidelines on areas like hate speech, as well as “content that could misinform users in harmful ways—such as videos promoting a phony miracle cure for a serious illness, claiming the earth is flat, or making blatantly false claims about historic events like 9/11”. In December, YouTube said that policy had been successful, driving down the average time spent by U.S. users watching recommended “borderline” content or harmful misinformation by 70%.

But Quran says it remains unclear if that policy is effectively applied to climate denialist content. “They say all scientifically inaccurate information that causes harm is included under that policy—which should indicate that climate denial is part of it,” he says. “However [YouTube’s parent company] is not transparent and our research so far indicates that climate denial videos are still being actively recommended. Either their downgrading tools are not working as they should, or they have decided to exclude climate denial from the system.”

A YouTube spokesperson tells TIME, “We can’t speak to Avaaz’s methodology or results, and our recommendations systems are not designed to filter or demote videos or channels based on specific perspectives.” They add that YouTube’s systems “prioritize authoritative voices for millions of news and information queries, and surface information panels on topics prone to misinformation — including climate change — to provide users with context alongside their content” and that the systems appear to have done so “in the majority of cases in this report”.

Ads for major brands appeared alongside the videos containing climate misinformation seen by Avaaz. The campaign group claims that by promoting climate denial videos to drive more viewing time, and by placing ads alongside these videos, YouTube is profiting from the spread of misinformation.

The YouTube spokesperson says they have “strict ad policies that govern where ads are allowed to appear and we give advertisers tools to opt out of content that doesn’t align with their brand.”

Pressure from advertisers, some of whom Avaaz informed about their findings, could potentially push YouTube to take more action on climate denial content. An advertising boycott in 2017, when brands sought to prevent their ads appearing alongside extremist content, cost Google millions of dollars in revenue, and helped drive YouTube to strengthen efforts to limit how often its platform surfaced extremist content. (As well as reducing the promotion of borderline content, in June, the platform began removing thousands of videos displaying white supremacism and other hateful ideologies.)

Stephan Lewandowsky, chair of the cognitive psychology department at the University of Bristol, who studies climate misinformation, says the question isn’t whether YouTube could deal with climate denialism on its platform, but whether there the company’s leadership have the political will to do so when there is not yet “political consensus” in all countries around climate change. “With the radical Islamist and the white supremacist material [that YouTube has been successful in policing], they recognized that was something they definitely couldn’t get away with [hosting],” he says. “With climate denial, even though it is a scientifically totally absurd position, there are plenty of politicians in the U.S. and Australia, for example, who are immersed in this stuff.”

Misinformation around climate change and its impacts are still commonplace in some prominent mainstream media. On Jan. 14, James Murdoch, son of Australian media mogul Rupert Murdoch, criticized the “ongoing denial” of the climate crisis displayed by his father’s news outlets, particularly in coverage of Australia’s current bushfire crisis.

For Lewandowsky, the promotion of climate denialism, both in the media and to YouTube users searching for content about climate change, creates a major stumbling block to political momentum on cutting greenhouse gas emissions. “For many people who are not trained scientists,” he says, “the moment they’re exposed to what appears to be a scientific debate—but isn’t actually, because the science was settled a long time ago— they feel they can say “Oh, well, the scientists don’t agree on this—we don’t have to do anything.”

Sign up for One.Five, our climate newsletter to connect the dots between major news stories and the race to keep global temperatures from rising. 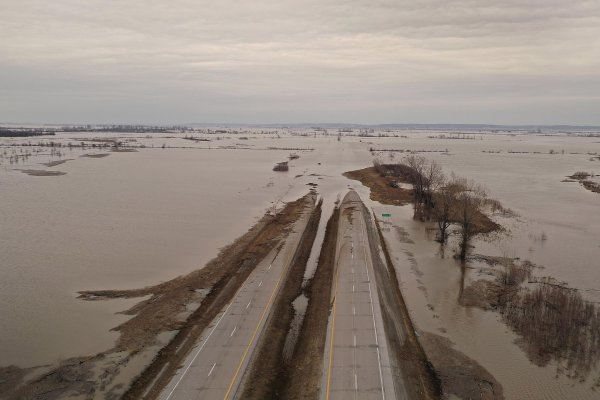 Injuries and Deaths Could Rise with Climate Change in the U.S., a New Study Finds
Next Up: Editor's Pick