Signs are posted outside of a house that was occupied by homeless women in Oakland, Calif., on Jan. 14, 2020.
Jeff Chiu—AP
By Katie Reilly

Homeless mothers in Oakland, Calif., who were living in a vacant house owned by a development company were forcibly evicted and arrested this week.

The women and their children had been occupying the house since November in a protest that drew attention to gentrification and the lack of affordable housing in the Bay Area. Activists criticized the show of force by law enforcement officers who battered down the door to remove them on Tuesday.

“They came in like an army for mothers and babies,” Dominique Walker — a member of Moms 4 Housing, the group of homeless mothers who were occupying the vacant house — told local reporters. “I’m angry that my sisters are in handcuffs, our supporters are in handcuffs right now all because we have the right to housing.”

Alameda County Sheriff’s Sgt. Ray Kelly said three people — two women and one man — were arrested and charged with resisting and obstructing the eviction process, a misdemeanor. A fourth person was arrested outside the house, the Associated Press reported.

The eviction followed an order from Alameda County Superior Court Judge Patrick McKinney on Friday, saying the women—who argued housing is a human right—would have to leave the property within five days.

“This movement is just beginning, and we see what we’re up against, but we also see what they’re afraid of,” Walker said. “We all care and we all have humanity, and we want to change this system that has 4,000 to 6,000 people sleeping on the streets right now.”

The homeless population in Oakland grew 47% between 2017 and 2019, rising to more than 4,000 people as the cost of living in the area skyrockets.

Since moving into the house, Moms 4 Housing members had sought to raise awareness about the lack of affordable housing and the way homelessness disproportionately affects black residents, calling for vacant and abandoned properties to be used as shelter for the thousands in their city who have none.

Wedgewood Properties, a real estate company that describes flipping houses as the “backbone” of its business, bought the property at a foreclosure auction last year for about $500,000, the AP reported.

“Wedgewood is pleased the illegal occupation of its Oakland home has ended peacefully. That is what the company has sought since the start,” Sam Singer, a spokesperson for Wedgewood Properties, said in a statement.

Singer said the company plans to work with a nonprofit to renovate the home, employing at-risk youth and splitting the profits with the organization. “The solution to Oakland’s housing crisis is not the redistribution of citizens’ homes through illegal break-ins and seizures by squatters,” Singer said.

The home is now boarded up with plywood to block entry, and activists have criticized what they saw as excessive measures taken by law enforcement during the eviction. Around 5:15 a.m. on Tuesday, several sheriff’s deputies in riot gear arrived at the house, where a handful of people had kept vigil during the night. Deputies had a ballistic vehicle and used a robot with cameras to survey the home before entering, Kelly said during a press conference Tuesday.

“This is not your typical eviction. I think we can all recognize that,” he said. “This is something that swelled into an enormous movement with a tremendous amount of people that created a series of concerns for safety on a number of levels, so we had to go in there with the right tools. I think we handled this very professionally. I feel that we did a great job.”

“We did have a tactical element out there, and it was rather small,” Kelly said. “We made tremendous steps to make sure that we did not look like a militarized force going in there.”

But Oakland Mayor Libby Schaaf, a Democrat, told reporters she was “pretty shocked” by the tactics used the sheriff’s department.

“My heart goes out to those mothers. These are mothers. They’re not criminals, they are mothers that have engaged in what I believe is a courageous act of civil disobedience to really highlight our housing crisis,” she said. “I was pretty shocked to see the tactics that were used to take them out of the home in the early-dawn hours this morning, and I applaud them for giving everyone the wakeup call that this is unacceptable that mothers have to go to these levels to put a roof over their children’s head, which is a basic human right.”

Meanwhile, Moms 4 Housing members said their fight isn’t over yet.

“We’ve built a movement of thousands of Oaklanders who showed up at a moments notice to reject police violence and advocate for homes for families,” the group said in a tweet on Tuesday morning. “This isn’t over, and it won’t be over until everyone in the Oakland community has a safe and dignified place to live.” 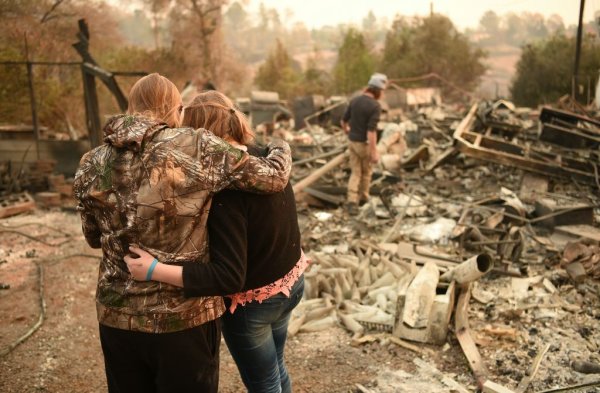