With No Clear Front Runner, 6 Candidates Head Into The Democratic Debate in Iowa

The top tier of Democratic presidential candidates have gathered in snowy Des Moines for the final primary debate before the first-in-the-nation caucuses on Feb. 3, an event that many undecided voters in Iowa will be watching closely.

On Friday, a Des Moines Register poll of likely Democratic caucus-goers put Sanders in the lead for the first time, vindicating a campaign that has held a steady approach throughout the primary as others have seen decline in their support.

The exceptionally close contest, coupled with deepening personal disputes among several of the candidates, have heightened tensions before Tuesday night’s debate. The four front runners will be joined on stage at Drake University by Sen. Amy Klobuchar and billionaire Tom Steyer, the only other candidates to meet the Democratic National Convention’s increasingly steep qualifications for the debates.

“I don’t know that I’ve seen a cycle like this where you have still such a large group of voters that are not talking in candidates that they’re considering, but in groups of candidates that they’re considering,” Matt Paul, an Iowa-based Democratic consultant, told TIME. “There are still a significant group of undecided voters here… I think that this debate is monumentally important.”

The relationships among several of the front runners have devolved into disputes in recent days. A nonaggression pact between the top two progressive candidates, Sanders and Warren, who are personal friends, shattered over the weekend after Politico reported that Sanders’ camp was using talking points criticizing Warren to sway voters.

Sanders tried to downplay the memo his campaign used, which reportedly called Warren the candidate for the elite, and suggested the media was seeking to stir up frictions. “Have you ever heard me say a negative word about Elizabeth Warren?” Sanders asked reporters after a rally in Iowa City on Sunday. “We have hundreds of employees. Elizabeth Warren has hundreds of employees. People sometimes say things that they shouldn’t.”

Hours after his remarks, Warren’s camp sent out a fundraising email on Sanders’s “attack,” calling it “disappointing news.”

“When I heard that description, I didn’t recognize it. That doesn’t describe me or many of the passionate volunteers and organizers I know,” stated the fundraising email from Warren.

Another news report on Monday added to the fray, with CNN reporting that in a 2018 meeting with Warren, Sanders told her he did not think a woman could win in 2020. In the report, Sanders denied arguing that. In a statement released Monday evening about the meeting, Warren said, “I thought a woman could win; he disagreed.”

Those grievances will likely be aired on Tuesday, as will the past week’s developments in US.-Iranian relations, giving the leading candidates a fresh chance to demonstrate their records on foreign policy, or attack their opponents’.

In light of heightened tensions with Iran, Biden, who will have the deepest foreign policy experience on the stage, is likely to be challenged again on the fact that he voted in favor of authorizing military force against Iraq in 2002.

Over the weekend, Sanders again touted the fact that he voted against the Iraq war in the House of Representatives at the time. “It is appalling that after 18 years, Joe Biden still refuses to admit he was dead wrong on the Iraq War, the worst foreign policy blunder in modern American history,” Sanders’ campaign said in a statement on Saturday. “Bernie Sanders saw the same information and had the judgment to vote against the Iraq War.”

Sanders’ campaign added to their attacks on Biden on a separate matter on Sunday, with Ohio state Sen. Nina Turner, one of Sanders’ campaign national co-chairs, publishing an op-ed that appealed to black voters and accused Biden of betraying African Americans. That criticism is particularly stinging for Biden, who spent eight years as a vice president to the nation’s first black President.

Candidates will prepare for the Tuesday event among an ever-narrowing field. Only 12 Democratic candidates remain after Sen. Cory Booker dropped out of the race on Monday. Though Booker’s campaign got off to a promising start, it failed to gain traction among voters, and he had not qualified for multiple debates.

Booker’s absence from the field, after Sen. Kamala Harris dropped out of the race last month and former Secretary of Housing and Urban Development Julián Castro dropped out this month, highlighted again that diversity among the Democratic candidates is quickly disappearing. In the last debate, Andrew Yang was the only non-white candidate. This time, Yang, like Booker, failed to qualify.

— With reporting from Philip Elliott/Washington 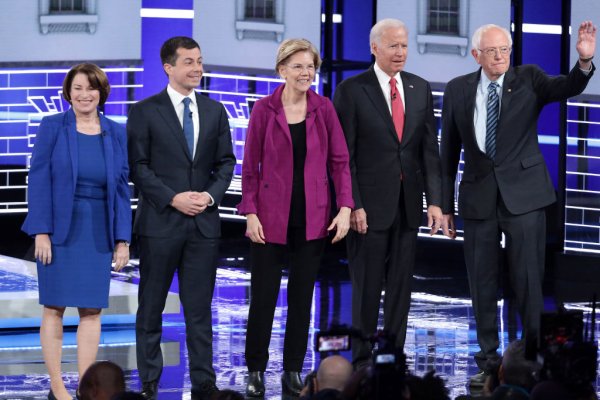 What to Know Ahead of Tonight's Democratic Debate
Next Up: Editor's Pick