'This Is Something New.' Here's How Meghan Markle and Prince Harry's Surprising 'Step Back' Fits Into Royals History

The Duke and Duchess of Sussex surprised the world on Jan. 8 when they announced an unprecedented “step back” from their roles as working members of the royal family.

Outlining their interest in creating a “progressive new role within this institution” for their family while “continuing to fully support Her Majesty the Queen,” Meghan Markle and Prince Harry’s move has royals watchers scratching their heads as the situation unfolds.

Queen Elizabeth II broke her silence on the news in a statement released Jan. 13. “My family and I are entirely supportive of Harry and Meghan’s desire to create a new life as a young family,” she said. “Although we would have preferred them to remain full-time working Members of the Royal Family, we respect and understand their wish to live a more independent life as a family while remaining a valued part of my family.”

Prince Harry spoke out for the first time since the announcement on Sunday. “I’ve accepted this knowing that it doesn’t change who I am or how committed I am,” he said of the decision to step back. “But I hope that helps you understand what it had come to—that I would step my family back from all I have ever known to take a step forward into what I hope can be a more peaceful life.”

Buckingham Palace is still working out what their new titles will be, as commentators noted that the original plan to remove the HRH tag left Meghan with a title usually meant for women who divorced out of the royal family.

Experts with whom TIME spoke agree: there is no true parallel in British royals history to what the iconoclastic pair are now trying to do. “This is something new,” British royals expert Marlene Koenig tells TIME. “We don’t know whether it’s going to be a success or not.” At the time, in response to their announcement, Buckingham Palace released a brief statement noting that discussions about the shape the future would take “are at an early stage” and that these “are complicated issues that will take time to work through.” Those discussions appear to have taken place.

All of which is to say: the lingering questions about the Duke and Duchess’s move are certainly warranted, not least for its historic significance. And while there’s no clear parallel in British royals history, their choices do invite comparison to a few notable cases.

Have any British royals done what Meghan and Harry are trying to do?

In short, no. In British royal history, you’re usually all-in or all-out as a working royal — especially if you still continue to have an official title and to engage in royal activities at some level, as Harry and Meghan intend to — with rare exceptions. And financially, it’s complicated: the Sussexes have stated financial independence as a goal, and to that end, they have decided to forego the perk of the Sovereign Grant, an allocation that funds royal activities and salaries for the office. But they currently still appear to be on the receiving end of funds from Harry’s father in the form of income from the Duchy of Cornwall. “Obviously, a lot of things are paid for by the Duchy of Cornwall,” Koenig notes. “How are they going to finance their lives? Who’s going to cover all of that? Those questions haven’t been answered yet.”

Have members of the royal family stepped away before?

Sort of — but primarily under very different circumstances.

There have been a number of royals who have bucked tradition or moved away from their royal responsibilities or affiliations, often involving marriage, divorce or controversy.

Most recently, the Queen’s third child, Prince Andrew, Duke of York stepped down from public duties this fall, as he had become embroiled in the Jeffrey Epstein scandal. In a statement, he called the newly-focused attention a “major disruption to my family’s work” and said that he had requested the Queen’s permission to “step back from public duties,” which she had granted. Andrew had been brought up in conjunction with Epstein for almost a decade; an allegation that he had sexual relations with a 17-year-old girl resurfaced in light of Epstein’s latest indictment. The prince has denied the allegation, and has not been charged.

Prior to that, Princess Diana — Harry’s mother — was stripped of her royal styling as “Her Royal Highness” after completing her divorce from Prince Charles, Prince Charles, Prince of Wales in 1996. (She retained the title Princess of Wales, however.) The bigger break was with Diana’s relationship to the royal family; while she was still the mother of the future King of England and was regarded as a formal part of the family, the inevitable airing of grievances during the divorce process shifted perceptions on all sides. But that was a divorce, with the accompanying legal status changes; the Duke and Duchess of Sussex aren’t making any legal status changes, and so far appear to intend to maintain their royal titles, given that they even signed their announcement with their titles in intact.

Diana, Princess of Wales, wears an outfit in the colors of Canada during a state visit to Edmonton, Alberta, with her husband.
Bettmann Archive

Love has often thrown the monarchy for a loop. In 1936, King Edward VIII was made to abdicate his throne when he decided to marry American divorcée Wallis Simpson. (At the time, the Church of England disapproved of marriage to divorced partners, and as the figurehead of the Church as King, Edward was beholden to its rules.) However, that abdication was an act of parliament, as the rules of the throne require legal oversight from the governing body. Once he was no longer king, Edward became Duke of Windsor and lived in exile in France, not a working royal at all. “The Duke was stepping away from a clearly defined role as King Edward VIII,” biographer and commentator Sarah Gristwood explains to TIME. In contrast, “Harry’s position is one that second siblings through history have always found difficult.” As Koenig told TIME, “There’s a huge difference… you really can’t compare the situation. They’re not being kicked out; they’ve made a decision to take what they do as royals, but do it on their own terms,” a departure from Edward’s legally-enforced change of status.

Before that, at least one woman in the royal family shared an independent streak. In 1919, Queen Victoria’s granddaughter Princess Patricia shook things up by renouncing her royal title when she married a British naval officer, Alexander Ramsay — an example that royal historian and author Carolyn Harris called out to TIME. And the similarities don’t end there: “Like Harry and Meghan, Patricia had a special relationship with Canada,” Harris adds; her father was the governor general for a number of years, and “Princess Pat” became a popular figure in Canada, even appearing on the $1 bill there. However, as the daughter of the Queen’s third son, her place in the working royal spotlight was considerably different than, say, Prince Harry — who is the son of the future king.

Her situation can be compared today with that of the children of Anne, Princess Royal or Prince Edward, Earl of Wessex, all of whom are styled without royal titles. “They have their own lives, they just happen to be in the public view,” Koenig notes of this set of royal family members. (Princess Eugenie and Princess Beatrice, daughters of Prince Andrew, have the royal titles but do not receive allowances from the Queen or have official patronages through the royal family’s database; their appearances at official engagements are voluntary and independent.)

So while some royals have strayed from the Windsor family path, Meghan and Harry look to be endeavoring to write their own royal rules — which is in keeping with their history-making partnership from the start.

— Additional reporting by Olivia B. Waxman and Rachel E. Greenspan 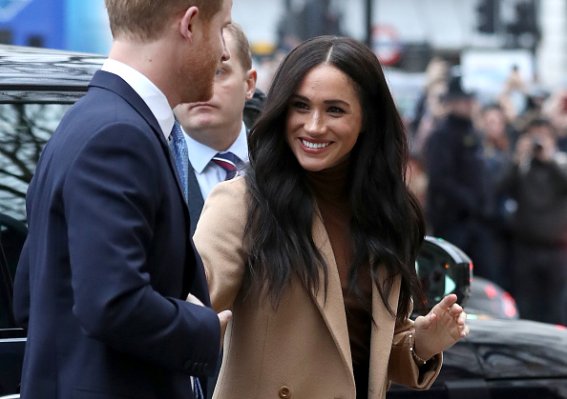 All Your Questions Answered About Prince Harry and Meghan Markle Stepping Back From the Royal Family
Next Up: Editor's Pick