'Living Across Two Continents is Environmentally Unethical.' Australian Actress Yael Stone Is Giving Up Her Green Card to Reduce Her Environmental Impact

Australian actress Yael Stone announced on Tuesday that she plans to give up her United States green card to reduce the environmental impact of living in two countries simultaneously.

Stone starred in Netflix’s Orange Is The New Black — which was shot in the U.S. — and lived primarily in New York between 2012 and 2019. She most recently performed in the play The Beauty Queen of Leenane in Sydney, Australia.

Stone tells TIME in an email that, while living in the U.S. she flew back home to Australia roughly twice a year. “When you live a long way from home you fly often to maintain some kind of connection,” she explains, adding that she’s felt “sick about the gap between my beliefs and my behavior.”

According to environmental nonprofit myclimate, a one way flight from New York to Sydney emits 2.8 metric tons of CO2 per person (in economy class). That’s roughly the same as driving 6,948 miles in a car, according to the Environmental Protection Agency.

“Living across two continents is environmentally unethical. At this time, while my country is on fire… I must put some skin in the game,” Stone tells TIME, citing Greta Thunberg as a particular inspiration. While describing it as both a personal and professional sacrifice, Stone says she is prepared to lose acting roles as a result of her decision. “Though I received my Green Card in September 2019 it seems I will never use it to set up a life in the USA with my family as I imagined.”

Stone adds that, while she will continue to travel internationally “when the right job presents itself,” she plans to invest 50% of her earnings from roles that involved flying into “groups that actively target emission reductions,” such as the Australian non-profit FEAT.

In a video earlier posted to Twitter and Instagram, Stone shared her decision to give up her U.S. green card with her followers. “This is my way of kicking off real 2020 change in my life,” she captioned the video.

Stone said she would begin the process of giving up her U.S. green card and moving back to Australia full time. (According to the U.S. embassy in Australia, an individual must submit a I-407 form to voluntarily abandon their status as a lawful permanent resident in the U.S.)

Stone says she will now dedicate herself to fighting climate change in Australia, and that she’s returned to school to study sustainability. “I hope to be able to use the knowledge in concert with my work as a creative person to make change,” she explains.

In another video shared with her Instagram followers, Stone put it simply: “We’ve only got ten years. So let’s make these sacrifices.”

The United Nations has set a goal of reducing greenhouse emissions by 45% by 2030. A landmark report published by the United Nations’ Intergovernmental Panel on Climate Change in 2018 warned that global carbon emissions must be reduced by that amount by 2030 otherwise the world’s climate world will suffer irreversible damage, including rising sea levels, extreme heat, extreme flooding and extreme drought.

As Greta Thunberg said in her speech before the United Nations Climate Action Summit in September, “The popular idea of cutting our emissions in half in 10 years only gives us a 50 percent chance of staying below 1.5 degrees and the risk of setting off irreversible chain reactions beyond human control.”

Australia is currently suffering from catastrophic bushfires that experts say have been exacerbated by climate change. At least 24 people have died, more than 12 million acres of land have burned and 480 million animals could die, according to scientific estimates. Stone has asked her followers to donate to the Australian Red Cross.

Read more: Australia’s Wildfires and Climate Change Are Making One Another Worse in a Vicious, Devastating Circle

In a separate video posted to Instagram, Stone spoke out against Australia’s Prime Minister Scott Morrison. “Our country is on fire. We’ve lost 14.5 million hectares and our Prime Minister has done absolutely nothing,” she said. Morrison was widely criticized for going on vacation during the early stages of Australia’s bushfire crisis, which he layer apologized for. Morrison has also repeatedly downplayed the role climate change plays in the bushfires and is a public defender of the coal industry.

“We have to step up, because this is war. This is a climate war,” Stone said. “Our enemy is our own behavior.”

“Let’s pressure governments that refuse to act by taking the lead,” she tells TIME. “Because the future needs big movements of people with big imaginations to create a world we haven’t seen yet.” 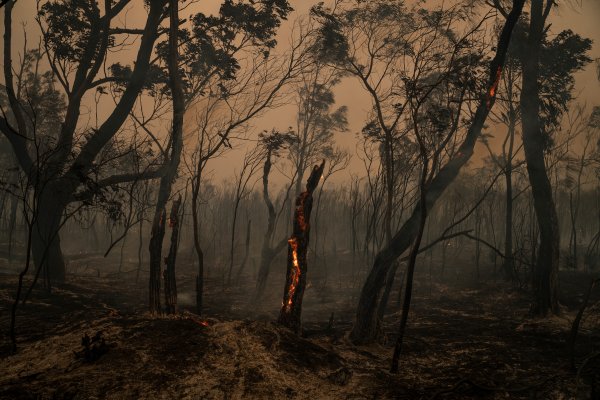 Australia's Wildfires and Climate Change Are Making One Another Worse in a Vicious, Devastating Circle
Next Up: Editor's Pick