Hong Kong Disneyland, which opened in 2005, is the smallest Disney theme park. Hong Kong officials are asking the Disney to allow a tract of land earmarked for expansion to be used for transitional housing, instead.
Justin Chin—Bloomberg/Getty Images
By Hillary Leung / Hong Kong

Hong Kong’s leaders, faced with months of protests and some of the most unaffordable housing in the world, are looking to the “happiest place on Earth” to help ease tensions.

Hong Kong’s Secretary for Transport and Housing urged the operators of Hong Kong Disneyland on Monday to release a tract of land earmarked for the park’s future expansion. Frank Chan said it could be put to better use as a site for transitional homes for those on the city’s long waitlist for public housing.

Government leaders have maintained that economic issues—high cost of living and a lack of upward social mobility—are to blame for the disaffection. The government’s annual policy address, given about four months after the protests began, focused on alleviating the city’s housing shortage. Providing 10,000 transitional housing units was one of the goals outlined in the address.

Protests began in response to a controversial extradition bill that would have allowed fugitives to be sent to mainland China to stand trial. The movement quickly widened into a call for the right to elect the territory’s leader and for greater autonomy from Beijing.

Speaking to lawmakers in a legislature meeting, Chan acknowledged that the site currently cannot be used for residential purposes, according to the land contract.

“But we hope Disneyland can consider its social responsibility and allow an exemption, so that the site can be used for transitional housing,” Chan said.

The 148-acre piece of land is reserved for a second-phase development of the theme park, which opened in 2005. Suggestions for the tract to be converted to housing have been made before.

A Hong Kong Disneyland spokesperson told the South China Morning Post that the question of the park’s development is “a matter for discussion between the two shareholders—the Hong Kong government and the Walt Disney Company.” Disney representatives did not respond to TIME Tuesday.

Close to half of Hong Kong’s population of 7.5 million lives in public housing, which has an average wait time of more than five years to get an apartment. More than 200,000 live in subdivided flats carved out of walk-up apartments, some of them illegal, where residents are exposed to fire safety risks and environmental and hygiene hazards, according to a 2018 legislative report.

The Hong Kong Disneyland is the smallest Disney park and has been recording losses since opening more than a decade ago. Last year, it posted a deficit for the fourth straight year. Ongoing protests pose a further challenges.

Visitors to Hong Kong fell by close to 60% in December, the sharpest drop since the demonstrations—which have often turned into violent confrontations with police—began seven months ago.

Walt Disney’s Chief Financial Officer Christine McCarthy said that operating income at the park could decline by about $275 million in the fiscal year ending September 2020 if the unrest continues. It has already lost more than $55 million, according to numbers from November.

Ocean Park, a competitor theme park to the Hong Kong Disneyland, said last week that a decline in visitor numbers has forced it to freeze the salaries of its workers to avoid lay-offs. 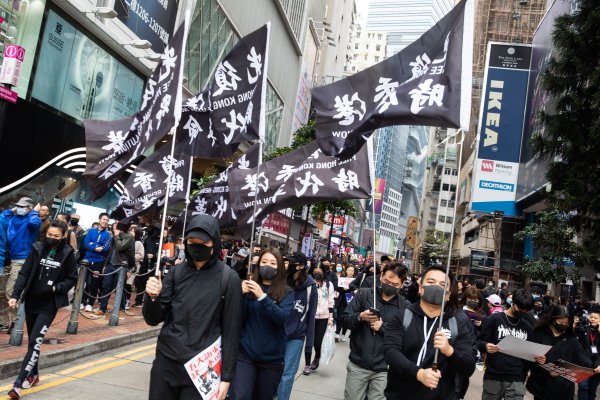