Tom Hanks is an Oscar-winning actor, a national treasure, devoted family man, noted nice guy, and, as of last night at the 2020 Golden Globes, the recipient of the Hollywood Foreign Press Association’s Cecil B. DeMille Award for Achievement in Film and the perfect reaction meme for most awkward situations.

The meme-able moment came during the opening monologue from host Ricky Gervais. Hanks was sitting front and center with his wife, Rita Wilson, when Gervais launched into his opening remarks. “I came here in a limo,” Gervais said, “and the license plate was made by Felicity Huffman.” The camera panned to Hanks, who appeared to make his feelings known during the comedian’s jab at the actor who went to jail for her role in the college admission scandal.

Because Hanks is the gift that keeps on giving, both onscreen and online, that reaction wasn’t the only meme-able facial expression of the evening. Another came later in the speech, when Gervais implored the stars, “Come up and accept your little award, thank your agent and your god, and f–k off.” The savvy camera operator once again cut to Hanks in time to see a very visible expression. That look, which may be the physical embodiment of the word “yikes”, quickly captured the heart and imagination of the internet, which collectively immediately set out spreading the newly-minted legendary meme as a thank you. 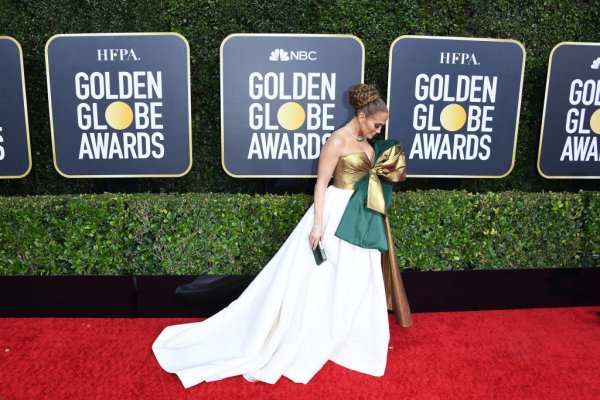 Jennifer Lopez’s Present Dress Bestowed Endless Gifts on Us as the Season of Giving Continues
Next Up: Editor's Pick