Maryland police are searching for a driver who lured a flock of seagulls to a parking lot and then ran over them with a vehicle, killing at least 10 birds in what the city’s police department have described as a “senseless act of violence against animals.”

Officers in Laurel, Md., a city 20 miles northeast of Washington D.C., were called to the parking lot of the Laurel Plaza Shopping Center on Saturday after receiving a report of animal cruelty, according to a police statement. They found a group of dead seagulls lying “extremely” close together.

“Officers learned that a subject purchased a bag of pre-popped popcorn from the Dollar Tree [grocery store],” police said. “That subject then emptied the bag of popcorn in the parking lot intentionally luring the group of seagulls.” The subject then got into a vehicle and used it to run over the birds that had gathered, killing at least 10 before fleeing the scene, police added.

Police believe the incident took place between 9 and 10.30am on Saturday.

On Sunday police shared an image of an injured seagull that had been rescued by an officer – apparently the lone survivor of the attack. The bird, which had a broken wing, was taken to a local wildlife center. 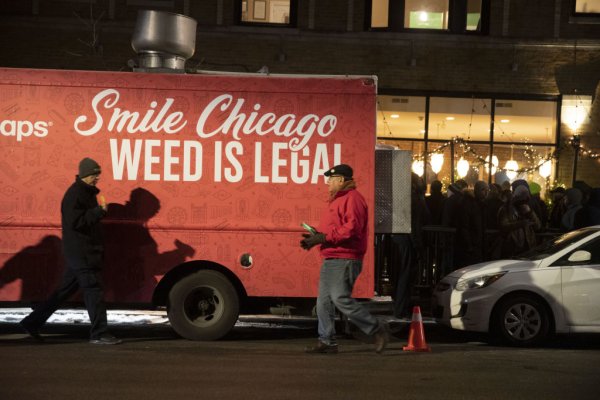 Illinois Rakes in Nearly $3.2 Million on First Day of Recreational Cannabis
Next Up: Editor's Pick