By W.J. Hennigan and Kimberly Dozier

The Iraqi parliament approved a draft bill Sunday requiring the government to ask Washington to withdraw American troops from the country. The move is largely symbolic, as it sets no timetable for withdrawal and is subject to Iraqi Prime Minister Adel Abdul Mahdi’s approval. But it reflects mounting volatility facing U.S. forces in the region, and the uncertainty of U.S. strategic interests there in the wake of the American drone strike that killed a top Iranian official Thursday.

During the Iraqi parliament’s emergency session, in which some members repeatedly chanted “no to America,” Mahdi revealed new information about the run up to the American drone strike that killed Qasem Soleimani, a prominent Iranian military leader who commanded the country’s elite Quds Force. Mahdi said President Donald Trump called him and asked him to mediate with Iran even as the American president was secretly ordering Soleimani’s killing. Mahdi also said he was set to meet Soleimani, who was carrying a response to an initiative from Saudi Arabia intended to deescalate tensions.

Mahdi urged parliament to rescind its 2014 invitation to U.S. forces, which was made when ISIS was embarking on a lightning offensive across Iraq and Syria that ultimately resulted in the militant group capturing territory roughly the size of Britain. He stressed that a timetable be established so an orderly withdrawal could be carried out.

But parliament’s resolution amounts to a symbolic measure, as the current caretaker government doesn’t have the legal power to carry it out, Farhad Alaaldin, former advisor to Iraqi President Barham Saleh tells TIME. “It would be up to the new government to take this forward,” said Alaaldin, now chairman of Baghdad-based think tank Iraq Advisory Council. Mahdi has been a caretaker prime minister since he resigned after weeks of mass protests over government corruption this past fall.

Secretary of State Mike Pompeo shrugged off the vote as that of a resigned prime minister “under enormous threats from the very Iranian leadership that we are pushing back against… We are confident that the Iraqi people want the United States to continue to be there to fight the counter-terror campaign,” he said on Fox News Sunday.

But the symbolic vote nevertheless matters as a sign of the uncertainty and volatility sweeping the region in the wake of Soleimani’s death.

Kurdish and Sunni politicians largely boycotted the vote. Those two groups fear a U.S. troop departure would result in other allied countries withdrawing, and would trigger a flight of Western investment. “If the U.S. training mission leaves, you can expect a fairly quick departure of other foreign missions including NATO, for a host of reasons, among them, force protection,” says Barbara Leaf, a former U.S. ambassador now at the Washington Institute for Near East Policy.

Most factions also fear a U.S. departure could produce a resurgence of ISIS. While ISIS has largely been defeated in Iraq, thousands of fighters remain and continue to launch attacks in Iraq and Syria. American forces remain in both countries to ensure the surviving militants do not regain power and territory.

Even before the Iraqi vote Sunday, the U.S.-led military coalition said it has “paused” training and operations to counter the terror group in Iraq in order to protect bases from outside attack. The announcement came after the drone strike against Soleimani.

Iranian officials have promised “harsh revenge” for Soleimani’s assassination, which Trump responded to by threatening to target “52 Iranian sites,” including “some at a very high level & important to Iran & the Iranian culture.” Iran’s Foreign Minister Javad Zarif counter-tweeted that targeting sites of cultural significance is a war crime.

A U.S. military official said on Sunday that he was unfamiliar with any list of exactly 52 targets. “There are different lists, depending on the nature of the possible targets — missile bases, nuclear facilities, naval bases, airfields, et cetera — but I don’t know of a list that adds up to that number or one that includes cultural or historic sites like Persepolis.”

The decision to kill Soleimani, carried out on Trump’s order, caught U.S. military and intelligence officials by surprise. One senior military official familiar with the proposed retaliatory actions for further Iranian-backed attacks on U.S. or coalition forces said the only more severe measure would have been strikes on Quds Force bases or leaders inside Iran, which some officials warned would have been a clear act of war.

Intelligence officials also had warned of an Iraqi popular and political backlash against stepped-up U.S. strikes on Shiite militias, especially against a backdrop of previous civilian casualties. But on Saturday and Sunday three officials said it was not clear whether Trump had considered that warning and others about Iranian retaliation in making his decision. “Many Iraqis, especially among the majority Shiites, don’t think of us as liberators, but as occupiers,” said one former military intelligence officer who served multiple tours in Iraq.

Over the past six months, Iranian-backed proxy forces has been accused of several attacks in the region, including a recent rocket attack on a military base in Iraq, which killed an American contractor and injured four U.S. service members working to fight ISIS, also known as Daesh. “Our first priority is protecting all Coalition personnel committed to the defeat of Daesh. Repeated rocket attacks over the last two months by elements of Kata’ib Hezbollah have caused the death of Iraqi Security Forces personnel and a U.S. civilian,” the U.S.-led coalition said in a statement. “As a result we are now fully committed to protecting the Iraqi bases that host coalition troops. This has limited our capacity to conduct training with partners and to support their operations against and we have therefore paused these activities, subject to continuous review.”

The coalition issued its statement before the Iraqi parliamentary vote, but added: “We remain resolute as partners of the Government of Iraq and the Iraqi people that have welcomed us into their country to help defeat ISIS,” the statement said. “We remain ready to return our full attention and efforts back to our shared goal of ensuring the lasting defeat of Daesh.” 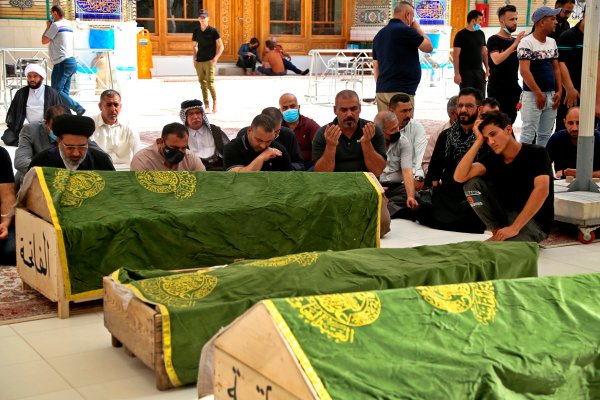