Ross Perot spent December 1969 collecting postcards. As the 1960’s came to a close, Americans, whatever their political orientation, were weary – riots in the cities, the assassinations of Martin Luther King and RFK, seismic changes in the culture and 47,752 and counting Americans dead in Vietnam. Ross Perot’s politics were conservative, and he had observed with growing distaste the antics of the Vietnam War protest movement, which had grown militant in 1969. It represented everything that Perot thought was wrong with young Americans: a lack of patriotism; a disdain for free enterprise; sloppy appearance; and a lack of discipline. To counter a massive antiwar march on Washington in November, Perot paid for the printing and distribution of 25 million postcards in support of President Nixon, reading “Mr. President, you have my support in your efforts to bring about a just and lasting peace,” to be mailed back to the organization Perot formed for the purpose of receiving them, “United We Stand.” While Perot’s postcard drive garnered a bit of national press, it hadn’t made the media splash Perot had hoped for. Nothing if not persistent, Perot soon cooked up another venture.

To the extent Americans had heard of Ross Perot at the time, it was likely because of the blockbuster IPO of his computer company, Electronic Data Systems Corp., in September 1968. Offered at $16.50 per share, it was soon trading at ten times that price and Ross Perot became the world’s first tech billionaire. Perot was born and raised in east Texas and after graduating from Annapolis in 1953 and serving his four years of active duty in the Navy, took a job at I.B.M. in Dallas selling computer systems. He was the greatest salesman in I.B.M.’s storied history. He sold so many computers that he repeatedly refused promotions, as taking a salaried executive position would have dramatically reduced his salary. He was selling so many computers that I.B.M. had to take drastic action to reign in his compensation, cutting his commission rate by 80% and assigning him a “reverse quota” – an annual sales above which he would receive no commission. In 1962, Perot achieved this reverse quota, on January 19.

Disgusted with I.B.M., he quit a few weeks later and formed Electronic Data Systems with $1,000 of capital. In 1965, after the Medicare legislation was passed, Electronic Data Systems won the contract from Texas Blue Shield to automate the payments processing for the program. Soon, Electronic Data Systems had similar contracts in ten other states. By 1968, New York investment bankers were beating a path to Perot’s door begging to take him public. Perot, the homespun Eagle Scout suspicious of everything Eastern, particularly Wall Street, turned them away, all but one. For reasons no one can quite explain, Ross Perot took a strong liking to a tall, tough-talking young Italian American banker, Frank Langone, from the second-tier investment bank R.W. Pressprich and Company. R.W. Pressprich would take Electronic Data Systems public, and Frank Langone would become a legend on Wall Street and a billionaire himself, founding successful companies like Home Depot and becoming a governor of the New York Stock Exchange.

On December 15, 1969, Ross Perot called a press conference to announce that United We Stand would charter a plane to take humanitarian supplies and Christmas presents to American prisoners of war held in North Vietnam. He told the press he had sent a telegram to Pham Van Dong, the Premier of North Vietnam, asking for permission to land in Hanoi, but had not yet been given a response. In any event, Perot said, the plane would depart Los Angeles International Airport the following week. Perot also announced that United We Stand would be sponsoring trips by the wives and children of American prisoners of war to go to the Paris peace talks and lobby North Vietnamese officials for their release. On December 19, Perot summoned the press again. United We Stand would now be sending 150 wives and children to Paris and two planeloads of supplies and Christmas presents to Hanoi. He conceded he had not heard from the North Vietnam government as whether he’d be allowed to land the planes he had chartered for the trip.

The following day, Hanoi responded. North Vietnam promised that the American prisoners would receive all gifts sent via existing protocols – the postal route through Moscow – but under no circumstances would Perot’s planes be given clearance to land in Hanoi. Undeterred, Perot told the press the planes would be taking off for Bangkok the next day. “We have sent a return cable to the North Vietnamese explaining that the purpose of our trip is to improve the relationship between the people of the United States and the people of North Vietnam,” he told the New York Times. “Allowing private American citizens to bring Christmas directly to these men would be a major step toward improving relationships between our people. We are still confident that once the North Vietnamese fully understand the purpose of our mission and the desirable effect it will have between the people of both countries they will allow us to enter.”

On December 21, Perot left Love Field in Dallas aboard the first of the two chartered jets, which he christened the “Peace on Earth,” en route first to Los Angeles to load the supplies and then on to Bangkok. The second plane, which Perot named the “Goodwill Toward Men,” would leave the following day. On December 24, Perot and a contingent of Red Cross volunteers and reporters aboard the Peace on Earth landed in Bangkok, Thailand with 75 tons of Christmas gifts, food and medical supplies. He met with North Vietnamese officials to convince them of the merit of his mission. The North Vietnamese, however, hadn’t budged. On Christmas day, 150 family members of American POWs landed in Paris seeking to meet with the North Vietnamese delegation at the Paris peace talks in order to obtain the release of their loved ones. The North Vietnamese refused to meet with them. After only six hours on the ground in Paris, they boarded the plane and returned to New York. Perot spent Christmas in Laos. The following day, he met with North Vietnamese diplomats there, but with the same result. That afternoon, he announced he was abandoning the mission to North Vietnam, but would seek to have the supplies delivered on his behalf by the Soviet Union. On December 27, back in Bangkok, Perot held another press conference, this time announcing that the Peace on Earth would be flying to Moscow to deliver the aid packages. Perot had hoped to fly from Bangkok to Rome and an audience with Pope Paul VI – hoping to enlist the Vatican’s blessing for his mission – before flying to Moscow, but the western route was denied him when Burma and India, at the request of the Soviets, refused to allow Perot to fly across their airspace. So on December 28, Perot flew east, over the arctic circle, for a 12-hour layover in Anchorage, Alaska, before resuming the easterly journey to Copenhagen, Denmark. Two days later, on New Year’s Eve, Ross Perot, still in Copenhagen, announced that the Soviets had formally denied his visa application and that he and his planes would be returning home.

Perot spent $1.5 million on the aborted mission, a financial debacle. But he had captured the heart of a weary America. His supersonic patriotic quest to aid the POWs became daily front page news in papers around the country during the 1969 holiday season, including the New York Times which covered his every stop and every pronouncement. Perot represented an American ideal seemingly lost that winter: the rugged individualist, the Texas cowboy leading the cavalry to fix the mess the Best and the Brightest in Washington made of that decade. Unfortunately, Hanoi and Moscow had other plans. 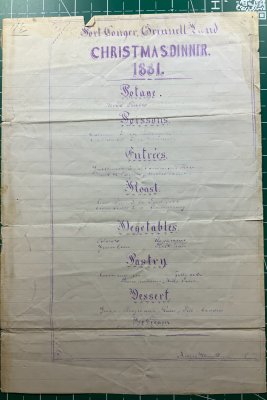 The Story of an Extravagant Christmas Dinner Near the North Pole in 1881
Next Up: Editor's Pick