The assassination of Iran’s Quds force commander Qasem Soleimani is a game changer in the U.S.-Iran standoff.

Since the U.S. withdrawal from the Iran nuclear agreement in May 2018, Tehran and Washington have cycled through escalatory tensions and mutual provocations, but they have avoided direct conflict by respecting each other’s red lines.

This year, the cycle intensifed as Iran and its proxies attacked tankers in the Persian Gulf, downed a U.S. drone and struck Saudi oil facilities. But it was the killing of an American contractor in a rocket attack on Dec. 27 that provoked a dramatic U.S. response. Whether it was a deliberate move to goad the U.S. into wider action or a misreading of the Trump administration’s appetite for conflict, the resulting assassination has opened a Pandora’s box in the Middle East.

The U.S. signaled a shift in American strategy towards Iran on Thursday, when Secretary of Defense Mark Esper announced that “attacks against us will be met with responses in the time, manner, and place of our choosing.” Coming on the heels of U.S. missile strikes in Iraq and Syria, the killing of Soleimani is Washington’s strongest message to date that its rules of regional engagement have changed.

Soleimani’s death is clearly designed to forestall further attacks, demonstrate American intelligence capabilities and push back with clear red lines against a wave of Iranian regional pressure seen over the past year in Iraq, Syria and the Persian Gulf.

But a strong response to his death by Iran is all but guaranteed. Soleimani was a popular national figure, military strategist and the public face and arbiter of Iran’s regional foreign policy, having cultivated strong relationships with non-state actors around the Middle East in Lebanon, Iraq, Syria, Afghanistan and Yemen. Once he has been laid to rest, Tehran will be out for “severe revenge” as tweeted by Iran’s Supreme Leader Ali Khamenei.

Escalation should be expected in three obvious arenas: Iraq, the Persian Gulf and in the tenuous nuclear agreement, or JCPOA, with Iran. The regime will be looking to directly push back against the U.S. as well as spread and impose costs of potential conflict on regional neighbours and the international community.

Iraq is the most obvious theatre for initial conflict to begin. Having experienced months of protests against the political establishment, the Iraqi leadership is fragile yet beholden to pressure from Iran and the U.S. Since the 2003 war began, Tehran and Washington have long been operating in tandem throughout Iraq. Abu Mahdi al Muhandis, the leader of the Khataib Hezbollah militia and a friend of Iran’s leadership, was also killed alongside Soleimani.

Iraqi political leaders from all sides of the political spectrum, including the influential Shi’ite leader Grand Ayatollah Sistani, have condemned the attacks knowing full well that the risk of escalation will have implications for Iraqi stability. American military personnel and civilians will most immediately be open targets for direct and indirect Iranian-backed strikes while Iran fans the flames of anti-Americanism.

Then there’s the Persian Gulf. With significant American personnel also posted there, Iran could replicate similar attacks on shipping tankers and Arab Gulf infrastructure to pressure and transfer costs of conflict to the United Arab Emirates and Saudi Arabia. Indirect missile attacks from the Houthis in Yemen could also recommence halting any potential efforts at resolving the Yemen war.

Finally, Iran may step up its nuclear activity. If, as expected, its fifth breach of the JCPOA is announced by Jan. 5 it will be telling of Iran’s intentions and willingness to amp up pressure. Tehran has hinted that it could raise enrichment levels to 20% a move that would raise further red flags in Europe. More dramatic steps could lead to Iran leaving the deal and even taking steps to exit the non-proliferation treaty further inflaming tensions with the remaining signatories of the JCPOA.

While it is yet unclear exactly how Iran will choose to respond, any and all of these moves would suggest that Tehran has a number of options where it can take revenge and demonstrate its escalatory potential.

Direct military war is not yet guaranteed; Tehran may be calculating that spreading the cost of instability across the region and into Europe might convince Washington to be judicious in reacting further. But for the first time in decades, the prospect of direct conflict between Iran and the U.S. is coming clearly into focus. 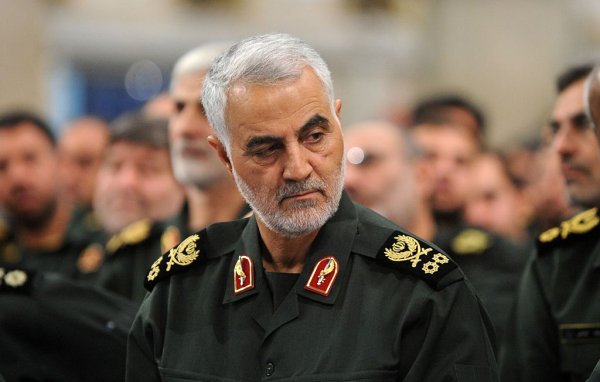 U.S. Allies React With Cautious Support After Soleimani Killing
Next Up: Editor's Pick