Leonardo DiCaprio is an established moment machine and Sunday night’s Oscars 2020 affair was no exception.

The Once Upon a Time in Hollywood actor and environmental activist’s antics were on full display during the 92nd Academy Awards broadcast when he got into Janelle Monae’s groove during the opening number.

Holding court at the Beverly Hilton, this never more celebratory guy smiled and nodded along with the endlessly talented showstopper Monae during her incendiary opening number. And she even got him singing in addition to her delightful interactions with several luminaries in the front row.

Of course, tweets about the moment Monae shared with Leo came in full force when he sang along. There even appeared to be a brush with her Midsommar-esque floral drape.

He’s always good for a chuckle. Look no further than his summer 2019 clash with a volleyball, the time he was snapped strolling on the set of the Christopher Nolan movie Inception, or blessedly, predictably, how his champagne glass toast from The Great Gatsby became inescapable.

Nothing may ever rival his iconic eyebrow raise as Gaga brushed past his elbow in a floor sweeping gown, which thrilled viewers far beyond 2020.

But this was pretty fun.

Enjoy a hilarious ride through the reactions to Leonardo DiCaprio’s Oscars 2020 moment below. 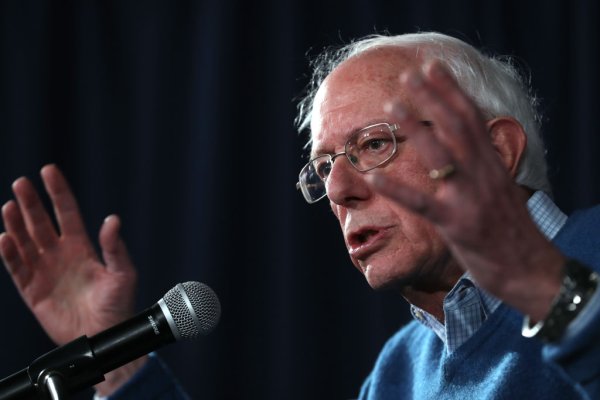 The Bernie Sanders Meme Pile on Has Commenced With 'Bernie Board' and 'Once Again Asking for Your Support'
Next Up: Editor's Pick