Donald J. Trump’s decision to escalate the U.S. confrontation with Iran by authorizing an airstrike that killed two of its top military leaders comes as he finds himself in a precarious, unprecedented position: facing a trial in the Senate and entering the 2020 campaign as the first President in history to run for re-election after being impeached.

Trump’s decision to launch a drone strike in Baghdad that killed Qasem Soleimani, commander of Iran’s Quds Force, and Abu Mahdi al-Muhandis, Iran’s main liaison to proxy militias in Iraq, is destined to ignite the polarized politics at home, raising questions over the timing of the attack as a likely impeachment trial nears and the presidential race heats up.

The public “is always going to be wondering how much of this was a policy decision versus a political decision,” says Julian Zelizer, professor of history and public affairs at Princeton University.

In his first public comments about the strike on Friday, Trump said the move was intended to stave off future attacks against U.S. personnel. “We took action last night to stop a war,” he said, speaking at his Mar-a-Lago resort in Florida. “We did not take action to start a war.” Soleimani was planning “imminent and sinister attacks,” Trump said, without providing specifics.

Trump isn’t the first President to take military action during a high-stakes domestic political situation. President Bill Clinton ordered airstrikes on Iraq in 1998, in the midst of his own impeachment. The notion that Trump ordered the strike for political gain is “utterly ridiculous,” Tim Murtaugh, director of communications for Trump’s re-election campaign, tells TIME. Trump acted in light of “recent attacks and ongoing planning for future attacks,” Murtaugh says. “How much is the United States expected to take before it fights back?”

Secretary of State Mike Pompeo wrote on Twitter that Trump ordered the attack to defend against “imminent threats to American lives.” Rep. Doug Collins, the top Republican on the House Judiciary Committee, told TIME the move showcased Trump’s willingness to act. “It just shows the difference in a President who will make a decision and follow through on what he says he is going to do,” says Collins, a chaplain in the U.S. Air Force Reserve who is close to the White House. “I think it’s very real with this President that if you attack. It goes back to a personal philosophy. He doesn’t let things go unanswered.”

Senator Lindsey Graham, a Republican from South Carolina and close ally of the president, told Fox News on Friday that he was briefed about a potential operation during his recent trip to see Trump in Florida; Graham was with the President at the Trump International Golf Club in West Palm Beach on Dec. 30, days before the strike. “The intelligence was very strong that Soleimani was orchestrating chaos in Iraq at our expense and throughout the region, the President was informed of these potential attacks, and he acted,” Graham said.

Yet the fact that Trump notified senior Republican lawmakers about the operation but left Democrats in the dark was a breach of protocol that heightened the political backlash. Senate Democratic Leader Chuck Schumer, Speaker of the House Nancy Pelosi and Senate Intelligence Committee Chairman Mark Warner were not informed in advance of the strike against Soleimani, according to congressional aides. There are ongoing discussions between the Administration and Congress about briefings with the House Armed Services Committee “early” next week, an aide said. Senate Republican Leader Mitch McConnell said Friday that he’s working to arrange a classified briefing for senators next week.

Democrats say they now worry that the situation will spiral out of Trump’s control. Past Presidents didn’t make the same call when considering how to respond to Soleimani’s military sponsorship that has killed hundreds of American troops. “We didn’t lack for opportunities to go after [Soleimani] or other Iranian leaders, but we also understood the consequences of taking that action,” says Brett Bruen, a former NSC official under President Barack Obama. “And you only do so if you put in place a really sound, smart strategy.”

White House and Pentagon officials remained tight-lipped about the details of the decision and the military operation on Friday. After his five-minute televised address, Trump left the podium without taking any questions or providing details about what Soleimani was plotting or how the operation occurred. He did issue a warning to Iran. “If Americans anywhere are threatened we have all of those targets already fully identified and I am ready and prepared to take whatever action is necessary — and that in particular refers to Iran,” Trump said.

The Trump campaign, meanwhile, praised the President’s decision and touted the news on social media Friday. “This was a display of American strength,” campaign spokeswoman Kayleigh McEnany said on Fox. “He was resolute.” A Twitter account run by the Trump campaign tweeted a series of happy tears emojis above a video of an Iranian Revolutionary Guards spokesman crying on television over the news of Soleimani’s death.

Whatever Trump’s motivations for killing Soleimani at this particular moment, it is hard to predict how the move will impact the President’s re-election bid, says Zelizer of Princeton.

“Nothing moves public opinion at this point,” he says, “and certainly it’s not as if people who don’t like Trump are suddenly going to love him because of a successful military operation.”

—With additional reporting by Alana Abramson/Washington 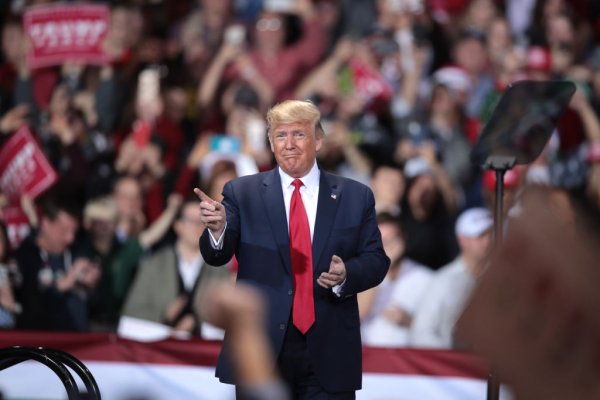 Trump Sails Through Rally as House Votes to Impeach Him
Next Up: Editor's Pick