(Bloomberg) — More than a million Russians have been caught up in the worst wave of bomb threats in years, sending people to social media for information about events largely ignored by Kremlin-controlled national television.

While all of the threats to date have been hoaxes, bomb squads have descended upon schools, airports and shopping malls to investigate the calls, according to news reports from around Russia. In Moscow alone, more than a million people have been evacuated since Nov. 28, according to Interfax.

The number of threats appears worse than a 2017 epidemic, when about 2,500 places received fake bomb threats in 75 regions around Russia over a four-month period.

“This is a large-scale phenomenon,” said Alexander Khinstein, a member of the ruling United Russia party who sits on the lower house of parliament’s security committee. “We are dealing with cyber-terrorism here.”

The source of the calls hasn’t been established, but Russia has been targeted by terrorist groups, including Islamic State, in the past. The Federal Security Service, or FSB, detained two suspects in St. Petersburg last week after receiving intelligence from the U.S. about a possible attack.

Several law enforcement agencies contacted by Bloomberg did not respond to requests for comments.

The situation has attracted official attention this year, with security services giving a closed briefing for lawmakers explaining the problem, according to Khinstein.

However, the 72% of Russians who get their news from television have been kept in the dark, with the main federal channels choosing to ignore the epidemic, opting instead for spots on President Vladimir Putin’s every move and year-end summaries.

During the 2017 outbreak, coverage was more frequent. At the time, Alexander Bortnikov, the director of the Federal Security Service, announced in early October on national television that they’d found the culprits, only to see the problem drag out for another three months.

In the absence of news coverage, a video statement by the deputy head of Moscow’s Department of Education about the bomb threats against schools received nearly 100,000 hits on YouTube and was widely shared on social media.

“Parents have started to panic, they have pulled their children from classes and nobody knows when this will end,” said Nadezhda Ivanchenko, a teacher at a Moscow school that has been targeted eight times in December. “The strangest thing is that nobody understands what’s happening and there’s no official explanation.”

The disruptions have stretched across the country, including in Khabarovsk, more than 13,000 kilometers (8,100 miles) to the east of Moscow. That city has been hit with numerous threats, with the airport and main rail station evacuated last week. More than 11,000 children had to leave their schools on Dec. 19 with the temperature at -20 degrees Celsius (-4 degrees Fahrenheit).

“Before there were bomb threats, but they usually targeted business centers and the perpetrators tried to collect ransom,” Ruslan Sokolov, a spokesman for Khabarovsk’s mayor, said. “This time it’s different.” 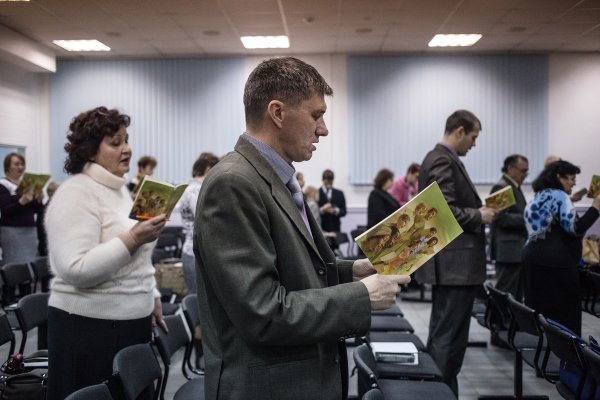 Russia Stepping Up Persecution of Jehovah's Witnesses
Next Up: Editor's Pick