A Woman Mouthed 'Help Me' in a Calif. McDonald's Drive-Thru Line. Employees Had a Plan

When a distressed woman mouthed the words “help me” to a McDonald’s employee while going through the drive-thru earlier this week, staff at the Lodi, California restaurant worked quickly to ensure her safety.

The woman had entered the restaurant just after 2 p.m. on Tuesday afternoon when she asked an employee to call 9-1-1. She gave them the license plate of the vehicle she was traveling in and asked them to hide her, the San Joaquin County Sheriff’s Office said in a statement. But after using the restroom and trying to order at the counter, a man accompanying her “demanded she use the drive-thru” instead.

It was in the drive-thru line that she silently asked for help. Employees again noticed her request and took action.

Shortly afterwards, deputies arrived on the scene and spoke to staff, according to the sheriff’s office. Officers then located the vehicle still in the drive-thru line and ordered that the woman pull over.

Authorities said that during the course of their investigation they learned that the man present in the car with the “shaken” woman who had called for help, Eduardo Valenzuela, had previously been violent with her, and had “threatened her life, saying he would use a firearm.” Law enforcement noted that they located a firearm, which was stolen from out of state, in the trunk of the car.

He was subsequently arrested and booked in the San Joaquin County Jail on charges of criminal threats, stolen property and possessing a firearm as a felon.

“We are lovin’ it! McDonald’s providing a ‘SAFE PLACE’ for abuse and human trafficking victims aids woman to be rescued,” the sheriff’s office said in its statement. “A victim is safe thanks to the McDonald’s crew.”

McDonald’s also praised the staff members on the Golden State McDonald’s Facebook page, saying “we are proud of our team” in a statement. The statement noted the restaurant’s support from A Safe Place, a national outreach program for young people requiring immediate help and safety. The Safe Place initiative lays out a plan and specialized training for staff members in schools, libraries and other locations to respond appropriately to individuals who express a need to leave an unsafe situation, including those who are trying to escape abusive circumstances or are being trafficked.

“It’s amazing to know that this training that we provide to our team that they never expect to use is put into motion so quickly,” Carli Schrader, owner-operator of the Golden State Restaurant Group told ABC 10, a California news channel.

“Our restaurant manager had our employees actually hold up the drive-thru line so that we were then able to stop that car from moving forward,” Regina Camera, marketing manager of the Golden State Restaurant Group told CNN.

Just last month, another woman’s careful call for help with regards to an abusive situation was answered in Ohio by an emergency dispatcher. A woman called 911 under the guise of ordering a pizza but the dispatcher sensed that something was amiss. The woman gave the dispatcher her address, police rushed to the scene and arrested a man for domestic violence. 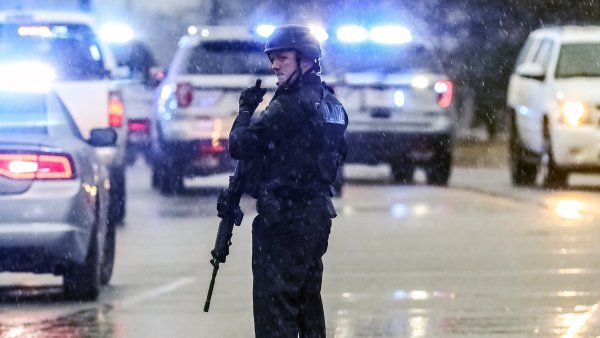 Employee Dies After Shooting at Dart Container Facility in Georgia
Next Up: Editor's Pick