The Darksaber Made a Crucial Appearance in The Mandalorian's Season Finale. Here's Its Significance in Star Wars Lore

The first Star Wars live-action television show, The Mandalorian on Disney+, made the most of Star Wars lore in its first season, which wrapped up with an explosive episode directed by Taika Waititi on Friday. In eight episodes, the show delved into the origins of the Mandalorian creed, gave fans insight into the political fallout of the Rebellion against the Empire and introduced an adorable, young member of Yoda’s unnamed species. (It also gave us an unexpected cameo from Jason Sudeikis as a Stormtrooper who punches said cutie.)

But perhaps the most thrilling callback to franchise folklore came in the final moments of the season finale when the villain Moff Gideon (Giancarlo Esposito) cut himself out of his crashed ship using a black lightsaber. The weapon has not appeared in any of the live-action films, but it is famous in the Star Wars extended universe. It’s called a Darksaber, and it used to be a prized weapon among the Mandalorians—before Moff Gideon got his hands on it.

Lightsaber colors have evolved along with the Star Wars saga. In the first two films, A New Hope and Empire Strikes Back, sabers were exclusively blue (for Jedi like Luke Skywalker) and red (for devotees of the Dark Side like Darth Vader). Filmmakers introduced a green lightsaber in Return of the Jedi so that Luke could fight with a saber that stood out against the bright blue sky of Tatooine in the scene where he, Leia and Han escape Jabba the Hutt. (Up until then, lightsaber fights had taken place exclusively in dim locales.)

Samuel L. Jackson requested that his character Mace Windu wield a purple lightsaber in the prequel movies so that he could stand out during large fight scenes, like the one in the arena on Geonosis in Attack of the Clones. And (spoiler alert for The Rise of Skywalker) Rey builds herself a new, yellow lightsaber at the end of the most recent Star Wars trilogy.

But the Darksaber has only appeared in Star Wars television series, never on the big screen. It made its debut in a 2010 episode of the Clone Wars animated series, carried by a man named Pre Vizsla (voiced, coincidentally, by Mandalorian creator Jon Favreau). Pre Vizsla was a terrorist who often fought with the Jedi.

However, Pre Vizsla’s ancestor, Tarre Vizsla, was the first Mandalorian to become a Jedi. Tarre Vizsla created the black lightsaber during the rule of the Old Republic (before the prequels). Unlike most lightsabers, the blade of the Darksaber is angled and looks more like a sword. The size and intensity of the blade can, according to lore, change based on the user’s emotions.

The Darksaber became an important symbol among the Mandalore. Whoever held it became the leader of Clan Vizsla, one of the largest clans on the Mandalorian planet. The only way a person could become the master of the Darksaber was to defeat its previous owner.

Pre Vizsla and his clan helped save Darth Maul (the villain from Phantom Menace, who was an apprentice to Palpatine) after Obi-Wan Kenobi cut the Sith Lord in two at the end of that movie. (Maul survived using the Force.) Unfortunately for Pre Vizsla, Maul coveted the Darksaber and eventually the two dueled. Maul won the Darksaber from Pre Vizsla, and the Mandalorians became divided over whether to follow Darth Maul, a non-Mandalore, or a Mandalore leader instead. Civil War broke out on the planet.

Darth Maul later challenged his old master Palpatine (a.k.a. Darth Sidious) and Palpatine’s new apprentice General Grievous. Maul lost but did not die. He went on to become a crime lord (as seen in Solo). But in that movie, he uses his red, double-bladed saber (as seen in Phantom Menace). So it’s unclear what happened to the Darksaber between Maul’s battle with Palpatine and the rise of the Empire.

In a 2013 episode of the animated series Rebels, a Mandalorian weapons expert named Sabine Wren found the saber on Dothamir, the planet where Maul’s crime syndicate was based, after the Empire took control of the galaxy. She trained to use the Saber under Jedi trainee Kanan Jarus. (Another spoiler alert for The Rise of Skywalker: Kanan Jarus’ voice — more specifically Freddie Prinze Jr.’s voice — is among those that Rey hears during the final battle of that movie, along with Luke’s, Leia’s, Obi-Wan’s, Anakin’s, Mace Windu’s, Quin-Gon Jinn’s, Yoda’s and others.)

Sabine Wren went on to use the Darksaber to fight Imperial soldiers on Mandalore when they tried to wipe out the Mandalorian race. Sabine Wren gave the saber to Bo-Katan Kryze, who by virtue of holding the weapon became the new ruler of the Mandalorians. She is the last known owner of the saber before Moff Gideon appears with it in the show. That means the saber’s whereabouts are unaccounted for during the run of the original trilogy, when the rebels fought against and defeated the Empire.

Moff Gideon’s unlikely survival at the end of The Mandalorian suggests that he will be the big bad in the second season of the series. We’ll likely see the darksaber again and, hopefully, find out how he acquired it. Gideon seems to be obsessed with Mandalorian culture: He played a major role in the Purge on Mandalore and even went so far as to discover the true names of the foundlings — or orphans — who were rescued and trained by the Mandalorians, including Din Djarin (Pedro Pascal), whose name we hear for the first time in this episode.

But if Din Djarin manages to somehow acquire the darksaber, that could make him the leader of the remaining Mandalorians. Perhaps that’s where this series is ultimately headed when it returns for a second season in fall of 2020. 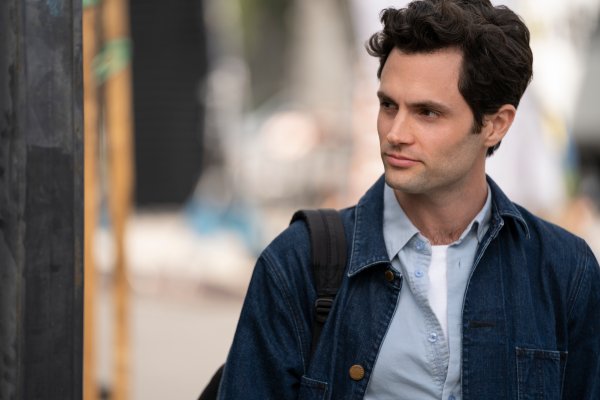 Penn Badgley Wants Viewers of You Season 2 to Keep Questioning the Appeal of His Charming Stalker Joe
Next Up: Editor's Pick