For Nadia Whittome, the evening of Dec. 11 passed in a blur — not because of frantic last-minute campaigning for the U.K. election the following day, but because she was in hospital being treated for the flu.

When the results came through some 24 hours later, Whittome found out that, aged just 23, she had been elected as the U.K.’s youngest sitting lawmaker. She gave her victory speech in the early hours of Dec. 13 between bouts of vomiting. “It was really grim,” she says.

Now almost fully recovered, Whittome has had time to process her victory. Last week, she traveled to London from her home in Nottingham to take her seat in the House of Commons for the first time. At 23, she is less than half the age of an average member of parliament (MP) and, as the youngest sitting one, she finds herself surrounded by people whose political priorities are very different to her own.

Whittome is just the latest member of a new generation of elected representatives around the world who have grown up in an era of cuts to public services after the financial crash of 2007-8 — as well as an accelerating climate crisis. Similar in her progressive outlook to Alexandria Ocasio-Cortez in Congress and Sanna Marin, the new 34 year-old Prime Minister of Finland, Whittome’s politics have been shaped by her generation’s precarious status. “We grew up around people who have struggled to put food on the table,” she tells TIME. “People my age and younger have grown up with a very pressing worry of the climate crisis meaning we won’t have a planet to live on.”

Now, this daughter of working-class immigrants is getting ready to push her generation’s politics as an elected lawmaker for the opposition Labour Party. “We know that the crises we’re up against are huge in scale,” Whittome says, “and that the solutions to them need to be equally bold and implemented urgently.” She gives credit to the climate school strikers, led by Greta Thunberg, for waking some governments up to that fact. “It’s been down to them that world leaders have been forced to concede that we’re facing a climate emergency and drastic action needs to be taken.”

Whittome was born in the 1990s, at a historical juncture where the role of the welfare state in Britain was being pulled in two opposite directions. After the Second World War, there was political consensus that the state should be large, with a strong social safety net that could provide healthcare, housing and benefits for those in need. Even during the 1980s under Prime Minister Margaret Thatcher, who rolled back some welfare policies while preaching a free-market gospel, Britain’s welfare state kept its reputation as one of the world’s most generous. The first 13 years of Whittome’s life were spent under Labour governments, which spent heavily on social programs in a bid to reverse what they saw as the damage Thatcher had done. But in 2010, Labour was defeated and replaced by a Conservative Party-led coalition government, which argued that slashing public spending was the only way for Britain to reduce its budget deficit and recover from the 2008 financial crisis. “I know what it’s like to live under a Labour government and have opportunities bestowed on me, then suddenly I was plunged into this world of austerity,” Whittome says. Countries around the world also reduced public spending after the global crash, but the spending cuts that followed in Britain were some of the most severe in any developed economy — and resulted in slower recovery than other countries.

For Whittome, a woman of color who grew up in a single-parent household, the effect of those austerity policies was immediately visible. Whittome says it was a specific move, the so-called “bedroom tax,” that first led her to get into politics in 2012. In order to tackle an acute shortage of social housing, the Conservative coalition government introduced a policy that forced tenants who had a spare room in their public housing unit to accept a cut in their state benefits, in a bid to incentivize them to move into smaller accommodation. The “bedroom tax” hit many of the most vulnerable in society hardest — just 6% of people affected by the tax moved house, but 75% said they were forced to spend less on food. “It was seeing austerity measures impact my community, my friends, my family, my neighbors, which drove me to organize against the government,” Whittome says.

At the 2015 election, it appeared the Conservatives had won the debate on the welfare state when the opposition Labour Party argued that some welfare cuts were indeed necessary and pledged to not reverse some of them if elected. After Labour was defeated, its leader Ed Miliband stepped down, and a little-known lawmaker called Jeremy Corbyn stood to replace him. He was reviled by many Labour lawmakers for supporting policies like the nationalization of industry and higher taxes, which the party had moved away from in the 1990s. Though Corbyn was predicted to lose the internal party leadership contest, he won in September 2015, partly because Labour’s leader is elected by its members rather than its parliamentarians, and Corbyn had tapped into a grassroots desire for full-throated opposition to austerity. He was unexpectedly elected, and designed a radical policy platform pledging turbocharged state spending on infrastructure, welfare and health, while reversing the small-state reforms pursued by the Conservatives.

When Whittome learned Corbyn was running, she supported him “from the minute he announced his leadership bid.” She began leading campaigns in Nottingham against austerity, climate change and the government’s “hostile environment” policy toward immigrants, while holding down a job as a hate crime support worker. Suddenly, her leftwing pursuits were chiming with the messages coming from the party leadership. Whittome credits Corbyn with laying the conditions for her candidacy, though she wasn’t supported by Momentum, the grassroots Corbyn-backing campaign group. In late October 2019, she won an internal vote to be selected as Labour’s parliamentary candidate for the inner-city safe seat, Nottingham East. (Its former occupant, Chris Leslie, had quit the party in February in protest against Corbyn’s leadership.) Less than 24 hours later, a nationwide election was announced.

Whittome won easily on election night on Dec. 12, with 64.3% of the vote. Had her victory come at a different time, it would have been a resounding vote of confidence in the radical left wing of the party. But across the country, Corbyn led the Labour Party to its worst defeat since 1935, losing 59 seats in parliament. Its longtime opponent the Conservative Party, now led by Boris Johnson, secured a commanding majority. Corbyn announced he would stand down as leader in the new year. “It was a devastating set of results for us nationally,” Whittome says. She blames Brexit and Labour’s campaign strategy — not Corbyn or the party’s economic policies — for the defeat.

Others in the party disagree, and its future direction is now uncertain. The campaign to choose a new leader has not officially begun, but candidates are positioning themselves in earnest. A dividing line has already emerged between the left-wing faction Whittome is part of, and those who say the only way the party can win an election is to move closer to the center-ground by renouncing Corbyn’s big spending pledges.

Despite the grim outlook for the Labour Party and its outgoing leader, Whittome credits Corbyn with shifting the center-ground in British politics toward policies that are more friendly to young people, like ending austerity and pledging to decarbonize the economy. “Austerity was a political choice,” she says. “We’ve been saying that for the last decade.” That stance was “vindicated” by the Dec. 2019 election, Whittome says, “because the Labour Party, although we didn’t win, shifted the terms of debate on austerity.” During the election campaign, Johnson pledged an end to austerity, increasing public spending on health and police — though not as much as Whittome would like to see.

When it comes to the planet, Whittome is less optimistic. The Conservatives have pledged to decarbonize the British economy by 2050, which is 20 years later than Labour’s target. “Not only is that far too late, the date is imposed on us by the planet. It’s 2030,” Whittome says. “The question isn’t what year we’re going to decarbonize by, it’s what are we going to do to decarbonize by 2030.” In Parliament she says the climate emergency will be her top priority; she hopes to use her status as the youngest MP to pressurize the government to do more.

Whittome may be up against some major challenges, but she’s hopeful about the changes her generation will bring. People tend to assume that young people turn more conservative as they age. And it’s true that in the U.K. at least, the older you are, the more likely you are to vote for a right-wing party. But researchers say those assumptions might be mistaken when it comes to the deeply-held convictions on welfare and the climate held by Whittome and many of her peers. “There is plenty of evidence to suggest that people’s views on key values such as concerns over the climate emergency, support for investment in public services rather than privatization — those sorts of broader values do tend to remain with people,” says Matt Henn, a professor of social research at Nottingham Trent University and author of Youthquake, a book about young people’s impact on British politics.

“Young people now are more socially liberal than young people were in the past. Those values are not necessarily going to dissipate over time. These are fundamental values that, research suggests, broadly stay with people into later life.” 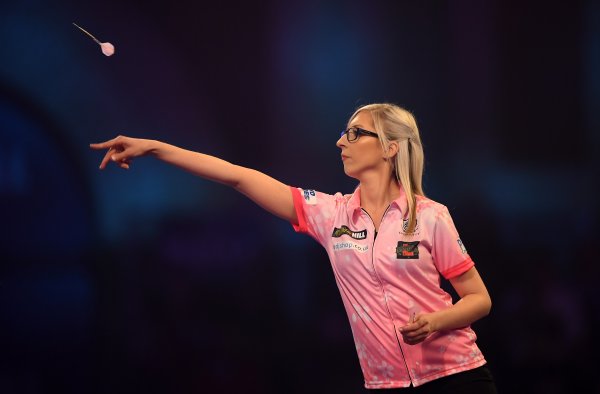 Woman Wins Mixed-Gender World Darts Championship Match For the First Time Ever
Next Up: Editor's Pick