Bill Cosby's Publicist Hits Back at Eddie Murphy After SNL Jab, Calls Him a 'Hollywood Slave'

In this past weekend’s highly anticipated episode, Murphy — who launched his career on the show, and hosted for the first time in 35 years — used his opening monologue to take aim at his fellow comedian, who was convicted on three counts of sexual assault in 2018 and has been accused of sexual misconduct by at least 60 women.

Murphy referenced Cosby’s downfall after telling the audience that he now has a year-old baby and nine other children, and that as a father-of-10 kids are now the focus of his life.

“If you told me 30 years ago that I’d be this boring stay-at-home house dad and Bill Cosby would be in jail, even I wouldn’t have took that bet,” Murphy said, breaking into a Cosby impression. “Who is America’s Dad now?”

On Sunday night, Wyatt responded to the jab with a lengthy post shared on Cosby’s official Instagram. The statement noted that Cosby had paved the way for the careers of Murphy and other black comedians who had taken the stage with him Saturday evening.

“It is sad that Mr. Murphy would take this glorious moment of returning to SNL and make disparaging remarks against Mr. Cosby,” the statement said. “One would think that Mr. Murphy was given his freedom to leave the plantation, so that he could make his own decisions; but he decided to sell himself back to being a Hollywood Slave. Stepin Fetchit plus cooning equals the destruction of Black Men in Hollywood.” Fetchit was a character made famous by actor Lincoln Perry, who is now considered by many to be America’s first African American film star for his portrayal of the lazy, shiftless “Stepin Fetchit” character, that viewed through a modern lens is considered by many to be painfully racist.

Wyatt said that he hoped Murphy and Cosby could have a “meeting of the minds conversation, in order to discuss how we can use our collective platforms to enhance Black people rather than bringing all of us down together.”

Murphy and Cosby have seemingly had a tense relationship for decades. In the 1980s, Cosby lectured Murphy for his comic use of profanity. This past summer, Murphy also told Jerry Seinfeld in an episode of the show Comedians in Cars Getting Coffee that he felt Cosby had unfairly targeted him earlier in his career, calling his behavior “mean” and noting that he had criticized Murphy for foul language. Murphy, who is known for doing imitations of Cosby, also did a pointed impression of the comedian while accepting the Mark Twain Prize in 2015. Murphy himself, has faced a sexual misconduct allegation. In 1989, an actress cast in his film sued him for sexual harassment and breach of contract.

Wyatt has fiercely — and colorfully — defended Cosby and other men accused of sexual assault over the past few years, comparing the way Cosby was treated to the persecution of Jesus Christ and saying that the comedian and then-Supreme Court nominee Brett Kavanaugh were victims of a “sex war.”

Cosby is the first high-profile conviction in the #MeToo era, and last year was sentenced to three to 10 years in prison for sexually assaulting former Temple University employee Andrea Constand in 2004. Although he was only sentenced in the Constand case, at least 60 women came forward with similar stories of sexual misconduct at the hands of the comedian who created a wholesome image as “America’s Dad” on The Cosby Show, which ran for eight seasons on NBC — the same network that airs Saturday Night Live.

Wyatt’s statement also comes less that two weeks after Cosby lost his appeal to overturn the conviction in Pennsylvania, and the appeals court upheld his classification as a sexually violent predator who faces lifetime supervision.

Montgomery County District Attorney Kevin Steele spoke out after the appeals court decision, and thanked Constand for coming forward with her story, which many credit with helping many other victims find the courage to share their own stories of sexual abuse.

“She came to law enforcement almost 15 years ago seeking justice for what was done to her,” he said. “The world is forever changed because of Andrea’s bravery.” 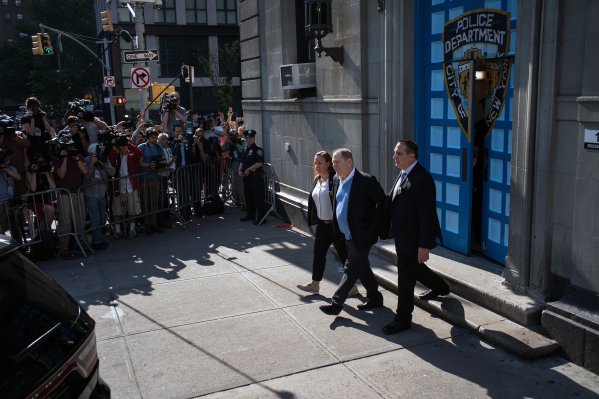 Harvey Weinstein's Arrest Is Just the Opening Scene
Next Up: Editor's Pick