The True Story Behind the Movie The Two Popes

At the world’s oldest institutions, change is never something to be taken lightly. And nowhere is that more true than in the Roman Catholic Church, one of the oldest institutions in the world, where in recent decades the priestly leadership has faced a now-familiar debate: whether, in changing times, to adapt to new expectations or hold fast to the old ways.

That debate is at the center of The Two Popes, a new film from writer Anthony McCarten (Darkest Hour, Bohemian Rhapsody) and director Fernando Meirelles (City of God), now streaming on Netflix. Inspired by true events, the movie centers around Cardinal Jorge Bergoglio (Jonathan Pryce), the soon-to-be elected Pope Francis, and the aging Pope Benedict XVI (Anthony Hopkins). Their ideological and temperamental differences, and the theological debates that spring from them, drive the movie’s action as the leaders spar over the future of 21st-century organized religion. And though much of the movie is fictional, those very real debates have consequences far beyond the cloistered enclave of the Vatican, with the Church’s determinations on issues like celibacy among priests and the role of women in the Church having ramifications for the lives of the world’s more than one billion Catholics.

Here’s the true story behind The Two Popes.

What’s the background of the real Pope Francis?

Pope Francis, formerly the archbishop of Buenos Aires, Jorge Mario Bergoglio, is portrayed in The Two Popes as a strong-willed progressive, a man more comfortable giving open-air sermons and working on projects for the poor than participating in the Vatican’s solemn rituals. The depiction may not be far off, although, as the movie suggests, to simplify Bergoglio as a religious leader would be a mistake.

As a Jesuit priest in Argentina, Bergoglio made rapid progress through the ranks of the Catholic order. In 1973, he became head of all Jesuits in the country and neighboring Uruguay at only 36. But during his tenure, the young priest came to lose favor within the group. As a prominent religious leader, he faced accusations of complicity in Argentina’s “Dirty War” that took place between 1976 and 1983, a campaign of extrajudicial killings carried out by the country’s military dictatorship, including claims that he failed to defend two priests kidnapped by the regime, which he denies. Speaking in his first interview as pope, Bergoglio said that, during his leadership, his “authoritarian and quick manner of making decisions led me to have serious problems and to be accused of being ultra-conservative,” according to the Atlantic.

In 1990, Bergoglio was stripped of his leadership responsibilities and sent to Córdoba in central Argentina, where he spent two years in what he later described as “a time of great interior crisis.” When he returned, it was as a changed leader, with a new perspective gleaned from his interactions with that city’s poor. And as Bergoglio again rose within Argentinian Catholic leadership, he embraced many more liberal attitudes on the Church’s role in combating poverty and inequality, attitudes he would take with him to the Vatican.

What is the true story of Pope Benedict XVI?

Pope Benedict XVI, born Joseph Ratzinger, who served as head of the Catholic Church from 2005 to 2013, is shown in The Two Popes as a rigid, uncompromising leader who saw a return to principles as the best course for a church struggling with 21st-century problems. Like Pryce’s depiction of Francis, that characterization isn’t off the mark.

Born in Germany in 1927, Ratzinger was a child when the Nazis seized power in 1933. At 14, he was made to join the Hitler Youth, though his family had been opposed to the fascist regime, before he was drafted into the German military a few years later. Ratzinger was a Catholic academic for decades, teaching dogma and theology, writing theological tracts and serving as an expert assistant at the Second Vatican Council in the mid-1960s. And though he was known as a progressive for years, he became more conservative as he aged. In 1977, Ratzinger became archbishop of Munich and Freising, and in 1981, he was made the Vatican’s theological watchdog under Pope John Paul II, where he served for more than two decades and became known for his strict attitudes as well as his intelligence.

His leadership was tested by the accusations of child sexual abuse lodged against the Church during his tenure as pope. He spoke out against the misconduct repeatedly, ordered investigations, and issued new rules in 2010 to make it easier to discipline predatory priests. But his relative unwillingness to hold the larger Catholic hierarchy to account caused many to believe that he had not gone far enough to root out the menace. And in 2013, Pope Benedict XVI announced his resignation, citing age and failing health, becoming the first pope to step down since the 15th century.

What were the conversations between the two popes?

In The Two Popes, Bergoglio and Benedict XVI meet under unprecedented circumstances, with Bergoglio traveling to Rome in order to request permission to retire, only to be rebuffed by the pontiff who subsequently tells him of his own plans to step down. As that drama plays out, the film offers a fascinating window into the debates between two ideologically opposed religious leaders. As for the literal veracity of those conversations and the situation that created them, the truth is that they’re mostly imagined. Bergoglio’s letters of resignation are based on fact, but his subsequent visit with the pope is fictional, as are the conversations between the two. “There’s different levels of presumption when you embark on these things,” screenwriter Anthony McCarten told the Wrap. “Because no one’s privy to these intimate conversations, this movie is probably more risk-taking than previous ones in that we don’t know really what happened.”

Instead of literal transcriptions, the film’s conversations between Benedict XVI and Francis are based on their stated positions from speeches and writings. They are a kind of conjecture on the part of the filmmakers, a plausible debate to fill a historical gap. “What you always do is you speculate,” McCarten told the Wrap. “Hopefully that speculation is based in facts and the truth, and hopefully it’s inspired.”

What is the current relationship between Francis and Benedict?

Jonathan Pryce and Anthony Hopkins in 'The Two Popes'
Netflix

The Two Popes ends on a buddy-comedy note, with Francis and Benedict XVI eating pizza as they watch the World Cup, as the former has tried to convince the latter of the pleasures of watching the sport. The real-life relationship between the popes hasn’t been quite so smooth. In April, Benedict XVI, now 92, released a 6,000-word letter that blamed the child sexual abuse crisis on liberal theological ideas within the church and a sexually permissive culture in western countries, a move that was not only controversial as the church continues to grapple with the crisis, but also seemed to violate the former pope’s own stated policy to stay out of Francis’s way.

Still, the letter may not have been meant as an attack. While its message appeared to feed into the years-long battle between Church reformers and conservatives, Benedict XVI appeared to hope that the long note would be helpful for his now 83-year-old successor. “I had to ask myself,” he wrote, according to the New York Times, “even though, as emeritus, I am no longer directly responsible—what I could contribute to a new beginning.”

As for the final scene of the popes watching soccer together, the incident was more one of narrative convenience than real history. “It seems Pope Benedict doesn’t like [soccer]; he likes Formula 1,” Meirelles told USA Today. “It would have been a good opportunity, but we really made this up.” 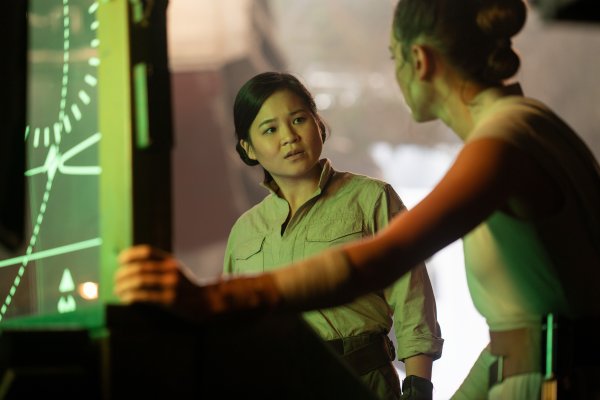 Why It's Problematic That Star Wars: The Rise of Skywalker Retcons the Plot of The Last Jedi
Next Up: Editor's Pick