Getty Image/iStockphoto
Ideas
By Amanda Jaret and Sandeep Vaheesan
Jaret is assistant general counsel for the United Food and Commercial Workers. Vaheesan is legal director at the Open Markets Institute.

Through non-compete clauses, employers have robbed tens of millions of workers of the right to practice their trade where they want. Non-competes can bar workers from accepting new employment in their field or industry for a year or more after they leave. Policymakers are now engaged in a largely unacknowledged debate over how to regulate non-competes. Federal and state legislators are deciding whether the right to leave should be universal or granted to only some workers. Should all workers have the freedom to find and take new work when and where they want, or should this right be conditional on income or occupation?

Earlier this fall, Democrat Chris Murphy and Republican Todd Young introduced the Workforce Mobility Act in the Senate, which would ban non-competes for all workers across America. Other lawmakers have pursued more targeted solutions. For instance, in 2019, legislators in Maryland, Maine, and New Hampshire passed bills prohibiting non-competes for low-wage workers. The city council in Washington, D.C. has proposed outlawing non-competes for workers making up to $87,654. In 2018, Colorado was even more “surgical” and limited non-competes for physicians treating rare disorders.

A universal national solution is necessary. The freedom to exit should be a basic right, not a privilege for a subset of workers. Even if Congress does not pass the Workforce Mobility Act of Senators Murphy and Young, the next president, acting through the Federal Trade Commission (FTC), can ban non-competes and restore all workers’ freedom to practice their trade. Nineteen state attorneys general endorsed FTC action as “offer[ing] the quickest, most comprehensive regulatory path to protecting all workers from these exploitative contracts.”

Somewhere between 36 million and 60 million workers are bound by non-compete clauses today. Hardly any profession is free from them. Home health workers in Oregon have been forced to accept them and threatened with dismissal for wanting to take additional work in violation of their non-competes. In Washington, D.C., Compass Coffee, a popular chain, has made accepting non-competes a condition of employment for baristas, coffee roasters, and managers. Amazon required warehouse workers to sign potentially global non-competes until this practice was publicized in a 2015 report.

Employers also use non-compete clauses to restrict the movement of workers in the arts and media. Non-competes compound the precarity of these traditionally middle-income workers’ jobs. For example, the organizer of the music festival Coachella prohibits artists from performing at any other festival in North America or any venue in Southern California between December 15th and May 1st. Not only do non-competes interfere with these workers’ freedom to pursue their trades, they also hinder artistic collaboration and impede the flow of information.

One widely publicized case involved the legal news site Law 360, which required its reporters to accept non-competes that restricted their ability to find work with other digital news outlets. Law 360 threatened to enforce the non-compete against a reporter who had left to accept a position with the Reuters legal news team, and she was terminated soon after by Reuters. After the New York State Attorney General filed suit, Law 360 stopped requiring reporters to sign non-competes. (On a positive note: This incident sparked a successful union organizing campaign among the Law 360 reporters, who were aware that journalists with union contracts were not required to sign non-competes.)

Non-competes bind workers near the top of the income distribution too. Approximately 45% of primary care physicians are subject to non-compete clauses. Doctors are increasingly employed by hospitals and insurers (instead of running their own practice) and may have little power to resist non-competes, due to student debt burdens and other financial constraints. And in metropolitan areas, counties, and states with a dominant hospital network, physicians can face the choice of accepting a non-compete or not working at all.

Non-competes in medicine can abruptly sever long-term physician-patient relationships and put patient health at risk. In one extreme case, the enforcement of a non-compete against a colorectal surgeon in a Midwestern community meant that a single colorectal surgeon had to serve a population of 700,000. Due to this specialized surgeon shortage, patients with colorectal cancer, rectal bleeding, and other serious ailments had to delay lifesaving procedures.

Employers generally don’t enforce non-compete restrictions in court—and don’t need to. Simply imposing a non-compete discourages workers from looking for new work and switching jobs. Even for well-paid professionals with access to legal services, the mere threat of employer enforcement, backed by rare follow through, is often enough to bind them to their current jobs.

Importantly, many employers ask job applicants whether they are bound by a non-compete and use the existence of a non-compete as a screen when reviewing applications. For employers, why run even a slight risk of litigation with a new hire’s former employer when job seekers are plentiful?

Employers’ arguments for imposing non-competes on certain workers should be treated with skepticism. In a fair labor market, firms afraid of losing workers have a simple way of retaining them: raise salaries, improve benefits, and offer promotions. They can also use employment contracts that commit both parties to the employment relationship for a fixed period. Think of guaranteed contracts in professional sports. In addition, employers have other legal tools, including copyright, patent, and trade secret law, to protect the valuable business information and job training they purportedly provide to workers.

The Federal Trade Commission already has the authority to ban non-competes for all workers. In March, our organizations, as well as 18 other labor and public interest groups and 46 advocates and scholars, petitioned the FTC to use its rulemaking power to free workers from non-compete clauses. The current chairman of the Republican-majority FTC, Joseph Simons, has expressed interest in the issue but taken no concrete steps toward initiating a rulemaking. Both Democratic members of the FTC—Rohit Chopra and Rebecca Kelly Slaughter—have endorsed a rulemaking on non-competes, suggesting a third Democrat appointed (to the five-person Commission) by President Biden, Sanders, or Warren could make an FTC rule a reality.

Employers in a wide range of industries have deprived workers of the basic freedom to leave their jobs to pursue their trades elsewhere. In an economy with low union density and persistent unemployment or underemployment, threatening to leave is often the only way millions of workers can obtain decent wages or fair treatment. But for workers subject to a non-compete, speaking up about pay or other conditions of employment can mean not only losing their current job, but also risking their entire livelihood. The freedom to leave should be universal, not available only to some.

Most Popular on TIME
1
All the Marvel Clues You Missed in WandaVision's First Two Episodes
2
Why Is America So Divided Today?
3
Read Donald Trump's Full Inauguration Speech 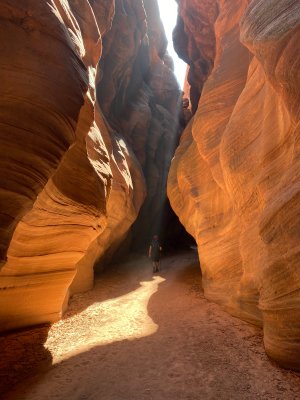