(Bloomberg) — Macau has long provided Chinese leaders with a glimmering showcase for the virtues of obeying Beijing.

The former Portuguese colony has marched on to become the world’s largest gambling hub over the past few decades, surpassing its more rebellious brother Hong Kong along the way. President Xi Jinping is expected to use a visit marking 20 years of Chinese rule over Macau this week to send a message to the protest-stricken financial hub some 50 kilometers (30 miles) to the east: work with us and get rich.

“Jobs are chasing after Macau people, instead of the other way around,” said Alexandra, a 29-year-old human resources worker in Macau, who asked to be identified only by her first name because she wasn’t authorized to speak publicly about her work. “Young people can see a much brighter future here than in Hong Kong. They are indifferent, or even cold toward politics.”

Xi arrived at Macau International Airport aboard an Air China 747 on Wednesday afternoon and shook hands with local officials on the tarmac. In brief remarks, he praised Macau’s “earnest implementation” of the “one country, two systems” framework that governs it, as well as Hong Kong.

“The achievements and progress Macau has made in the past two decades since its return to the motherland are a source of pride,” Xi said. “The beautiful blueprint for Macau’s future development needs our joint efforts.”

During the visit, Xi will attend a banquet and cultural performance before delivering a speech on Friday to commemorate the city’s return. He’ll likely highlight a raft of recent policies intended to help diversify Macau’s tourism industry while — in a possible signal to Hong Kong — establishing a yuan-denominated financial market there.

While Hong Kong and Macau share the Cantonese language, a common past as European trading outposts and a similar promise of autonomy from Beijing, they couldn’t look more different to the Communist Party. Today, the enclave of 670,000 people ranks as the world’s second-richest territory in terms of per capita economic output, after Luxembourg, according to data compiled by the World Bank. By that measure, it’s almost 80% wealthier than Hong Kong.

Macau has suffered little of the unrest that has gripped Hong Kong since the latter attempted to pass legislation earlier this year allowing extraditions to mainland China. Unlike Hong Kong, the government passed a Beijing-mandated national security law a decade ago, and hasn’t seen mass protests since the government withdrew legislation fattening the retirement packages for top officials in 2014.

“While Hong Kong people can be mobilized by fighting for abstract value as democracy and freedom, Macau is ‘interest-oriented,’” said Ieong Meng U, an assistant professor at the University of Macau’s Department of Government and Public Administration. “Only very few government policies can trigger widespread social grievances.”

Much of Macau’s stability can be traced to its monopoly over casino gambling in China, an industry that accounts for 80% of the government’s total revenue and supports a roughly $1,000 annual handouts for residents. How long that will last is unclear, as slowing Chinese growth and increased overseas competition cut into the returns of operators including Las Vegas Sands Corp., MGM Resorts International and Wynn Resorts Ltd.

Still, Macau’s success would seem to bolster Communist Party arguments that Hong Kong’s problems stem from its yawning wealth gap and outdated national security laws. Macau has been effectively under Beijing’s control since left-wing protesters — and a few Chinese warships — forced its Portuguese governor to sign an apology for his policies under a portrait of Mao Zedong.

Macau’s charter broadly resembles Hong Kong’s, but lacks key provisions such as the goal of selecting the city’s leader “by universal suffrage.” Incoming Macau Chief Executive Ho Iat-seng, who Xi will swear in Friday, was chosen by 98% of the votes cast by a 400-member election committee.

To prevent any of Hong Kong’s protests from spilling over, authorities have tightened immigration checks into Macau ahead of the president’s visit, with the head of the local American Chamber of Commerce branch among those denied entry.

During a similar anniversary visit to Hong Kong two years ago, Xi urged the city to profit from China, not defy it. Growth held “the golden key to resolving various issues in Hong Kong,” the president said at the time.

“The messaging is clear to Hong Kong and the rest of the world, but primarily to Hong Kong — there is a way out, there is an easy and good way out, and it’s called Macau,” said Steve Tsang, director of the University of London’s SOAS China Institute and author of “A Modern History of Hong Kong.”. “But what they completely and utterly fail to see, is that if Macau is the future, most people in Hong Kong will say, thank you very much, you can keep it for yourself.”

The message still carries well in Macau, where rent, restaurants and groceries are all cheaper, according to cost-of-living data from Numbeo. In Hong Kong, an influx of mainland Chinese have gobbled up university slots, driven an expansion of luxury shopping and helped make it the world’s least-affordable housing market for nine straight years.

Although Macau is much smaller — roughly half the size of Manhattan — its residents have been largely insulated from such pressures by policies that make jobs and passports harder to come by for mainlanders or foreigners.

“Hong Kong has long been a metropolitan center, but Macau was just a little city prior to opening up the gaming licenses,” said Simon Sio, chairman of the real estate-and-investment firm Lek Hang Group. “Macanese don’t have enough confidence in ourselves, as we have fewer opportunities in the world compared to Hong Kong. Macau benefits from the motherland a lot. We residents know this well.”

Still, not everyone is satisfied with the local government, as the 2014 protests against retirement perks suggest. Gambling’s dominant role in the economy has also prompted criticism, due in part to the criminal activity it has fostered, from loan-sharking and money-laundering to triad fights and prostitution.

Enough conversations with participants in Hong Kong’s protests will turn up demonstrators from neighboring Macau. That points to a possible source of long-term concern for the Communist Party as casino growth slows.

“In my opinion, the economy of Macau is actually not so stable because the income from the gambling industry has gradually declined since the protests in Hong Kong started,” said Christine, a 21-year-old Macau resident who has participated in Hong Kong protests and wanted to be identified only by first name to reduce the risk of reprisal. “The Communist Party wants to grab out all the money in Macau to maintain their regime.” 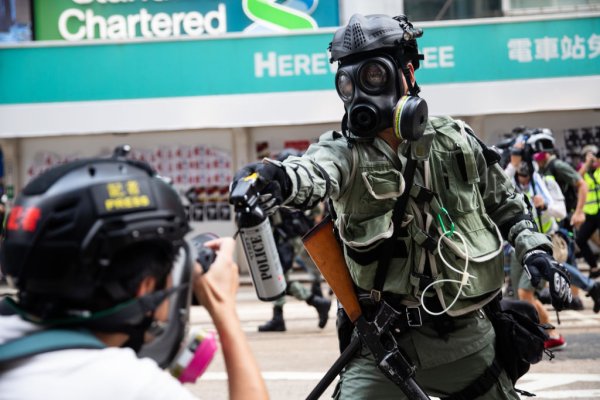 China Is Threatening Media Freedom in Hong Kong and Taiwan: Report
Next Up: Editor's Pick