'I Own the Narrative.' How Ashley Graham Is Using Her Podcast to Put Herself on the Line

It feels like Ashley Graham‘s influence is ubiquitous right now. The 32-year-old TIME 100 2017 honoree, model and body activist’s confidence seems to be apparent in all that she touches. There she is, gazing winsomely at you from the January 2020 cover of Vogue, as she cradles her pregnant belly in a gold Oscar de la Renta caftan. You’ve probably seen her visage on billboards or commercials for Revlon, for whom she is an ambassador, or you might have caught her web series Fearless with Ashley Graham with Ellen DeGeneres, where she cheers on guests each season to take chances to live life on their terms.

However, Graham’s upbeat personality might be the most dynamically felt with her podcast, Pretty Big Deal. Now in its second season and expanding to be a weekly podcast, it gives her audience the chance to listen in on frank conversations with Graham’s powerhouse guest list, which has included the likes of Kim Kardashian West (who was the podcast’s very first guest,) Gayle King, Serena Williams, and Gabrielle Union. For Graham, starting a podcast was a way to bring the radical inclusivity that she advocates for in her fashion work, like refusing to have her photos retouched and creating clothing for all body types, to a broader audience.

“I started the podcast because I’ve always been interested in learning other people’s backgrounds and cultures and point of views since I was a child,” she tells TIME. “It was really important for me to have my story told and have a platform and I just want other people’s stories to be told as well.”

The podcast format proved to be an excellent fit for Graham’s unfiltered and exuberant presence, giving the podcast the feel of an intimate chat with a friend. Guests often discuss the inner workings of their lives, whether it’s the deluge of feelings that come when clothes don’t fit or the challenges of figuring out how to breastfeed for the first time. This element was something that was extremely important for Graham, who is adamant about being authentically herself without compromise, whether she’s working on a fashion shoot or doing an interview for Pretty Big Deal.

“It’s important to me to show up to the job the way I am as a person; I don’t have a persona, I don’t change who I am and I want people to feel comfortable,” she said. “ I’m doing the interviewing. I’m not even a trained journalist, I’m just a girl who is about the people. I ask the questions that you at home want to know, I ask the questions that are to the point.”

On her podcast, Graham offers her guests is the chance to be able to connect with someone who, despite being a public figure, is still determined to live life without artifice or pretense. Graham’s had her fair share of being interviewed, which informs the way that she wanted to talk to her guests, ensuring that it was comfortable and sans judgment.

“I put myself on the line, I talk about felling insecure about my body and my ups and downs with food and men, family, it runs the gamut and I think that people know when they’re coming down and sitting on my couch, it’s about truth and honesty,” she said.

Podcasting has also given Graham more space and the freedom to empower people to use their agency and tap into their own confidence, which has always been at the center of her work, even from when she began working as a model over two decades ago.

“I think modeling gave me a platform in general and I think now more than ever, models have the opportunity to talk about things that are important to them, social issues,” she said. “We have a platform now where we should be using it to change people’s lives, to give information to people in whatever capacity that is for you. With this podcast, I have full control. I own the narrative, and I think that there’s something incredibly liberating about that. When it comes to fashion, I’m literally giving up my body and face to a company or to a magazine, who could edit me and in Pretty Big Deal, I’m unedited.”

And even though Graham will be expecting her first child, a son, in January, she wants her listeners to know that the podcast will still be going happening while she’s on maternity leave and that she’s always on the lookout for new guests, many of whom she sources directly from her fans.

“I ask my fans, ‘Who do you want me to talk to? Who’s interesting to you?’ And they’ve given me a great roster,” she said. “Some of them I’m still trying to get, like Will Smith and The Rock — holla at ya girl! And Michelle Obama and Oprah! I ask my fans who they want me to talk to. The people who I’m talking to, I’m genuinely excited about and interested in, they’re game changers.”

With her work in fashion and now her podcast, it sounds like Graham is changing the game herself, by opening the conversation up. 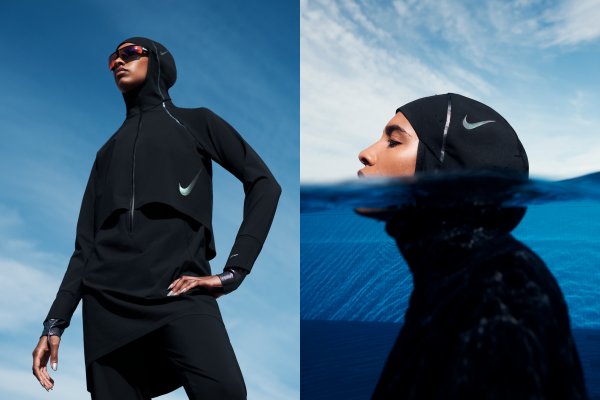 Nike Launches New Swimwear For Women Who Wear A Hijab
Next Up: Editor's Pick