To say that 2019 has been a busy year for Robyn Rihanna Fenty would be an understatement. This year, the singer-turned-mogul launched a fashion line, Fenty Maison, with storied luxury giant LVMH—becoming the first woman to create an original brand for them and the first woman of color to front one of their fashion houses. She expanded her Fenty Beauty empire; starred in the film Guava Island alongside Donald Glover; hosted an inclusive fashion show for her Savage x Fenty lingerie line which she streamed for all her fans; and released a 15-lb. behemoth of a photo book titled The Rihanna Book, which she dubbed a “visual autobiography.”

However, despite all that Rihanna’s blessed her fans with this year, there are many in the Navy (Rihanna’s loyal and hyper-vigilant fan base) who refuse to be distracted from the fact that Ri has not released new music, despite confirming on social media in early 2019 that a new album was forthcoming. It’s been nearly four years since Rihanna released her eighth and most recent studio album, Anti, and many fans are hungry for a new project. This fact is not lost on Rihanna, who periodically trolls the Navy about their persistent pursuit of her ninth album, or as she dubbed it in an Instagram post, R9.

While you wait for Rihanna to drop her next album, here’s a review of everything we know so far about R9.

While there’s no specific date confirmed for the release of Rihanna’s new album, the singer responded to a fan’s Instagram comment on one of her posts in 2018, writing that the album would be dropping in 2019. The singer fanned the flames of this rumor when she posted a video on social media of herself at work in the studio. While there are only couple of weeks left in 2019, there’s still hope that Rihanna could release one more album before this decade is out.

However, Rihanna has also made it clear that she won’t be releasing the music until she feels it’s ready. In an interview with Sarah Paulson for Interview in June, Ri confirmed that the album was underway and that it’s “really fun,” but that she will not be rushed.

“It really does suck that it can’t just come out, because I’m working on a really fun one right now,” she said. “I’m really happy with a lot of the material we have so far, but I am not going to put it out until it’s complete. It makes no sense to rush it, but I want it out. I’ve gotten to the point where I’m like, ‘Even if I don’t have the time to shoot videos, I’m going to put an album out.’”

R9 is what Rihanna and fans are calling her upcoming album. The term is a reference to the fact that the project will be her ninth studio album. Rihanna referred to the new music as R9 in an Instagram post in October 2018, where she joked about her fans’ dedication to getting new music. In the humorous post, she used a picture of her with eager fans at a Fenty Beauty launch overlaid with a meme-like graphic with text that read: “When your fans keep asking you for new music.” In the caption to the post, she called the pressures she faced over the new album, the “R9 chronicles.”

What is Rihanna’s new album about?

Rihanna confirmed to Vogue in October 2019 that her new album is “reggae-inspired or reggae-infused,” noting that it’s “not gonna be typical of what you know as reggae, but you’re going to feel the elements in all of the tracks.”

Elaborating on why she chose this direction for her new album, Rihanna, who hails from Barbados, declared that the genre was an important part of her becoming who she is.

“Reggae always feels right to me,” she said. “It’s in my blood. It doesn’t matter how far or long removed I am from that culture, or my environment that I grew up in; it never leaves. It’s always the same high. Even though I’ve explored other genres of music, it was time to go back to something that I haven’t really homed in on completely for a body of work.”

Who are Rihanna’s collaborators for R9?

Rihanna has had many notable collaborators over the years, including SZA, Jay Z, and perhaps most notoriously, Drake, with whom it was rumored she shared a romantic interlude. For R9, it appears that Rihanna will be working with collaborators both old and new.

In an interview with Hollywood Life, longtime collaborator producer The-Dream, who helped make Ri’s mega-hit “Umbrella,” confirmed that he was “definitely” working on the new album, although he wasn’t sure when the music would be coming out. As for new collaborators, Vogue revealed in its interview with Rihanna that she has a collaboration with “Old Town Road” wunderkind Lil Nas X coming up, but that it might not be music; rapper Haiti Babii, an artist endorsed by Rihanna herself, revealed in an interview with BET that in a FaceTime conversation with Rihanna in May 2019, she said the up-and-coming reggae artist Koffee is one of her writers. While this doesn’t necessarily mean that Koffee is writing for R9, it would be a fitting choice given that Rihanna’s new album is reggae-inspired.

What we do know is that one former collaborator definitely will not be appearing on R9—and that’s none other than Aubrey Drake Graham. While Drake and Rihanna have collaborated on many songs for both of their respective albums in the past, the singer shared in a candid interview with playwright Jeremy O. Harris in T Magazine that she would not be collaborating with Drizzy “anytime soon.”

Rihanna’s final word on the matter

While Rihanna’s engaged in some good old-fashioned trolling of her fans’ fervent desire for a new album (look no further than the T-shirts that she released for Fenty that boldly proclaims “NO NEW MUSIC”), she’s also been clear about setting boundaries for some healthy work-life balance. In a recent Instagram post, Ri revealed that the past year has been “an overwhelming one” and that she’s currently working on balance.

While Rihanna still hasn’t dropped the new album, the Navy was blessed with new music on March 27, when Rihanna’s collaboration with Party Next Door, “Believe It” for his new album.

In other news, it appears that longtime Rihanna stan Aubrey Drake Graham would also like Rihanna to drop her own music — and may be in his feelings about her again. 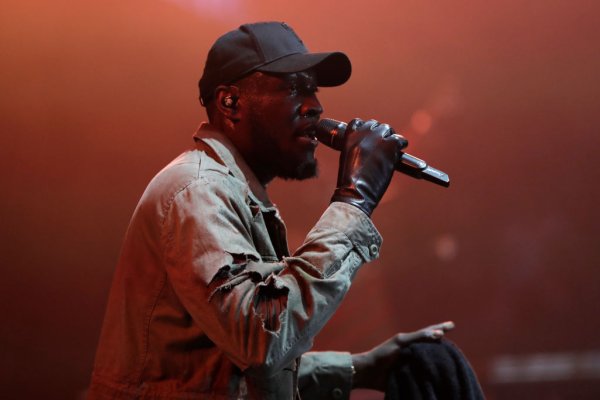 The 5 Best Songs of the Week, from Stormzy to Kaytranada
Next Up: Editor's Pick