How the Royal Family Celebrated Christmas 2019

Members of the royal family celebrated Christmas on Wednesday from Queen Elizabeth II’s Sandringham Estate in Norfolk, a couple hours northeast of her London residence.

Princess Charlotte seemed to have a blast with her first Christmas stroll as she said hello to the hundreds of well-wishers who came to greet the royal family.

Prince Harry, Duke of Sussex and Meghan, Duchess of Sussex, were notably absent from Wednesday’s festivities; they chose to spend the holiday privately with Meghan’s mother, Doria Ragland.

What happened at the event?

Prince William and Kate Middleton smiled and waved at onlookers as they walked to church. They were among the many family members present for the Christmas morning service at St. Mary Magdalene church, as is customary for Christmases spent in Norfolk.

Even Queen Elizabeth’s great-great grandmother, Queen Victoria, visited St. Mary Magdalene, according to the family’s archives. The British royals have celebrated Christmas at Sandringham since 1988.

Prince George and Princess Charlotte arrived to the celebration in style

Prince George, 6, and Princess Charlotte, 4, participated in the family’s customary Christmas morning stroll for the first time this year, but 1-year-old Prince Louis stayed at home, according to the Associated Press.

Britain's Catherine, Duchess of Cambridge, center left, speaks with her daughter Princess Charlotte as she holds a pink flamingo while greeting the public outside the St Mary Magdalene Church in Sandringham in Norfolk, England, Wednesday, Dec. 25, 2019.
Jon Super—AP

The royal kids are no stranger to the limelight, and often steal the show whenever their parents take them anywhere. This year’s Christmas celebration was no exception. (Even though no candy cane pictures went viral this year.)

Princess Charlotte received a Christmas gift from one well-wisher on the walk, leaving with a pink balloon flamingo.

Though Prince Harry and Meghan spent the last two Christmases with the royal family at Sandringham, the new parents chose to celebrate privately with their son, Archie Harrison Mountbatten-Windsor, and Meghan’s mother. In a November statement, the couple said their decision was “in line with precedent set previously by other members of the Royal Family, and has the support of Her Majesty The Queen.”

The AP reports that the couple celebrated in Canada.

The announcement that the family would be absent from festivities on Dec. 25 lead to speculation in British tabloid headlines suggesting that skipping this year’s tradition might be a sign of discord or a slight. Some even called the move a “snub” of Queen Elizabeth II. Marlene Koenig, an author and expert on the British royal family, tells TIME that’s not the case.

“There’s no slight, it’s understood that Meghan had a baby this spring and [Ragland is] [Archie’s] grandma,” explains Koenig. Thanks to trans-Atlantic travel, it’s not out of the ordinary for a British royal to head to their non-royal spouse’s family for the holidays. But until the 20th century, it made sense that all royals would be together for Christmas. “In days of yore, before mass transit, if a foreign bride came, especially from another royal family, she didn’t see her family as often,” Koenig says.

Even Prince William and Kate Middleton have missed a number of Christmases with the royals since their 2011 wedding, opting to celebrate with the Middleton family instead.

Prince Harry and Meghan chose to partake in their own holiday gathering after the couple announced they were suing the media company Associated Newspapers, specifically for publishing a private letter from Meghan.

“Unfortunately, my wife has become one of the latest victims of a British tabloid press that wages campaigns against individuals with no thought to the consequences – a ruthless campaign that has escalated over the past year, throughout her pregnancy and while raising our newborn son,” Prince Harry said in an October press release.

Meghan elaborated in an ITV documentary. “Any woman, especially when they’re pregnant, you’re really vulnerable, and so that was made really challenging. And then when you have a newborn, you know. And especially as a woman, it’s a lot,” she said of the media attention.

Prince Andrew appears to skip after stepping down from public duties

Queen Elizabeth’s third child, Prince Andrew, appeared to miss the Christmas stroll on Wednesday, weeks after the Duke of York stepped down from public duties as he has become embroiled in the Jeffrey Epstein scandal. Instead, he went to an earlier service at church with his brother, Prince Charles.

“I continue to unequivocally regret my ill-judged association with Jeffrey Epstein,” Prince Andrew said in a Nov. 20 statement, announcing that the Queen permitted him to “step back from public duties” in the wake of the scandal. The Duke added that he was “willing to help any appropriate law enforcement agency with their investigations, if required,” and that Epstein’s apparent suicide in his jail cell in August “left many unanswered questions.”

Prince Andrew has been involved in this controversy for nearly a decade, previously stepping down from a post as a “special representative” for trade and investment in 2011, as people began to question his relationship with the American financier. The royal family never commented on the controversy until recently, when allegations that Prince Andrew had sexual relations with a 17-year-old girl resurfaced after Epstein was indicted for his crimes.

The prince has repeatedly denied these allegations.

What other notables did attend?

In addition to Prince William and Kate’s rambunctious kiddos, their grandfather, Prince Charles of Wales, was in attendance, as well as his wife, Camilla, Duchess of Cornwall.

Queen Elizabeth’s husband, Prince Philip, Duke of Edinburgh, 98, was absent from this year’s service. The Associated Press reports that he stayed home. Philip left a London hospital on Tuesday.

What do the royals do on Christmas?

The royal family does indeed have a Christmas tree, a custom that began with Queen Charlotte, before Queen Victoria and Prince Albert popularized the custom in the 19th century. Though royal fans won’t get to see Queen Elizabeth picking out an evergreen tree and dragging its dirt through the living room, she and her family members do like to put their own “final touches” on the tree, according to the royal family.

While most of the family stays at the Queen’s estate during the holiday, Prince William and Kate Middleton typically stay at Anmer Hall, their own residency in Norfolk, just a few minutes away.

Of course, gifts are a part of the royal family’s Christmas traditions, as members give each other presents on Christmas Eve.

The spirit of gift-giving is alive with the Queen, who also gives a tree to schools and churches near Sandringham every year. Queen Elizabeth also continues a tradition from her father, King George VI, by giving Christmas puddings to about 1,500 staffers from the palaces, the police and the post office. “Each pudding is accompanied by a greeting card from The Queen and The Duke of Edinburgh,” according to the royal family. 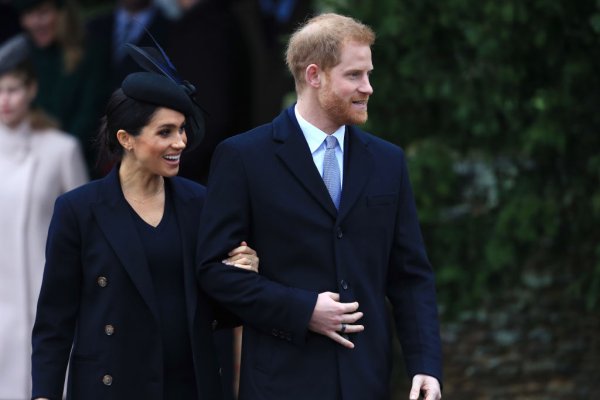 Why It's Not So Surprising That Meghan Markle and Prince Harry Won't Be at the Royal Family Christmas 2019 Celebration
Next Up: Editor's Pick