Ex-Secretary of Energy Rick Perry speaks to members of the media outside the White House in Washington, D.C. on Oct. 23, 2019.
Contributor—Bloomberg/Getty Images
By Simon Shuster / Kyiv

This summer, the Ukrainian government awarded the rights to develop a huge complex of oil and gas fields in the country to an American company that is co-owned by a former campaign donor to then-Energy Secretary Rick Perry. The decision annoyed the heads of the state-owned Naftogaz conglomerate, which had competed and lost the bidding for the contract. Now, Naftogaz has filed a lawsuit seeking to overturn the deal, two sources familiar with the matter tell TIME, casting a spotlight on Perry’s role in Ukraine’s oil and gas industry.

The suit was filed on Friday afternoon in the District Administrative Court of Kyiv, the sources tell TIME, and has not been previously reported. In a draft of the complaint obtained by TIME on Monday, Naftogaz alleges that the government of Ukraine acted illegally and with bias in July when it granted the oil and gas fields to an American company that is co-owned by Michael Bleyzer, one of Perry’s longtime allies and financial backers.

Bleyzer, a Ukrainian-born energy investor from Texas, insists that his company won the oil and gas exploration rights in Ukraine fairly and without any political influence. He says that the committee of government officials that made the decision was advised by outside experts who saw broader advantages in doing business with the U.S.

“The bid submitted by our company was judged as superior by the interagency committee as advised by a group of independent experts,” Bleyzer wrote in an email to TIME. “It was and is Ukraine’s goal to bring in much needed-foreign expertise and investment to find new fields, a goal advanced by this award.”

The Department of Energy (DOE) denied that Perry advocated for the business interests of any specific individual or company during his tenure as Energy Secretary, which ended this month. Rather, a department spokesperson said, Perry advanced the general interests of the U.S. energy sector. “Throughout his tenure at DOE, Secretary Perry championed the American energy industry all over the world,” Shaylyn Hynes, a spokesperson for the Department, said in a statement on Sunday. “[T]hroughout his engagements with Ukrainian officials Secretary Perry consistently called for the modernization and reform of Kyiv’s business and energy sector in an effort to create an environment that will incentivize Western companies to do business in Ukraine.”

Perry’s efforts to shape the energy sector in Ukraine have played out alongside the Trump Administration’s campaign of political pressure in the country. Starting this spring, Perry was part of a trio of senior U.S. officials—dubbed the “three amigos”—who took the reins of American policy in Ukraine. A whistle-blower’s complaint about Trump’s pressure campaign resulted this fall in an impeachment inquiry by Congress, which ended last week with the drafting of two articles of impeachment against the President.

Though Perry has played a relatively minor role in the impeachment saga so far, he was at the forefront of the parallel, and possibly intertwined, effort to influence the Ukrainian energy sector. During a meeting in May, Perry presented the President of Ukraine, Volodymyr Zelensky, with a list of Americans who could advise Zelensky’s government on energy policy. Among the people he suggested was Bleyzer, who has supported Perry’s political campaigns over the years, including with a reported $30,000 contribution to Perry’s campaign for governor of Texas in 2010.

At the time of Perry’s visit to Kyiv in May, Zelensky was seeking a meeting with Trump in hopes of bolstering Ukraine’s alliance with the U.S. against Russia, which invaded Ukraine in 2014 and continues to occupy parts of the country in Europe’s only active war.

The Associated Press reported in October that Perry’s proposal was part of an effort to install new leadership at Naftogaz. Some of the advisers Perry recommended were meant to join the company’s supervisory board, the AP reported. Bleyzer and the Department of Energy both denied pushing for changes to the board. In his email to TIME, Bleyzer wrote that Perry never suggested appointing him or anyone else to the board of Naftogaz. “For the record no one ever discussed this position with me, and I never would have considered it,” he wrote.

However, Bleyzer was advanced by the Department of Energy as a possible advisor to Ukraine on energy policy. “I participated in a couple of conversations with the DOE staff where they expressed an interest in creating an informal group that could help the DOE develop energy independence strategy for Ukraine. I would characterize these conversations as brainstorming in nature,” Bleyzer added. “Nothing ever came out of that idea.”

About two weeks after Perry proposed Bleyzer as an energy adviser to Ukraine, a company that Bleyzer co-founded, Ukrainian Energy, put in a bid for the rights to explore for oil and gas in a vast complex of fields known as Varvynska, the largest of nine energy licenses that the government put up for auction this year. Bleyzer’s only competitor for that field was a subsidiary of Naftogaz called UGV, whose bid appears to have been higher, at least in terms of the price it offered and the investments it promised to make, according to bidding documents reviewed by TIME. The Associated Press reported the apparent disparity in the bids last month.

“We know our offer was better,” Andriy Kobolyev, the CEO of Naftogaz, told TIME in an interview on Nov. 22.

Still, when the government decided the results of the tender on July 1, Bleyzer’s company won out, securing the exclusive rights to develop the complex of oil and gas fields for up to 50 years. “We are very annoyed with this,” Kobolyev, the Naftogaz CEO, told TIME last month. “Very annoyed, to say the least. And when we are annoyed, we usually do act, and we will.” Asked whether he intended to take legal action, Kobolyev answered, “Can’t comment.”

But lawyers for Naftogaz were then already at work preparing a lawsuit that seeks to overturn the results of the auction, according to the two sources with direct knowledge of the claim. UGV, the subsidiary of Naftogaz, is listed as the plaintiff in the lawsuit, according to the draft of the complaint. The document asks the court to nullify the government’s decision to award the fields to Bleyzer’s company, and to order the government to hold a new competition for the licenses to those fields. The defendants are listed as the Cabinet of Ministers of Ukraine, the Ministry of Energy and Coal Mining of Ukraine and the government commission that awarded the rights to the fields this year. Neither Perry nor Bleyzer is named in the draft complaint.

A member of the government commission that awarded the licenses, Roman Opimakh, told the AP last month that he saw no sign of American political influence in the commission’s decision. He said the commission wanted to attract American investments to the Ukrainian energy sector, and that aim was a factor in the decision to award the fields to Bleyzer’s company.

Bleyzer did not respond to questions about how he intended to answer the lawsuit. “I found out about it from you,” he wrote TIME, and said he “was a little surprised as any lawsuit would be totally groundless.” Bleyzer said he had reached out to Naftogaz to ask about the lawsuit, but had not received a reply. 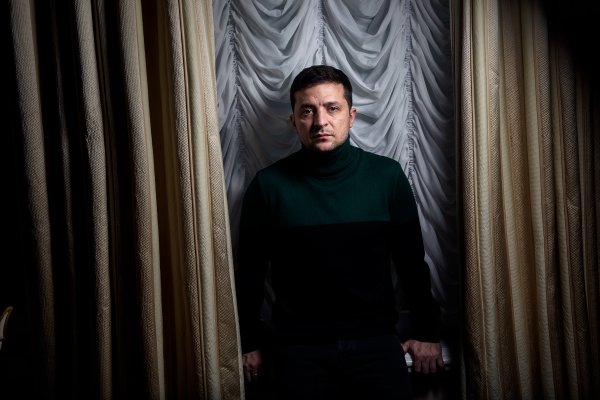 How Zelensky Is Navigating His Role in Trump's Impeachment
Next Up: Editor's Pick