Who Is This Bruno Mars Dude, and How Did He Get to the Super Bowl?

So here it is, Super Sunday. And you’re looking at the Super Bowl halftime show lineup and you figure you’re going to see a big name, like you do every year: Beyoncé, Tom Petty, Bruce Springsteen, Madonna, Prince.

Not this year. You’re looking for the headliner and all you keep seeing are two words: Bruno. Mars. You figure it’s a mistake, or maybe a typo. Bruno must refer to Bruce Willis’ would-be-pop-icon alter-ego. And the typo on Mars is that it was supposed to be MARY, and they just left off the rest: J. BLIGE.

But no. The scrawny little dude with the gravity-defying haircut named Bruno Mars is, in fact, your halftime entertainment. And just because you’ve never heard of him (if you’re over 35) doesn’t mean you should be taking a bathroom break or flipping over to the Puppy Bowl, because this tiny little keg of dynamite can rock your world.

This Is A Test: Every year the NFL trots out another big star for halftime. But people like Tom Petty and Bruce Springsteen don’t generate the kind of online furor that, say, Beyoncé and Destiny’s Child did last year. Bruno Mars is h.o.t.t. with the youngs.

OK, But I Still Don’t Know Who He Is: Bruno Mars was born Peter Gene Hernandez in Hawaii. He’s 28, of Filipino, Puerto Rican and East European Jewish (by way of Brooklyn) descent. He’s 5-foot-5, three inches taller than Prince. He grew up in a musical family, loving everything from reggae to rockabilly. In 2009, he co-wrote and sang on two Top 5 Billboard hits by hip-hop crooner b.ob. and rock-rap star Travie McCoy (of the band Gym Class Heroes). But the one that really scored was rapper Flo Rida’s “Right Round,” which featured vocals from trashy-party-girl-pop-tart Ke$ha. Mars co-wrote that worldwide smash, which set him up to sit in a room with the ultra-funky Cee Lo Green. When they were done, the two had come up with a little ditty called “F–k You” that took the universe by storm.

Well, What Does He Sing Himself? When he’s writing his own tunes, Mars relies on a canny mix of old-school soul, modern-day hip hop and Elvis-era rock theatrics. His first solo hits were “Just the Way You Are” and “Grenade.” They were followed by the even bigger hits “Locked Out of Heaven” and “When I Was Your Man.” All four of them topped the Billboard Hot 100 singles charts. And if you click through those links to YouTube, you’ll see that together they’ve racked up more than 1 billion views. One. Billion. Views. (More Than.)

Who’s He Gonna Perform With? A band you’ve actually heard of! The Red Hot Chili Peppers.

Will There Be Controversy? After Janet Jackson’s decade-old wardrobe malfunction and MIA’s gratuitous middle finger during Madonna’s set, the NFL has found its dream date in Bruno Mars. He’s as squeaky clean as it gets, despite the fact that he co-wrote “F–k You” and was arrested for cocaine possession a few years ago. (He got off light, with a fine and some community service.) The biggest risk of upset will be if one of the Chili Peppers’ socks falls off.

Anything Else I Should Know? He’s already been nominated for 18 Grammys and won two: Best Male Pop Vocal Performance for “Just the Way You Are” in 2011, and Best Pop Vocal Album for Unorthodox Jukebox in 2014. In the studio, his two biggest collaborators are Ari Levine and Philip Lawrence; together they are known as The Smeezingtons and have produced or written songs for Justin Bieber, Alicia Keys, Lil Wayne and Snoop Dogg, among others.

You are now fully up to speed. Enjoy the halftime show. And the folks here at TIME are no Hawks haters, but how can you not be rooting for Peyton Manning? 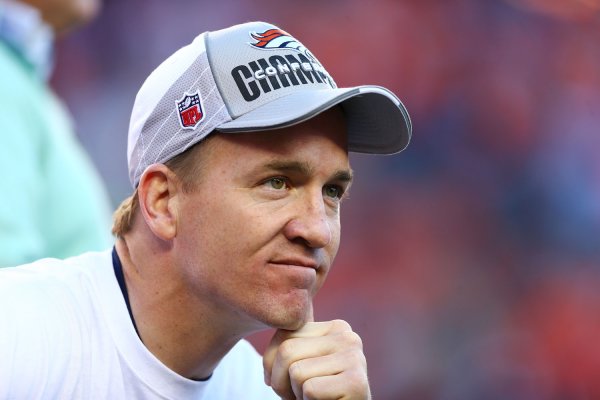 11 Super Bowl Questions You're Too Embarrassed to Ask
Next Up: Editor's Pick