Why Bernie Sanders Walked Back His Endorsement of Cenk Uygur

It’s been a messy day for Senator Bernie Sanders. When Sanders, one of the frontrunners in the 2020 elections, endorsed Cenk Uygur, a controversial congressional candidate in California with a long history of making problematic statements about women and other minority groups on Thursday, the move sparked immediate criticism from Democrats. By Friday afternoon, less than 24 hours after Uygur first tweeted about the endorsement, Sanders withdrew his support.

“Cenk has been a longtime fighter against the corrupt forces in our politics,” Sanders said in his statement of withdrawal on Friday. “However, our movement is bigger than any one person. I hear my grassroots supporters who were frustrated and understand their concerns.”

Uygur is the founder of left-leaning online outlet The Young Turks and one of several Democrats running to replace former US Rep. Katie Hill in California. Hill resigned from Congress in October after she was accused of having inappropriate relationships with subordinates. Uygur announced he would run for her seat in November, but he’s been under scrutiny since 2017, when The Wrap uncovered some of his old blog posts from the early 2000s in which he reportedly made sexist comments that included saying women are “poorly designed creatures who do not want to have sex nearly as often as needed for the human race to get along peaceably and fruitfully” and running down rules of dating, such as “there must be orgasm by the fifth date.” CNN and the Los Angeles Times separately reported he’d also made offensive remarks about other marginalized communities.

After the posts came to light in 2017, Justice Democrats, a powerful political action committee known best for backing Rep. Alexandria Ocasio-Cortez, cut ties with Uygur, who was until that point serving in the group’s leadership.

Uygur, who told TIME he deleted his posts about 15 years ago, has repeatedly apologized for his comments, including in an interview with TIME on Friday. He also said he “was not accepting endorsements” in his campaign, a move apparently designed to give Sanders cover to withdraw.

“I’ve decided that while I deeply appreciate Senator Sanders’ and others’ support, I’m not accepting endorsements in this campaign. So that’s a decision we made today, so none of this should be on Senator Sanders or anyone else who back me,” Uygur said in a phone interview. “The only endorsements I’m taking going forward are the voters of California 25th district.”

Uygur said Sanders’ was the only endorsement he had requested from a presidential candidate, and that he’d spoken with Sanders to thank him for backing him and tell him his decision not to accept endorsements. “He was very gracious. I told him I really appreciate his support, but I’ve decided to go in this direction.” Uygur told TIME he didn’t explicitly ask Sanders to withdraw his support.

Sanders’ endorsement, which took many by surprise, raised questions over whether progressives should embrace candidates with controversial histories that run counter to what they stand for. Asked by TIME why Sanders chose to endorse Uygur despite his past controversial comments, Sanders’ campaign did not answer the question.

Aimee Allison, founder of She the People, told TIME in a text Friday morning that women of color would have little tolerance for a candidate “unqualified to lead,” when she was asked for her thoughts on the endorsement. “Senator Sanders should know that, and we aren’t going back to the day when it’s ‘any Democrat’ no matter how vile. Some things cannot be overlooked,” Allison said.

She was not alone in her condemnation of the decision. “This isn’t one or two one-off comments, this is a decade-long history of some really rank sexist things,” Jill Filipovic, a Democratic author of a book on feminism, told TIME. “I just don’t think there should be room for that in the Democratic party, in progressive activist and in leftist activism… We’re just supposed to be better than that.”

The LA Times also reported that the president of California Young Democrats, which backs Sanders, called on Sanders to withdraw the endorsement.

So far, Sanders’ allies are largely staying quiet on the matter. A spokesperson for Ocasio-Cortez, Sanders’ highest-profile political endorsement, declined to comment when TIME inquired whether the congresswoman supported the Senator’s decision to back Uygur despite his past controversial statements. Inquiries to Reps. Ilhan Omar and Rashida Tlaib, two other highly visible progressive members of Congress who have backed Sanders, about whether they supported Sanders’ decision to endorse were not immediately answered Friday morning. Rep. Ro Khanna, a California progressive who serves as a national co-chair for the Sanders campaign who also endorsed Uygur, did not respond to a text from TIME asking to talk about the endorsement, but on Friday afternoon, he tweeted that he would also withdraw his endorsement.

Sanders’ decision was particularly striking given his lack of involvement in the primary in Texas’s 28th district district, an absence HuffPost noted Thursday prior to the Uygur endorsement. In that race, national attention has gone to immigration attorney Jessica Cisneros, a progressive candidate, in her bid to unseat Henry Cuellar, who has been branded as a conservative Democrat. Cisneros’ campaign did not respond to a request for comment on Sanders’ endorsement of Uygur.

The congressional seat Uygur is gunning for in the March 3 primary is one of the competitive seats Democrats flipped from red to blue in 2018. Among those running for it are George Papadopoulos, the former aide to Republican President Donald Trump who was the first to plead guilty during Special Counsel Robert Mueller’s investigation. Christy Smith, a leading Democratic candidate in the race, has received backing from other Democrats in the state, including that of House Speaker Nancy Pelosi. 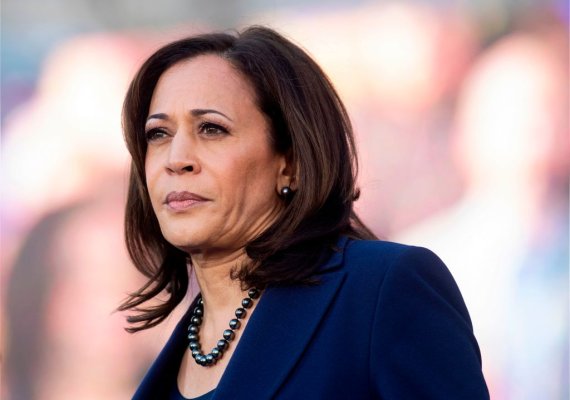 What Kamala Harris' Exit Means for Democrats' Diversity
Next Up: Editor's Pick