The Annual Geminid Meteor Shower Peaks This Weekend. Here's How to See it

The spectacular Geminids of 2017. Shot from Anza-Borrego Desert State Park. Smoketrees in the foreground and urban light pollution in the background.
Getty Images—Kevin Key
By Josiah Bates

The Geminid meteor shower is one of the most visible atmospheric phenomenons that occur every year.

The shower is expected to peak late tonight into the midnight hours. During peak hours, 120 meteors per can possibly be seen. Here is everything you need to know about the solar activity.

What is the Geminids Meteor Shower?

According to the American Meteor Society, the Geminid meteor shower is associated with an asteroid, rather than a comet, like most meteor showers. This asteroid, known as 3200 Phaethon, orbits around the sun and ejects dust when it is closest to the sun.

In the first few weeks of December, planet Earth is near the orbit of 3200 Phaethon and on December 14th of every year, Earth is closest to the orbit of the asteroid, which leads to the shower.

How can people see it?

Although the shower can be visible in the late evening, the best time to view it is around 2 a.m., no matter where you are in the world, according to EarthSky.

However since there will be an almost full moon on the night of December 13/14, some of the meteors will likely be blocked by moonlight.

Even with the moonlight, it is possible to see as many as 20 meteors per hour.

It’s recommended that people watch the sky for as long as possible to give their eyes time to adjust to the darkness, according to the American Meteor Society. There will also be intervals — some lasting as long as 15 minutes — where nothing is seen since meteor activity fluctuates during a shower.

EarthSky recommends at least an hour of observing.

Those that live in the city should find an open space away from city lights.

When’s the next meteor shower?

The next meteor shower will be Ursids, which will be active from Dec. 17 to Dec. 26 and peak between Dec. 20 and Dec. 22. This shower will only be visible from the northern hemisphere. 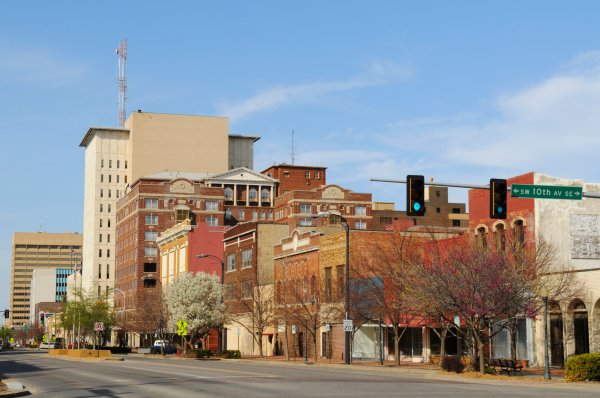 The City of Topeka, Kansas, Wants to Pay You To Live There
Next Up: Editor's Pick