The tens of thousands of mostly young demonstrators who have taken to the streets of Hong Kong over the past six months took first place in TIME’s 2019 Person of the Year reader poll.

More than 27 million votes were cast in this year’s survey, which offers members of the public the chance to vote on who they think had the most impact on the events of the last year. Last year, it was won by Korean pop stars BTS.

More than 30% of visitors to the 2019 poll selected the Hong Kong protestors, who have staged mass demonstrations in the semiautonomous city since June. The protests initially began in response to a controversial extradition bill, but have since grown into a outright rebellion demanding greater autonomy from China.

The protestors prompted the Hong Kong government to formally withdraw the bill, and have been credited with inspiring a record turnout at local elections held in November. But the demonstrations have grown more belligerent in recent months, as police have used increasingly aggressive tactics to confront a more radical core of protestors willing to use violence to achieve their goals.

Activists also took second place in the poll, as more than 4.5% of readers selected the climate strikers, protesters around the world who have marched to urge leaders to implement more environmentally sustainable policies.

Keanu Reeves, the actor who developed such a passionate fanbase that a change.org petition was created to make him the 2019 Person of the Year, came in third place and was selected by nearly 4.5% of readers.

Last year’s winner BTS, the seven-member Korean boy band with a fervent online following, came in fourth place this year, with just over 4% of the vote. Thunberg herself rounded out the top five.

Read about the 2019 Person of the Year, Greta Thunberg. 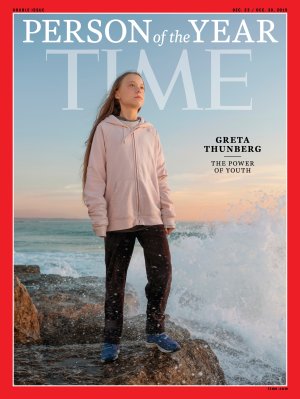 Greta Thunberg: TIME's Person of the Year 2019
Next Up: Editor's Pick