We Can Help Poor People by Treating Them With Respect

ATD Fourth World organized an event during the 30th World Day for Overcoming Poverty in Paris on Oct. 17, 2017.
Ludovic Marin—AFP/Getty Images
Ideas
By Esther Duflo and Abhijit V. Banerjee
Abhijit V. Banerjee is the Ford Foundation International Professor of Economics at the Massachusetts Institute of Technology. Esther Duflo is the Abdul Latif Jameel Professor of Poverty Alleviation and Development Economics in the Department of Economics at the Massachusetts Institute of Technology. They are the winners of the 2019 Nobel Prize in Economics. Their new book together is Good Economics for Hard Times

Abhijit remembers walking into a meeting at the EU headquarters and immediately noticing that this was very different from the ones he was used to. No suits, no ties, no high heels; lined faces, scruffy winter jackets, and also an eagerness he associated with college freshmen in their first week. These were people, he was told, who had experienced extreme poverty and were still very poor. They wanted to participate in a conversation about what the poor wanted.

It turned out to be nothing like anything he had ever encountered before. People quickly intervened and talked about their lives and about the nature of poverty and the failings of policy, drawing on their own experiences. Abhijit tried to respond, trying at first to be as delicate as possible when he disagreed. He soon realized he was being patronizing; they were in no way less sophisticated or less able to argue back than he was.

He left with enormous respect for ATD Fourth World, the organization that had convened the meeting, and an understanding of why its slogan is “All Together in Dignity to Overcome Poverty.” It was an organization that puts dignity first, even before basic needs.

Travailler et Apprendre Ensemble (“Work and Learn Together”), or TAE, is a small business started by ATD Fourth World to provide people in extreme poverty with permanent jobs. One winter morning, we went to Noisy-le-Grand in the east of Paris, to observe one of their team meetings. The group was discussing a company event. The atmosphere was relaxed but engaged, problems were discussed with seriousness, and everyone then went off to work. It could have been the weekly meeting of a small start-up in Silicon Valley.

What was different was the activities they were scheduling (cleaning services, construction, and computer maintenance). And the people around the table. Chantal, for example, had been a nurse, but disabled in an accident and unable to work, she lost custody of her four children to the state and ended up homeless. ATD offered her housing and directed her to TAE when she was ready to work. She had been working there for ten years when we met her, going from cleaning to software to becoming a leader. She was now contemplating starting a small NGO to help disabled people find work.

The key to the program’s success, according to Bruno Tardieu, a leader of ATD, is that “all their lives people have given them things. No one has even asked them to contribute.” The extreme poor are robbed of their dignity and their agency, made to understand that they should be grateful for help, even when they don’t particularly want it. Their resistance to the “gifts” they are offered, is often taken for ingratitude and obstinacy, which further deepens the trap in which they are stuck. In TAE, they make decisions together, train each other, eat together every day, and take care of each other.

What can a small business in France, employing less than a dozen very poor people and struggling to get by, teach us about social policy more generally?

First, given the right conditions, everyone can hold a job and be productive. Second, work is not necessarily what results when all the other problems have been solved and people are “ready,” but is part of the recovery process itself. Third, the deep disregard for the humanity of the poor is endemic in the social protection system. The suspicion that poor parents are bad parents, which led to Chantal losing her children for 10 years, is widespread. As a result, people will go to great lengths to avoid having anything to do with the social protection.

And this does not just affect some small sliver of the extreme poor who are different from the rest of us. When social “protection” symbolizes punishment and humiliation, it is the entire society that recoils from it. The last thing a worker wants when he has just lost his job is to be treated like “those people.”

A different model is possible. In Sénart, near Paris, we observed a meeting of “young creators” at the local unemployment office. A dozen young unemployed were talking about the businesses they wanted to start, e.g. a gym, a beauty parlor, and an organic beauty products shop. If this were a traditional unemployment program, the counselors at the meeting would pretty soon tell them what made sense for them to do (perhaps based on some machine-learning algorithm). The youths then have to conform (or lose their benefits).

Didier Dugast, who conceived the creators program, told us that more often than not, this approach fails totally. Most of these young people are used to being told what to do. They have also been told, in school and perhaps at home, that they are not good enough. They arrive bruised and wounded, with extremely low self-esteem, which often translates into an instinctive suspicion of everything offered to them.

The idea behind the young creators program is to start by taking the project they propose very seriously. We sat in on several long initial interviews: one of them was with a young woman who wanted to start a pharmacy for Chinese medicine. The caseworker took time to understand the project, without ever obviously judging it. More in-depth interviews followed, as well as a few group workshops. In all these conversations, the caseworker was focused on convincing her that she was in control of her destiny and had what it took to succeed. At the same time, it was also made clear that there was more than one way to succeed; perhaps the aspiring Chinese pharmacist could start training to become a nurse or a paramedic.

We were involved in the impact evaluation of this project. Nine hundred young unemployed who had applied for it were randomly assigned either to this program or to its traditional alternative. We found that the new program generated more employment and higher earnings, especially for those who were most disadvantaged to start with. Strikingly, the program actually reduces the probability of being self-employed, even though it begins with the applicant’s idea for starting a business. This is because the self-employment project is meant to be a starting point for a conversation that is effectively a form of therapy aimed at restoring confidence. A deep respect for the dignity of the young people is what made the Sénart young creators initiative work—many of them had never experienced being taken seriously by anyone in an official position (teachers, bureaucrats, law enforcement officials).

The same shift in attitude, from patronizing to respectful, was built into the Becoming a Man program, in inner-city Chicago. The program seeks to temper violence among young people. But instead of telling them it is wrong to be violent, it starts with recognizing that for teens in disadvantaged neighborhoods violence may be the norm, so being aggressive or even fighting may be necessary to avoid developing a reputation as a victim. Instead of telling participants not to fight, Becoming a Man asked kids from poor neighborhoods to think about when fighting was the appropriate reaction and when it might not be. Participation in the program reduced the total number of arrests during the intervention period by about a third, reduced violent crime arrests by half, and increased graduation rates by almost 20 percent.

What goes for youth in the Paris suburbs or Chicago’s South Side, also goes for fifty-something white men who were just laid off? While they may have problems, they are not the problem. They are entitled to be seen for who they are and to not be defined by the difficulties besieging them. Defining people by their problems is turning circumstance into essence. It denies hope.

The goal of social policy, in these times of change and anxiety, is to help people absorb the shocks that affect them without allowing those shocks to affect their sense of themselves. Unfortunately, this is not the system we have inherited. Our social protection still has its Victorian overlay, and all too many politicians do not try to hide their contempt for the poor and disadvantaged. Even with a shift in attitude, social protection will require a profound rethinking and an injection of lots of imagination. We clearly don’t have all the solutions, and suspect nobody else does either. But as long as we understand what the goal is, we can win.

Adapted from their new book Good Economics in Hard Times, published by PublicAffairs. 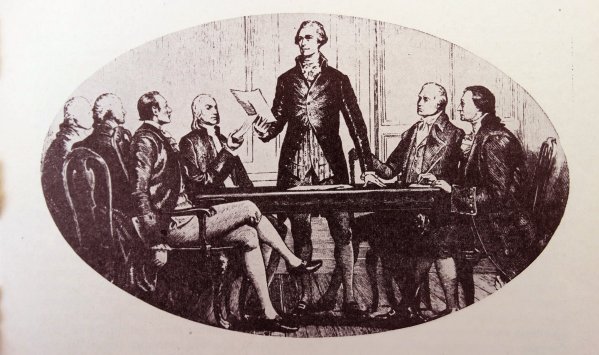 What Alexander Hamilton Would Have Thought About a Wealth Tax
Next Up: Editor's Pick