Seven days after the eruption caught visitors unaware, the official death toll has risen to 16, police said Sunday. Victims will continue to be identified.

An Australian national, Browitt was on the island with her father Paul and her sister Stephanie as apart of her cruise, and her mother had stayed on the cruise ship, according a GoFundMe page. Per the GoFundMe, Paul is in a coma in a burns unit in Auckland and Stephanie is in a burns unit in Christchurch.

New Zealand officials recovered six bodies from White Island on Friday, and are still attempting to locate two more on the island who are believed to be dead. Police said they continued their search in the waters on Saturday and Sunday where they believe the bodies are likely to be found.

Tremors on the island on Wednesday morning increased the likelihood for further eruptions, volcanists say, delaying efforts to recover the bodies of those presumed dead that remain on the island after the Monday eruption.

Friday’s recovery of the bodies was a dangerous operation. Military specialists carried out the four hour operation wearing hazmat suits and breathing apparatuses due to the treat of toxic gas, per the AP.

Ash and other fallout from the eruption have contaminated the water, and police divers have continued searching with near-zero visibility.

“The water around the island is contaminated, requiring the divers to take extra precautions to ensure their safety, including using specialist protective equipment,” said Deputy Commissioner John Tims, national operations commander, in a statement on the aquatic searches. “Divers have reported seeing a number of dead fish and eels washed ashore and floating in the water. Each time they surface, the divers are decontaminated using fresh water.”

Police said the the dive operation would have additional personal from the Navy Saturday afternoon.

The six bodies recovered Friday have been taken to Auckland where they will undergo a detailed five-step victim identification process, per police.

“The victims and their families are our priority but we also have important obligations. We must work on behalf of the Coroner to ensure correct identification. It would be unforgivable to get the identification process wrong,” said Deputy Commissioner Tims.

Forty-seven people were believed to be present on White Island during the eruption, police confirmed Tuesday morning. It is a popular tourist site on the north of the country.

Many of the survivors are injured, with some suffering severe burns, Police Deputy Commissioner John Tims said. In a statement Wednesday, Tims said 25 people are in critical condition. Ministry of Health officials confirmed Tuesday that there were 31 people injured, including 25 who are now in regional burn units across New Zealand. Twenty-seven people sustained burns across more than 30% of their body, according to Dr. Pete Watson, of the Ministry of Health. They range in age between 13 and 72.

A police helicopter, military aircraft and a drone have flown over the site. “No signs of life have been seen at any point,” national police said in a statement. “[We] believe anyone who could have been taken from the island alive was rescued at the time of the evacuation.”

Here’s what to know about the White Island eruption.

Where is the White Island volcano?

White Island, or Whakaari, lies 30 miles off the east coast of New Zealand’s North Island. It is one of the country’s most active volcanoes. The dramatic scenery and easily accessible conditions, make it a popular site for day trips and cruise stops.

The volcano has had six small eruptions in the last eight years, the BBC reports. But previous eruptions have happened when no tourists were on the island.

When did the volcano erupt?

The volcano erupted around 2 p.m. local time on Monday, Dec. 9.

A group of passengers from the Ovation of the Seas cruise ship was touring the volcano at the time, the New Zealand Cruise Association confirmed. “Our hope is that everyone will be recovered quickly and unharmed, but at this time we have no further information,” CEO Kevin O’Sullivan wrote in a statement.

Police said both New Zealanders and overseas tourists were among those present on the island. They were nine from the U.S., 24 from Australia, Five from New Zealand, four from Germany, two from China, two from the U.K. and one from Malaysia.

How big was the eruption on White Island?

The eruption sent a plume of smoke and ash around 12,000 feet high into the air. Michael Schade, a tourist who had left the island moments before it erupted, shared dramatic videos of the plume and people escaping the scene on Twitter.

GeoNet, a government agency that monitors volcanic activity and earthquakes in New Zealand described the eruption as “short-lived.” On Wednesday morning, the agency released a statement saying “The situation remains highly uncertain as to future activity. Eruptions in the next 24 hours are still likely to occur… Our monitoring equipment continues to function and is providing us with continuous data on the volcano’s activity.”

New Zealand’s national police agency confirmed the first named victim: 21-year-old Australian Krystal Eve Brownitt who was on the island with her family.

One of the victims was tour guide Hayden Marshall-Inman, who worked for the Whakatane-based White Island Tours, the AP said. His brother, Mark Inman, posted on social media that Marshall-Inman died doing what he loved.

Another tour guide, Tipene Maagi, is missing after the volcano erupted, and was identified as one of the victims by police on Sunday.

An American couple, Lauren and Mathew Urey, who were on their honeymoon, are in the hospital with severe burns after surviving the eruption, the AP reported. Mathew suffered burns on 80% of his body and is being treated at a Christchurch burn unit. Lauren had surgery for burns that covered 20% of her body on her lower extremities. She’s at another hospital in Auckland.

Other families are eagerly waiting for updates on relatives who have not been found yet. The Adelaide family from South Australia says that their son Gavin Dallow, his partner Lisa Hosking and her daughter Zoe Hosking were on the island when the eruption happened, according to the AP. Lisa Hosking was later found in a hospital but Zoe and Dallow were identified as victims on Sunday.

A family from Sydney is also reportedly missing, according to the AP.

Jesse Langford, a former student from Sydney’s Marist College North Shore, was with his sister, Winona Langford and their parents Kristine and Anthony Langford visiting the island when the eruption happened. Kristine and Anthony were among the victims identified by police on Sunday and Monday.

“Please have the Langford family in your prayers,” principal Duncan Troy said in a statement, according to the AP.

The family of Jason Griffiths shared on a GoFundMe account that Griffiths died Wednesday with his mother and grandmother by his side. He received burns to 80-90% of his body, according to the post.

“Jason will be remembered as loving and gentle young man. Respected and loved by family, friends and workmates,” the family wrote. “There are no words to describe our feeling of loss and heartbreak.”

The first identified American victims include teenagers Berend Hollander, 16, and Matthew Hollander, 13, who were Australian permanent residents. Matthew is the youngest victim so far identified. NBC News reports the brothers were with their parents, including Martin Hollander, an Australian national who was also identified as a victim. The Chicago Tribune reports the family lived in Chicago but moved to Sydney several years ago.

What has the emergency response been so far?

The New Zealand Defense Force and police were able to recover six bodies from the island on Friday when weather conditions improved. Two bodies have yet to be recovered, and officials believe both might be in water.

The search of the near zero-visibility water continued Sunday, as other officials plan how best to return to the island in the safest and most effective manner. An aerial search of the island was conducted Monday and two police staff were deployed to the island, police said.

Officials faced significant delays in recovery efforts due to unsafe and uncertain conditions on the island that continued after the Monday eruption. Toxic gases and ashfall, as well as the threat of further eruptions, blocked rescue workers from reaching the island. Officials announced Tuesday that there remained a 50% chance of a smaller or similar-scale eruption within the next 24 hours. Volcanic tremors Wednesday morning further delayed recovery efforts and increased the likelihood of eruptions.

“This has been a harrowing event for the Whakatane community and those family and friends directly impacted by the eruption,” Bush said in a statement. “The environment the recovery team faced today was highly unpredictable and challenging. They showed absolute courage and commitment to ensure we can offer some closure to the families and friends of those who have lost loved ones.”

Officials had a disaster victim identification specialist on standby to be deployed to the island when conditions improved, Police said Wednesday.

New Zealand Prime Minister Jacinda Ardern has traveled to Whakatane, a nearby town. “I know there will be a huge amount of concern and anxiety for those who have loved ones on or around the island at the time,” she told a press conference. “I can assure them police are doing everything they can.”

Police announced Tuesday that it would be working with Defense and Fire and Emergency NZ to deploy drones carrying measuring equipment to collect data on the status of the volcano as soon as windy conditions subside.

As questions have swirled regarding the safety of tour groups visiting White Island, New Zealand police have confirmed a “health and safety investigation” will be undertaken, “into the harm and loss of life caused by the eruption.” As of Tuesday, police have said “it is too early to confirm” whether a criminal investigation will be opened.

Because of the severity of the burn victims, Dr. Peter Watson, a chief medical officer, said at a press conference that extra skin had to be ordered from American skin banks, according to the AP.

Dr. Watson told the press that they will likely need 1,300 square feet of skin for patients to get skin grafts.

Was the area safe for tourism?

The AP reports that the GeoNet agency, which monitors volcano and earthquake activity in New Zealand, previously raised the alert level on White Island on Nov. 18 from one to two on a scale of five.

A five on the scale means that there is a major eruption. The alert was raised because of an increase in volcanic tremors as well as an uptick in sulfur dioxide gas, which comes from magma in the volcano, according to the AP.

Currently, the alert level for White Island is at a two.

One volcanologist, Brad Scott, told the AP that the alert levels on the island sometimes fluctuate up and down without eruptions happening. He also said that there have not been any significant problems in the past with tourists visiting the island.

At a press conference, Arden said that the safety of the island will need to be addressed in the future, but right now they’re “focused on those who are caught up in this horrific event.” 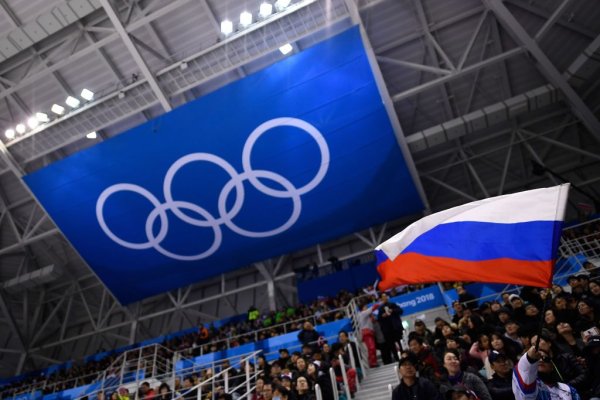 Russia Banned From Global Sports Competitions, Including Olympics, for 4 Years For State-Sponsored Doping
Next Up: Editor's Pick