'My Image Is Being Associated With Sexism.' Husband in Viral Peloton Ad Speaks Out About Enduring 'Negative Bandwagon' on Social Media

The husband in the infamous Peloton ad has spoken out. Sean Hunter, an actor and a teacher whose Instagram username is now “pelotonhusband“, spoke to Good Morning America on Friday, saying the public’s response has taken the ad down a dark path.

“My image is being associated with sexism, with the patriarchy, with abuse, for example,” he says. “That’s not who I am.”

Hunter plays the role of the husband in the now-infamous commercial, which has received more than 4.4 million views on YouTube and sparked internet outrage by people. In the ad’s opening scene, Hunter’s character gifts his wife a Peloton indoor bike. She then thanks him a year later as they rewatch a compilation video cycling through her greatest hits. “A year ago, I didn’t realize how much this would change me,” she says. “Thank you.”

It wasn’t long before social media was flexing its best creative muscles, with reactions memes, parody videos and bemused commentary going viral. Peloton’s stock went down after the backlash. The company responded on Wednesday in a statement to CNBC, saying “Our holiday spot was created to celebrate that fitness and wellness journey. While we’re disappointed in how some have misinterpreted this commercial, we are encouraged by — and grateful for — the outpouring of support we’ve received from those who understand what we were trying to communicate.”

Hunter also spoke to Psychology Today about the backlash. “I pride myself on being a great teacher and developing actor, and I can only hope that this affects neither. I’m grappling with the negative opinions, he said. “The aftermath of the commercial has left me with more questions than answers, and this is only half the story. I reflect on what my co-actor must be dealing with, as she’s the other 25 seconds of the story.”

During his interview with GMA, Hunter called out social media’s negative impacts on society. “Once something goes viral and it turns negative, people jump on that negative bandwagon and start to create any dialogue that they want,” he told GMA. 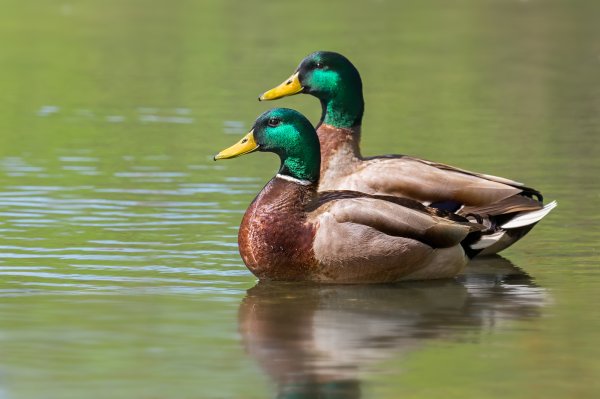 Take a Break and Hit Play on This Enthralling Video of Ducks Waddling Around a Glass Roof
Next Up: Editor's Pick