The family of Daphne Caruana Galizia, a Maltese journalist who was killed in 2017, have called on Malta's Prime Minister Joseph Muscat to resign immediately.
Matthew Mirabelli—AFP/Getty Images
By Rachael Bunyan

The family of a Maltese journalist who was murdered in 2017 have called on the country’s Prime Minister Joseph Muscat to leave office immediately and be placed under investigation as new evidence emerges about Daphne Caruana Galizia’s death.

“Justice can only be achieved if people continue demanding it… and if Muscat leaves office and is placed under investigation,” Caruana Galizia’s sister Corinne Vella told TIME.

More than two years have passed since a bomb detonated under the driver’s seat of the journalist’s rental car in October 2017. The unsolved murder of Caruana Galizia, who set out writing about local politics and ended up uncovering corruption at the highest levels of her country’s government, has left Malta in a worsening political crisis.

On Wednesday, a taxi driver named Melvin Theuma told a court how Maltese businessman Yorgen Fenech had contacted him in 2017 to organize the murder, with the words “get on with it. I want to kill Daphne,” Times of Malta reports.

Fenech, who pleaded not guilty to charges of complicity in the journalist’s murder on Nov. 30, was named in leaked legal documents, known as the Panama Papers, that exposed details of offshore tax havens and unorthodox accounting. Caruana Galizia had been investigating Fenech’s companies before she was murdered.

The businessman is also linked with top ministers including the Prime Minister’s chief of staff, who Fenech accused in court on Thursday of leaking key information about the murder investigation to him. The aide, Keith Schembri, has denied any involvement in the murder.

The fresh allegations about Muscat’s senior ministers add more pressure on the prime minister to leave office. After government ministers were arrested in relation to the journalist’s murder and subsequent protests in Malta’s capital, Valletta, demanding he resign, Muscat announced on Dec. 1 that he would.

But while Muscat set a Jan.12 date for his resignation as leader of the Labour Party, he declined to give a date for the end of his premiership — saying only he will resign as Prime Minister in “the days after.”

Muscat’s decision to stay on has angered Caruana Galizia’s family. “Days after could be anything from a day to several years,” Vella tells TIME. “Muscat needs to get out of Office, out of the Party, and out of the Parliament. He should have nothing to do with the investigation, other than as a suspect.” On Dec. 2, the family filed a judicial request calling for Muscat himself to be investigated over the murder.

“If he doesn’t go willingly, his cabinet should remove him,” Vella added. “Malta has to see that its institutions can work.”

Sophie in’t Veld, the head of a European Parliament delegation that met with Muscat in Malta on Tuesday for a fact-finding mission also said that the Prime Minister should relinquish power immediately due to “serious errors of judgement.” The journalist’s family is urging European lawmakers to consider sanctions if he doesn’t.

“In politics it is about trust. It is about the integrity of office. We have made it very clear that there is a problem,” in’t Veld said on Tuesday. “This is not just between the prime minister and the Maltese people. It is between Malta and the European Union.”

The investigation into Caruana Galizia’s murder took a turn after the Nov. 20 arrest of Fenech, whom media reports have linked to payments to senior government officials. The investigation has drawn in Muscat’s chief of staff, Keith Schembri, and two ministers—Tourism Minister Konrad Mizzi and Economy Minister Chris Cardona.

Within hours of each other, all three promptly resigned as police said they would widen the scope of the investigation to determine who was behind the journalist’s murder; Cardona has since been reinstated. Fenech had proposed to give information about the three government officials and “others close to the Prime Minister” in exchange for immunity, but this request was rejected. On Nov. 30, Fenech was charged with complicity in the journalist’s murder and pleaded not guilty. All three officials, deny any wrongdoing.

Appearing in court on Thursday, Fenech testified that Schembri had leaked information to him, divulging that his phone had been tapped and warning him of police raids in advance, the Times of Malta reported. The leaked information, Fenech alleges, continued even after Fenech’s arrest; he accuses Schembri of sending a message, via their doctor, with a “script” on what to say to the police. Schembri has denied any wrongdoing.

In court on Wednesday, Theuma, who was granted immunity from prosecution in exchange for information about Fenech, accused the businessman of masterminding the attack and said he was invited to the government headquarters after agreeing to arrange the murder and given a tour by Schembri. The taxi driver told the court that he had been put on the government payroll and he received a paycheck for three or four months for doing nothing. “If you asked me, I wouldn’t know what my job was at the ministry, as I never went,” he said.

He also testified how he acted as a middleman in the murder, arranging payments to Vincent Muscat and brothers Alred and George Degiorgio, who stand accused of carrying out the attack.

“The fact that people have been arrested, it’s only just the beginning,” Vella says. “We will see justice when everybody involved in the murder faces justice, and when everyone Daphne exposed faces justice as well.”

For Vella, she said hasn’t had chance to grieve her sister’s death. “There hasn’t been time to process her death. There was no time to sit around feeling sorry for ourselves and grieve properly. There will be time for that, but the first thing we need is justice,” Vella says.

Her sister believes that Caruana Galizia’s legacy as a crusading journalist will live on. “In all the chaos and craziness that followed [her death], lots of people stepped up. Malta was crawling with journalists,” Vella says. “Daphne’s legacy is that so many people have found a voice. People are protesting and it’s wonderful to see – I hope it becomes permanent, it gives us a lot of strength.”

Most Popular on TIME
1
Pope Francis Offers New Support for Same-Sex Unions
2
U.S. Swing States Revealed a Nation Plagued by Misinformation
3
TIME Replaced Its Logo on the Cover For the First Time in Its Nearly 100-Year History. Here's Why We Did It 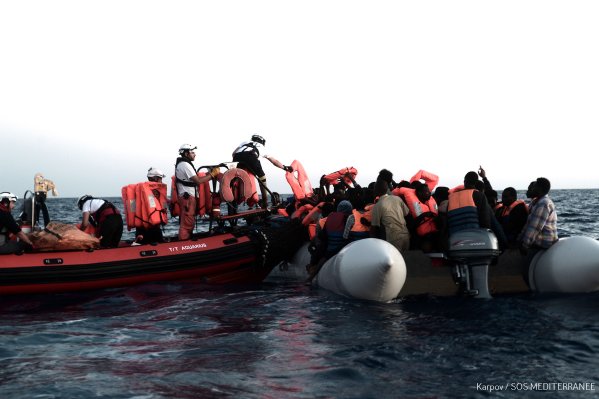 How One Migrant Ship Became a Symptom of a Sick Europe
Next Up: Editor's Pick