The Daydream of the 1960s Ended 50 Years Ago at Altamont. Here’s What the Rolling Stones' Official Photographer Saw That Day

Ethan Russell has a funny story about the late Jim Marshall, who helped create the archetype of the rock ‘n’ roll photographer. Marshall, who took epochal pictures of Bob Dylan rolling a tire and Johnny Cash flipping the bird, came across Russell on the sidewalk in San Francisco, at the height of the Haight-Ashbury hippie moment, snapping photos of the band Blue Cheer. Russell’s brother was one of the band’s managers, but that didn’t stop Marshall from issuing a threat.

“He said, ‘Get out of here, kid. This is my territory,’” Russell remembers with a laugh.

Russell, as it turned out, had bigger things in store. Soon, he would move to England, where an acquaintance with a journalist led to an offer to meet Mick Jagger. Jagger liked the young American’s style; they bonded over their mutual admiration for Elvis Presley.

Russell was quickly welcomed into the Rolling Stones’ inner circle, and would serve as the group’s chief photographer for the next several years. He was the band’s only official photographer on the Stones’ 1969 U.S. tour, which ended on Dec. 6, 1969, with the infamous free concert at Altamont Speedway, about 60 miles east of San Francisco.

Hastily organized as a West Coast answer to Woodstock, Altamont would prove to be the negative image of the “peace and music” festival in upstate New York. An estimated 300,000 fans swarmed the remote location, where the memories created were not about the transcendent music but the rampant violence and the drug casualties. The murder of concertgoer Meredith Hunter, stabbed by a Hell’s Angel who was part of the concert’s security force, was captured on film and included in the 1970 documentary Gimme Shelter. The spectacle has long been cited as the death knell of the era’s utopian daydream.

“If you want a marker, Altamont’s it, for sure,” Russell says.

Ten years ago Russell published Let It Bleed: The Rolling Stones, Altamont, and the End of the Sixties, a coffee table book of observations from that ill-fated tour. To mark the 50th anniversary of Altamont and the decade that would, both for better and for worse, forever define his generation, Russell has just published Ethan Russell: Photographs, a career-spanning collection that features not just the Rolling Stones but also the Beatles performing on the Apple Records rooftop in London; the Doors, Cream and Janis Joplin onstage in 1969; and the members of the Who on the bad-boy lark that would appear on the classic cover of Who’s Next.

For Russell, who lives north of San Francisco, the meaning of the ’60s remains elusive. One thing he does feel confident about, however: It couldn’t be captured in pictures.

“A lot of the meaning came from internal experiences,” he says. “It could be shared, but it couldn’t be shown.”

He’s always preferred spontaneity to portraiture — “What you want is a picture of somebody who’s engaged in something that has nothing to do with having their picture taken,” he says — and believes that his determination to blend into the background is a big reason why all those world-famous musicians didn’t mind having him around.

“I’m not a groupie,” Russell says. “And what I’m really not doing is trying to be buddies with anybody.”

Growing up on his parents’ farm near Santa Barbara, Russell, 74, would keep himself occupied by wandering down to the orchard with a .22 caliber rifle.

“The minute you get close to where you think you’re going to see a bird, you slow down,” he recalls. “You‘re hunting! Then you’re really quiet, real still, and if something shows up, you have to be fast and precise. You don’t get another shot. Here and gone. And I realized, for the most part, that’s exactly how I take pictures.”

Though he was just behind the Stones at Altamont when Hunter was murdered, Russell says he didn’t see it happen. With the makeshift stage sagging badly, he’d jumped on top of a rented equipment truck, he says – right next to the cameraman who got the footage of the attack shown repeatedly, in slow motion, in Gimme Shelter.

Being present amid the chaos at Altamont, Russell recalls, “was like being underwater. It was surreal.” He likens the movement of the crowd, crushed up against the stage, to the undulation of a sea anemone: “All of a sudden it opens up, and there’s this hole in the middle of a group of people. You’d hear screams, and see these pool cues going up and down. It was a nightmare, honestly, but I can’t say I processed it in any coherent way.”

By then, long after nightfall on a dismal, distressing day, he just wanted to leave. After the Stones stopped playing, Russell did get out, climbing on board the second helicopter with bassist Bill Wyman. The best photo he captured at Altamont is less about Mick Jagger prancing across the stage than it is about the faces in the crowd. Some of the young men and women nearest the stage are grinning vacantly. But the ones with clear eyes look absolutely terrified. 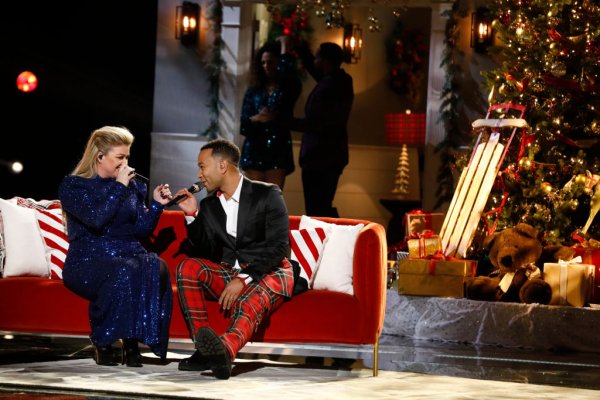 ‘Baby, It's Cold Outside' Was Controversial From the Beginning. Here’s What to Know About Consent in the 1940s
Next Up: Editor's Pick