The WWII Incarceration of Japanese Americans Stretched Beyond U.S. Borders

The incarceration camp at Manzanar, Calif., in 1942
Bettmann Archive
By Erika Lee

Isamu “Art” Shibayama was 13 years old and living comfortably in Lima, Peru, when the Japanese attacked Pearl Harbor. Although the attack occurred in the United States and Peru was a noncombatant during the war, he and other Japanese Peruvians were frightened. Anti-Japanese xenophobia had been spreading for decades throughout Latin America, often influenced by U.S. attitudes and actions. As rumors began circulating in Japanese Peruvian communities, the Shibayama family stayed glued to the radio and waited for news. But they were still unprepared for what happened next.

Along with 1,800 Japanese Peruvians, the Shibayamas were rounded up by Peruvian police, turned over to American troops, forcibly removed from Peru on U.S. transport ships, and sent to American prison camps in Crystal City, Texas. They would remain incarcerated as “enemy aliens” in the U.S. until 1944.

The history of the United States’ incarceration of Japanese Americans is known as one of the darkest chapters of American history. But there are still many parts of this story that most Americans don’t know. The history of Japanese Latin Americans during World War II is one of those. Not just another example of wartime atrocity, it also sheds light on the impact of American xenophobia around the world and its tragic consequences.

Long before Pearl Harbor, Japanese immigrants had been the targets of some of Americans’ most virulent and violent xenophobia, purportedly in defense of an “America for Americans.” Labeled undesirable and dangerous foreigners in the United States, Japanese people were confronted with immigration restrictions and laws that curbed their rights in the United States. After the attack, they were feared for their supposed loyalty to Japan, and the U.S. government treated them as both a racial problem and a national security one. The response was harsh. After President Franklin Delano Roosevelt signed Executive Order 9066 in February of 1942, the government initiated the forced relocation and mass incarceration of 120,000 Japanese Americans. Forced from their homes, they were sent to prison camps as “prisoners without trial” for the duration of the war. Two-thirds were American-born citizens.

But as xenophobia became an integral part of America’s foreign relations during World War II, that defense of “America for Americans” expanded far beyond the actual borders of the United States. At the same time that it was incarcerating its own residents and citizens, the U.S. government was also orchestrating and financing the mass roundup of innocent men, women and children of Japanese descent in 12 Latin American countries, citing “hemispheric security.”

The officially stated goal was to make the nation’s southern border safe from infiltration or attack by the Japanese enemy, including Japanese-descended people in Latin America who had been in the region for generations. According to U.S. government documents analyzed after the war, the unofficial goal was to acquire a supply of people of Japanese ethnicity who could be traded for American civilians stranded in Japan after Pearl Harbor.

Beginning in April 1942, Peruvian and U.S. authorities started to initiate an extensive deportation and incarceration program that sent 1,800 Japanese Peruvians to the United States. The first ship sailed out of Callao on April 5, 1942. Between that month and October of 1944, four ships operated by the U.S. government transported Japanese Peruvians and other Japanese Latin Americans to the United States.

When it was their turn, Art Shibayama and his family were marched over the gangway surrounded by U.S. soldiers carrying rifles with fixed bayonets. They arrived in New Orleans in the spring of 1944 and were taken to a U.S. Immigration and Naturalization Service (INS) facility, where they were forced to remove all their clothing and stand naked in groups while they were sprayed with insecticide. They were also officially processed by U.S. immigration authorities, who classified the new arrivals as “illegal aliens” who were entering the country without valid visas and passports—an action that one official later called legal “skullduggery.”

The fact that they were innocent noncombatants who had not been accused of, charged with or indicted for any crime made no difference.

Few Japanese Latin Americans, if any, received any sort of legal hearing at the time of their deportation. Most did not know why they were being forced from their homes and imprisoned in the U.S. By the time the program ended in 1944, a total of 2,264 Japanese Latin Americans, including citizens and permanent residents of 12 Latin American countries, had been incarcerated in the United States. Nearly 900 of them were exchanged for American civilians in Japan. One thousand were deported to devastated postwar Japan, a country that many had never been to, at the end of the war. Peru and other Latin American countries refused to let most Japanese return to their former homes.

And 365 Japanese Peruvians like Art Shibayama fought for the right to remain in the U.S., with the help of lawyers from the American Civil Liberties Union. While waiting for the U.S. to adjust his immigration status, Art was drafted into the U.S. Army in 1952. He served honorably for the country that was trying to kick him out. The Shibayamas were finally granted entry visas in 1954.

In his later years, Art and his wife Betty became fierce advocates in the Japanese American redress movement, which established a government commission to investigate the government’s claim that incarceration had been a “military necessity.” In 1982, the commission issued a scathing rebuke of the government’s actions and condemned the “grave injustice” done during the war. Japanese Americans eventually received an official apology from the U.S. government and a reparation payment. Applications from Japanese Latin Americans like Art Shibayama, however, were denied, because the government had designated them as illegal aliens at the time of incarceration. Art continued to fight for a full apology and fair restitution on behalf of all Japanese Latin Americans. But it never came. When he died in 2018, his lifelong quest for equal justice remained unfulfilled.

Today, Japanese Americans and other Asian Americans have been some of the most vocal critics of contemporary policies like the 2017 travel ban limiting immigration from six Muslim-majority countries, which those advocates see as mirroring the government-sanctioned discrimination of which their communities were the target during World War II. In previous years when they had gathered as a community to recognize the anniversary of the signing of Executive Order 9066, many Japanese Americans had asked themselves “could it happen again?” In 2019, they now answer “It already is.”

Erika Lee is the author of America for Americans: A History of Xenophobia in the United States, from which this essay is adapted. 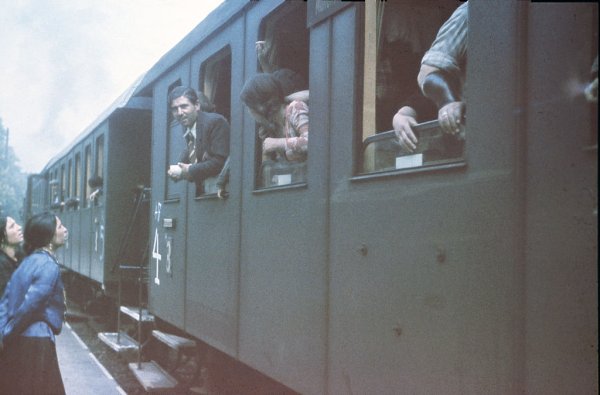 The Persecution of the Roma Is Often Left Out of the Holocaust Story. Victims’ Families Are Fighting to Change That
Next Up: Editor's Pick