Kamala Harris Dropped Out of the 2020 Presidential Race. But Democrats Are Already Betting on Her Comeback

California Sen. Kamala Harris, once a promising presidential hopeful, announced she was dropping out of the 2020 presidential race on Tuesday, a stunning turn just weeks ahead of the Iowa caucuses.

“I’ve taken stock and looked at this from every angle, and over the last few days have come to one of the hardest decisions of my life,” Harris told supporters in an email. “Although I am no longer running for President, I will do everything in my power to defeat Donald Trump and fight for the future of our country and the best of who we are.”

While Harris generated some of the most buzz of any of the Democratic candidates, she struggled to define her candidacy in a wide primary field. After a brief polling peak this summer, she had seen a return to low single-digit numbers, though she still regularly polled among the top five. Those poor numbers were compounded by a steady drum beat of negative press accounts of the internal workings of her campaign, with staffers accusing the campaign of having an unclear structure and lack of clarity in its direction.

Throughout her campaign, Harris publicly struggled with her stances on issues ranging from health care, where she initially said she supported getting rid of private insurance plans and then released a health care plan that left a large role for private insurers, to busing, which she successfully cornered former Vice President Joe Biden on from the debate stage but then struggled to come up with her own position on the matter.

Harris also made dramatic shifts in the way she approached the primary. At the end of October, her campaign announced they would cut staff and focus on Iowa in February, with the plan at the time including a seven-figure ad buy in the first-to-caucus state.

In the end, the money evidently wasn’t there to do even that. On Tuesday, Harris said she was leaving the race due to a lack of financial resources. “I’m not a billionaire. I can’t fund my own campaign,” she wrote, taking an apparent jab at some of the self-funded candidates, among them Tom Steyer and Michael Bloomberg. “As the campaign has gone on, it’s become harder and harder to raise the money we need to compete.” Up through the third fundraising quarter, Harris’s fundraising, while lower than the other frontrunners, has been comparable to some of the candidates still in the race, like outside candidate Andrew Yang.

“Any one of us can look at the math … and understand that there’s only so much to go around, whether that’s oxygen or dollars raised, and so it’s disappointing that she wasn’t able to pull things farther,” said Tracy Sefl, a longtime Democratic strategist who praised Harris. “I think whether it’s this Democratic nominee for 2020 or beyond, any Democrat who’s got their head screwed on straight will always have her on a short list.”

Harris speaks at her town hall in Waterloo, Iowa, on Sept. 20, 2019.
September Dawn Bottoms for TIME

Despite her difficulties, Tuesday’s announcement was the culmination of a surprising fall for a campaign that started strong. Harris became the second black woman to serve in the Senate in 2016 and had presidential rumors floating about her before she even reached Capitol Hill. She had been making the case that “justice is on the ballot,” leaning into her career experience as a district attorney and attorney general, while out campaigning.

That same track record as a California prosecutor also became a source of criticism, however. “I think she could have been more progressive,” Akunna Cook, a policy and political strategist and former director of the Black Economic Alliance, told TIME in September. “She didn’t have to, for instance, be as tough on truancy as she was. Or she didn’t have to pursue some of … the convictions that she did. She didn’t have to do some of those.”

As the news of her departure from the race broke, several of Harris’ fellow candidates took to social media to express their support.. “I’ve loved serving with her in the Senate and every moment we’ve run into one another on the trail,” Sen. Cory Booker tweeted. “Her campaign broke barriers and did it with joy. Love you, sister.” Pete Buttigieg lauded Harris for “advocating for the voiceless and the vulnerable and tweeted she would “continue to fight fearlessly on behalf of the American people—and our democracy.”

"X" marks the spot where Kamala Harris sits for a radio interview in Waterloo, Iowa, in September.
September Dawn Bottoms for TIME

Though her 2020 presidential campaign has ended, Democrats say they are certain they will be hearing from Harris again. “She was one of my favorites,” said Harold A. Crawford, Jr., chair of the Aiken County Democrats in South Carolina, on the news that Harris was dropping out. Asked about her political future, he added, “I think she would make a good cabinet person, maybe an attorney general.”

New Hampshire Democratic Party Chair Raymond Buckley told TIME that the number of candidates and number of undecided voters made for a volatile field. “Unfortunately for Senator Harris this wasn’t her cycle, but I’m positive it won’t be her last,” Buckley said. “I would not be surprised to see her as President at some day in the future.”

For now, holding coveted spots on both the Senate’s intelligence and judiciary committees, Harris is likely to spend more time in Washington, where the President may soon face an impeachment trial in the Senate. On Tuesday, after she announced she would suspend her campaign, Trump tweeted tauntingly, “Too bad. We will miss you Kamala!” Her response was curt: “Don’t worry, Mr. President. I’ll see you at your trial.” 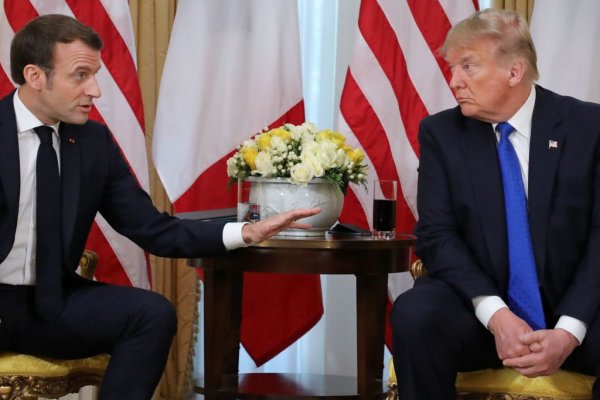 'Let's Be Serious.' Trump and Macron Hold Tense Meeting At NATO Summit in London
Next Up: Editor's Pick