Police on the scene on an officer invloved shooting at Oshkosh West High School after an armed student confronted a school resource officer on Tuesday December 3, 2019, at in Oshkosh, Wis. Police in Oshkosh say a police officer and an armed student whom he confronted at the school were both wounded in the confrontation Tuesday morning.
Wm. Glasheen/The Post-Crescent via AP
By Josiah Bates

An officer-involved shooting at a Wisconsin high school has left a student and police officer injured in the second school shooting incident in the state in as many days.

According to the Oshkosh Police Department and the Oshkosh Area School District, the shooting occurred after an armed student confronted a school resource officer at Oshkosh West High School.

The 16-year-old student was armed with an “edged weapon” and stabbed the officer who then shot at the student and hit him once, according to Oshkosh Police Chief Dean Smith.

The student and officer were taken to a local hospital and are being treated, Chief Smith said. Other officers cleared the students and staff from the school and secured the location. Police do not believe there are any additional suspects.

“This incident is being turned over to the state department of criminal investigations who will conduct the investigation,” Chief Smith said at the press conference.

The school was placed on lockdown after the incident, and authorities directed parents to reunite with their kids at Perry Tipler Middle School.

“Our students’ safety is our number one priority, we are committed to providing a school environment where students can feel safe in mind and body,” Oshkosh Area School District Superintendent Dr. Vicki Cartwright said at the press conference.

Stephanie Carlin, a local school board member and mother of two boys who attend the high school, told the Associated Press that this is a parent’s “worst nightmare.”

Carlin says she received a text from one of her sons that said “it [the incident] was crazy.” Both of her sons are safe.

Tuesday’s shooting comes just one day after a 17-year-old male student was shot and wounded by police after pointing a gun at officers in a classroom at Waukesha South High School in Wisconsin, about 80 miles south of Oshkosh.

Waukesha Police Chief Russell Jack told reporters Monday that a school resource officer rushed into the classroom and escorted other students to safety. That school was also placed on lockdown.

“The suspect would not remove his hands from his pocket and continued to ignore officers’ commands,” Jack said. “The suspect removed the handgun from his waistband and pointed it at the officers. An officer was forced to discharge his firearm, striking the suspect.” 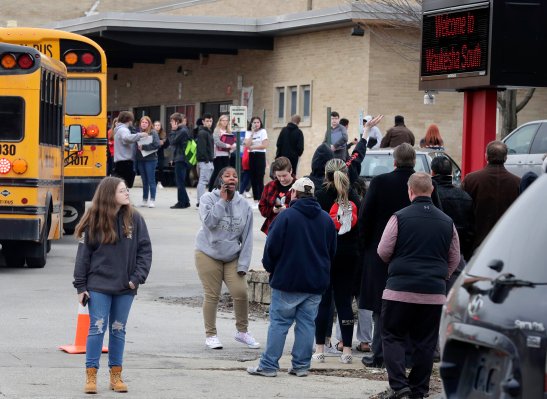