North Korea said it was preparing a choice of “Christmas” gifts for President Donald Trump, in the country’s latest effort to pressure the U.S. to offer more concessions in nuclear talks before the new year.

Top North Korean diplomat Ri Thae Song said in a statement Tuesday that the onus was on the U.S. side to determine how the regime would behave through the holiday season. Ri also accused the Trump administration of attempting to drag out talks and “use it in favor of the political situation and election in the U.S.,” according to the state-run Korean Central News Agency.

“Drawing nearer is the year-end time limit the DPRK set for the U.S.,” Ri said, referring to North Korea’s formal name. “What is left to be done now is the U.S. option and it is entirely up to the U.S. what Christmas gift it will select to get.”

North Korean leader Kim Jong Un has refrained from tests of nuclear bombs and missiles capable of carrying them to the U.S. for more than two years as he pursued unprecedented talks with Trump. But in recent months, he has warned that he would find a “new path” if the U.S. doesn’t ease up on sanctions and other policies that Pyongyang views as hostile.

Kim has reminded the region of his military might with shorter-range ballistic missile tests, the most recent of which came on the U.S. Thanksgiving holiday in late November. North Korea has a habit of timing some of its weapons tests to coincide with major events on the international calendar, including an intercontinental ballistic missile test in 2017 that coincided with Independence Day in the U.S.

The Kim family leaders who have ruled North Korea since its founding are revered as demigods and the state is seen as one of the most intolerant in the world of religion. The U.S. State Department has said North Korea punishes those who practice religion through torture, imprisonment and even execution, according to its Report on International Religious Freedom.

The Trump administration has called for North Korea to give up its nuclear weapons before it can receive rewards, a move Pyongyang sees as political suicide. Kim’s regime has called for a step-by-step approach where any moves it makes toward disarmament are simultaneously met with a reward.Kim and Trump have met three times since June 2018 and have little to show for their unprecedented diplomacy. While they initially pledged to “work toward complete denuclearization of the Korean Peninsula,” the two sides have so far failed to agree on what that means.

Any major actions from Kim may be announced on Jan. 1, a date when North Korean leaders typically deliver a New Year’s address that lays out the policy priorities for one of the world’s most reclusive states. 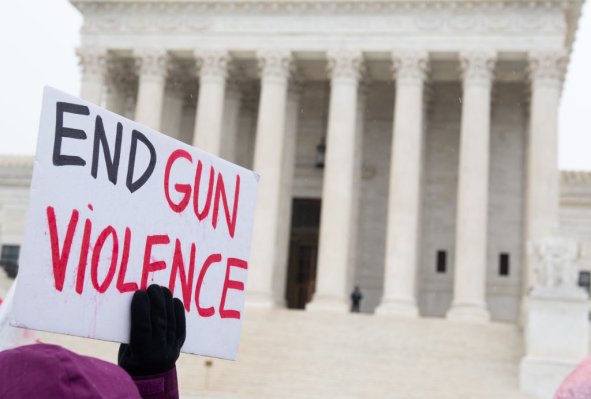 'A Lot Is at Stake': Supreme Court Weighs First Major Gun Rights Case in Nearly a Decade
Next Up: Editor's Pick