Twelve years after Barack Obama won the White House on a motto of “hope and change,” the four top-polling Democrats competing to succeed Donald Trump in 2020 have mined that message for parts: this time, hope is on one side; change on the other.

The Hopers include former Vice President Joe Biden and South Bend, Ind., Mayor Pete Buttigieg, both of whom have staked their campaigns on a soothing promise of restoring American unity. They talk about peace and forgiveness, about bridging the divide and bringing white working class voters back into the fold. “We choose hope over fear! We choose unity over division!” Biden likes to say on the stump. Buttigieg, who often says he’s reaching out to “future former Republicans,” promises “a White House that you can look at on the news and feel your blood pressure go down a little bit.” (This week, New Jersey Senator Cory Booker, another Hoper who has campaigned on “radical love” and “coming together,” announced a new tour of Iowa called “Lead With Love.”)

The Changers, meanwhile, include Senators Bernie Sanders and Elizabeth Warren, who are positioning themselves as fighting for systemic overhaul. Their campaigns promise sweeping economic changes to benefit an American middle class increasingly beleaguered by languishing incomes, mounting debt and systemic inequalities that seem forever warped in favor of the rich. Bernie Sanders, who has long campaigned on “revolution,” recently had a viral moment when he asked supporters to promise to “fight for someone I don’t know.” Warren, often with a fist in the air, strikes a similar tone. “Anyone who comes on this stage and tells you they can make change without a fight is not going to win that fight,” she says.

This divide between Hopers and Changers is more than just messaging. It’s a glimpse into the emotional tension underpinning the Democratic primary—and that matters. Policy wonks and Washington pundits like to describe the Democratic primary as an ideological tug-of-war: moderates versus progressives, centrists versus an insurgent Left, pragmatic policy tweaks versus sweeping proposals. But politics are more visceral than that. Voters are humans who make decisions based on gut and mood, not white papers. They may harbor preferences about one candidate’s proposed tax policy over another’s, but they’ll end up voting for the person that best reflects their vision for the future of America. Do they want to heal the country after Trump’s divisive term? Or do they want to burn the whole rigged system to the ground? Which is more important, hope or change?

And here’s the twist: those emotional preferences don’t always break down on predictable ideological lines. Just look at the 12% of Sanders 2016 voters who picked Trump in the 2016 general election. Or the 6.7 million who voted for Obama in 2012 and then for Trump four years later. Those decisions helped decide that election—and they were gut decisions, not policy calculations.

From churches in South Carolina and high school gyms in Iowa to old opera halls in New Hampshire, voters have explained to me their decisions in emotional terms, not ideological ones. Some working class, culturally conservative Democratic voters are gung-ho for Sanders, precisely because of his promise to overturn a system that feels rigged. And some left-leaning Democrats, exhausted by partisan battle, told me they plan to support Buttigieg precisely because they’re yearning for the nation to return to relative political calm.

The standard Washington narrative has it that moderate candidates like Biden and Buttigieg (along with new entrants like billionaire Michael Bloomberg and Massachusetts Gov. Deval Patrick) will attempt to win by wooing independents and swing voters, while progressives like Sanders and Warren will attempt to win by electrifying the base and driving voter turnout. But if there was ever a lesson from 2016, it’s not that simple. Now more than ever, it’s about emotion over ideology.

Laura Hubka, chair of the Howard County Democrats, who served as an Iowa precinct captain for Sanders in 2016, told me she was supporting Buttigieg in 2020 not because her ideology has changed, but because her mood has: “Trump made things different,” she says. “The world looks different to me now.” Meanwhile, some Republicans suggest that Sanders—rather than more centrist candidates—is Trump’s biggest competition among rural voters. “I worry about him the most,” former Wisconsin Governor Scott Walker told McClatchy, describing Sanders’ antiestablishment bonafides. “Because I think a lot of voters, particularly in the bubble, forget it’s more about a gut check than a policy list.”

When I ran this taxonomy by some Democratic strategists—dividing the Democratic field into Hopers versus Changers, healers versus fighters—they agreed that voter behavior is rarely determined by ideology alone. “Ideology is generally a surrogate for other things,” Democratic strategist David Axelrod told me. When Obama was elected in 2008, he explained, it was partly because of his opposition to the war in Iraq, but it was also “more about a style of leadership that offered hope to get out of a very dark period in our politics.”

Rashad Robinson, president of Color of Change, said that Democratic voters’ preferences in 2020 are also shaped in part by their experience of the Obama years. “If you believe that we achieved what we needed to achieve in the Obama years, you’re a healer,” he said, explaining that those voters are going to be more drawn to messages of hope. “If you had a different opinion about what we could achieve, and we didn’t quite get there, then you might be a fighter: because you recognize that the forces that stood in the way of so much of what Obama wanted to do are not going to be disrupted just by bringing people together.”

The first caucus in Iowa is still is still two months away, an eternity in campaign-time. But it’s already clear that this primary season will play out at the intersection of two historical crises that could have very different implications for voters’ moods.

First: never in American history has an incumbent President headed into a re-election campaign under an impeachment inquiry. And in times of national crisis, Democrats historically have tended to win with a calm, hopeful message. After Nixon’s resignation, Carter successfully ran on a message of returning a “good, and honest, and decent” government to the American people. After two terms of George W Bush’s wars, Obama successfully ran on a message of audacious hope. In fact, every Democrat elected to the presidency since the 1960s won on an optimistic, unifying message. Score one for the Hopers.

But the second historical crisis points in a different direction: beyond the sturm and drang of the Trump presidency, Americans are grappling with the most unequal economic landscape since the Gilded Age. According to the Federal Reserve, the top 1% of Americans now own 29% of the nation’s wealth: that’s more than the wealth of the entire American middle class, combined. And it’s gotten dramatically worse through the Obama administration. In the 10 years since the Great Recession, households in the top 0.1% have seen their incomes rise 30%, while most Americans have seen their modest wage increases eaten up by soaring costs. While the stock market is high and unemployment is low, the majority of Americans are putting in longer hours, working more jobs, and making only marginally higher wages while paying more for everything from education, child care, housing, and health care. The middle class is exhausted, underwater, and pissed off. That’s a point for the Changers.

So Democratic voters are teed up this cycle, but they’re teed up for different reasons. Those who see Trump as uniquely dangerous—his overtures to dictators, his administration’s parade of corruption scandals, his invitations to foreign leaders to interfere in our democracy—believe that getting rid of him will pave the way for a hopeful future. Those who are furious at the structural inequalities that persisted over the last decade—rampant income inequality, a dying planet, unaffordable health insurance, crushing student debt—believe that Trump is merely the symptom of a corrupt system, one that needs to be overhauled with major structural change.

But other polling suggests that the truly persuadable voters are drawn to those who can restore hope. According to a New York Times/Siena College poll of voters across six competitive states, more than 8 in 10 persuadable voters are looking for someone who can bring the country together over someone who will fight for a progressive agenda. Three-quarters said they preferred a moderate over a liberal. Pennsylvania Lieutenant Governor John Fetterman, who supported Bernie Sanders in 2016, now cautions against an increasingly purist progressivism. The candidate most likely to win Pennsylvania voters, he says, is someone who “embraces a muscular version of progressivism but not one that that’s too extreme, the one who understands that there are people who may have voted for Donald Trump but they shouldn’t be written off.” 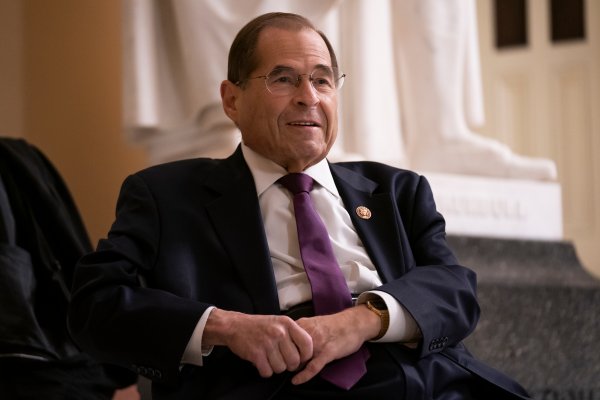 All Eyes on Rep. Nadler
Next Up: Editor's Pick