See the Artists Who Dominated Spotify in 2019, From Post Malone to Billie Eilish

Newcomers Lil Nas X and Lizzo might have had monster years in 2019, but Post Malone was still the number one artist on Spotify. The streaming service released its year-end data on Wednesday in its annual “Wrapped” campaign, which also included statistics from across the decade. The report illustrates how much streaming has grown in that time—and how dominant hip-hop has become in this new ecosystem.

Over the past decade, streaming has turned from a curiosity into the bulk of the music industry, now making up about 80% of its overall revenue, according to the Recording Industry Association of America. Spotify is the leader in the field, with more than 110 million paying subscribers and almost 250 million total active users, compared with over 60 million subscribers for Apple Music. (In contrast, in 2012, TIME reported that Spotify had just 4 million paying subscribers.)

This year, Post Malone led the way with over 6.5 billion Spotify streams across the globe. Many songs on his album Hollywood’s Bleeding, released in September, have cleared 100 million streams—including “Circles,” which reached number one on the Billboard Hot 100 last week. But Hollywood’s Bleeding wasn’t the biggest album on Spotify this year—it lost out to Billie Eilish’s WHEN WE ALL FALL ASLEEP, WHERE DO WE GO?, the debut studio album from the 17-year-old California phenom.

Spotify’s most streamed song might be surprising to those who have been following the charts this year. Lil Nas X’s “Old Town Road” was an unprecedented phenomenon this summer, staying atop the Billboard Hot 100 for a record-breaking 19 weeks. But here, it reaches only number five.

That’s because whereas Billboard folds original songs and their remixes into single entities, Spotify counts remixes separately. If the original “Old Town Road” and the Billy Ray Cyrus remix were tallied together, they would total over 1.3 billion streams and easily take the top slot. Instead, Camila Cabello and Shawn Mendes’ “Señorita,” with a billion streams, leads the way, followed by Eilish’s “bad guy,” Post Malone and Swae Lee’s “Sunflower” and Ariana Grande’s “7 Rings.”

These Spotify leaderboards reflect how much pop has shifted towards hip-hop by adopting its postures, cadences, and sonic textures. Eilish, Post Malone and Grande all rely heavily on hip-hop elements, while the two other most-streamed artists of the year—the Brit Ed Sheeran and the Puerto Rican Bad Bunny—have also effectively incorporated rap into their global brands of pop music.

The “Wrapped” campaign also reflects another major development in the streaming world: the onset of podcasting. In February, Spotify bought Gimlet Media, a podcasting giant, and positioned itself as a new leader in a rapidly expanding space. While their incorporation of podcasts into music playlists earlier this year drew some blowback, the gamble appears to be paying off. There are more than 500,000 podcasts on Spotify, and their podcast audience has grown by more than 50% since the start of the year.

The most popular podcast on Spotify this year was the Joe Budden Podcast with Rory and Mal, in which the rapper Budden discusses hip-hop music and culture; he also engaged in high-profile dust-ups on-air, including with Nicki Minaj. The podcast represents a confluence of two major cultural forces—hip-hop and podcasting—and perhaps shows the direction Spotify will head in the decade to come. 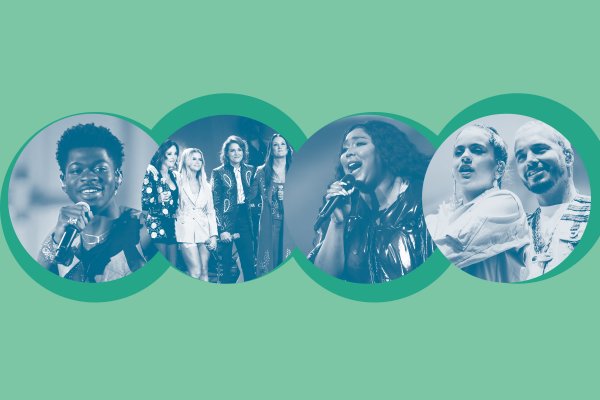