A fire that spread through the fourteenth floor of a high-rise apartment in Minneapolis, Minn., early Wednesday morning has left five people dead and four others, including a firefighter, injured.

Firefighters responded to the blaze at about 4 a.m., and said, in a statement issued on Wednesday morning, that they took about 30 minutes to extinguish the fire, which broke out in a building located at 630 Cedar Ave South.

It was a “very tragic night at the beginning of the holiday weekend,” said John Fruetel, chief for Minneapolis Fire in a press conference streamed on local news channel KSTP, an ABC affiliate.

Fruetel said units on the fourteenth floor were “very heavily damaged” are “probably going to be uninhabitable.” He said it appeared the fire had been “burning for a while” before firefighters arrived. Fruetel added that there had been a lot of evacuations as firefighters worked to contain flames in the high-rise building.

City councilman Abdi Warsame, who toured the complex after the fire, said at least three of the victims were East African, according to the Star Tribune. He called the incident “frightening and saddening,” adding that “most of the people here are seniors or people with disabilities.”

“I think the first responders did a good job, they got everybody down and it could have been a lot worse,” Warsame said. “I got a tour of the fourteenth floor and it’s just gutted.”

Jeff Horwich, director of policy and external affairs at the Minneapolis Public Housing Authority, told TIME that “the limited number of people whose units were affected by the fire” would have a place to stay. They would be accommodated within the city’s public housing system, Horwich said.

Casper Hill, spokesman for the city, told TIME that the fourteenth floor of the building “will not be habitable for some time.” He noted that “remedial cleanup” would be needed on other floors but residents should be able to stay on those floors.

Hill said that apartments that full under the Minneapolis Public Housing Authority’s domain are primarily inspected by the U.S. Department of Housing and Urban Development, not city authorities. However, he noted that the city has done some “complaint-based inspections” inside the building, including one in 2014 related to maintaining fire protection systems.

Hill told the Star Tribune that the apartment complex is not mandated to have a sprinkler system by code but does have smoke alarms.

The Minneapolis Fire department tweeted while personnel were on the scene that heavy smoke had reached the sixteenth and seventeenth floor and that one resident on the twenty-first floor was “refusing to evacuate.”

Four of the five deceased civilians were “found on the fourteenth floor and were pronounced dead on the scene,” Minneapolis Fire said in its statement. Another victim died in an area hospital, where he was transferred after he was found in a stairway. The victims’ identities have not yet been confirmed.

Three civilians were also taken to the hospital “for various medical concerns, in addition to a firefighter who suffered a “minor injury.”

Minneapolis Fire said the agency continues to investigate the cause of the fire. 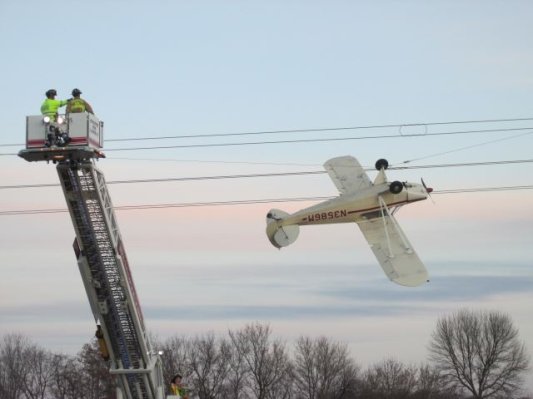 Plane Gets Caught Upside Down in Power Lines
Next Up: Editor's Pick