How Rising Temperatures Due to Climate Change are Shortening Pregnancies

It’s bad enough that adults have made a climatological mess of the world. It’s worse that the mess is having a disproportionate impact on kids—who did nothing to create the problem, but are more susceptible to health issues caused by rising temperatures than adults are. Now, it appears, global warming is doing its damage even further down the human age spectrum. According to a new study published in Nature Climate Change, rising temperatures may have a direct impact on human gestational time, increasing the risk of early delivery.

Babies are considered premature when they are born at 37 weeks or earlier. But delivery between 37 and 40 weeks is still not considered ideal, with late-term births correlated to lower birthweight and even potential cognitive development problems later in life. Many variables can cause an otherwise healthy pregnancy to come to term earlier than it should—one is extreme heat.

To study this effect, Alan Barreca, an associate professor at UCLA’s Institute of Environmental Sustainability, and economist Jessamyn Schaller of Claremont McKenna College, analyzed daily temperature and county-by-county birth rates across the U.S. in a two-decade window from 1969 to 1988. That is an admittedly old dataset, but the researchers had little choice.

“In 1989, the vital statistics system started to be more cautious about information it allowed out publicly in order to make it hard to identify individuals precisely by place or date of birth,” says Barreca. “They even began masking some counties. So 1969 to 1988 gave us the most thorough information.”

The exact biological mechanism by which heat impacts pregnancy isn’t clear, but there are multiple theories. It’s possible heat leads to cardiovascular stress in the mother that in turn causes the body to go into labor early. Another possibility is that high temperatures may trigger an increase in levels of the hormone oxytocin, which plays a role in both labor and, later, lactation.

“There may even be a third cause,” Barreca says, “which is loss of sleep. Minimum temperature on a hot day occurs at night, but it can still be hot enough to disrupt sleep, and that might be an important avenue to early birth.”

The effect of heat on pregnancy was less pronounced in hot-weather regions like the desert southwest and the deep south, probably because expectant mothers who live in these parts of the country have acclimated to high temperatures. Income makes a difference as well: greater wealth means a greater likelihood of air conditioning in the home, mitigating the pregnancy-shortening effect of temperature. And since, in the U.S., income often breaks down along racial lines, the study found that African-American mothers are somewhat more likely to experience temperature-related early births than white mothers.

Not every early birth is the same, of course, and the women in the study delivered at different points within the 37 to 40-week window. On average, however, Barreca and Schaller calculated that an early birth caused by 90º F or greater temperature cost a woman and her baby 6.1 days of gestation.

Across the entire 20-year period sampled in the study, there were 25,000 early births caused by high temperatures annually. That’s a small share of the 3.5 million babies born per year on average during that time window—but it’s still 25,000 babies every year who didn’t get the growth and developmental benefit of a full 40 weeks.

Troublingly, the problem is only likely to get worse. The 1969 to 1988 period was merely the leading edge of the heat spikes the world has experienced in recent decades. As climate change grows more severe—with eight of the ten hottest years on record occurring just in the last decade—more and more babies are likely to be emerging too early into a too-hot world. 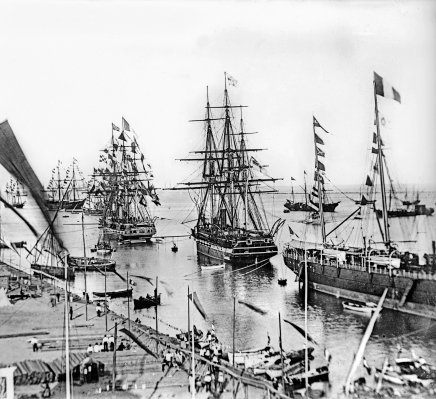 When the Suez Canal Opened 150 Years Ago, It Helped Connect the World—And Heralded the Climate Crisis
Next Up: Editor's Pick