Anne Boleyn Has Had a Bad Reputation for Nearly 500 Years. Here's How One Historian Wants to Change That

As the second wife of King Henry VIII, Anne Boleyn was one of the most powerful women in the world in the 16th century. In fact, Henry’s desire to annul his first marriage to Katherine of Aragon so he could pursue Anne is widely credited as a key factor leading to England’s astounding break with the Roman Catholic Church in 1533. Even so, her peers at the Tudor court didn’t hold back when it came to their ideas about her. Contemporary descriptions of Boleyn painted her as a seductress, as power-hungry, and even as a witch with six fingers who enchanted the king.

And those descriptions stuck.

For hundreds of years, Anne Boleyn’s bad reputation has run throughout both conventional historical narratives and popular depictions of this time period. And there’s been no shortage of them: The story of the woman who had been Henry’s queen for only three years before he ordered her beheading in 1536, on charges of treason, has retained public interest — look no further than the film The Other Boleyn Girl, in which Natalie Portman portrays Boleyn as a scheming temptress, or the television series Wolf Hall, featuring Claire Foy’s Anne as part of an ambitious and social-climbing family.

But for historian Hayley Nolan, those portrayals of Boleyn raised several unanswered questions.

“I wanted to get to the truth of why and how Henry could do that to Anne,” says Nolan. “Then in researching him, I discovered that everything we’ve been told about Anne is not the truth.”

Many popular histories paint Boleyn as setting her sights on Henry in pursuit of power, and the king making the ultimate sacrifice for love in choosing to break with Rome in order to wed her. Much has been made of the love letters Henry VIII wrote to her. Although undated, the surviving letters of their correspondence (only Henry’s remain; Boleyn’s have not survived) are thought to span almost three years.

As Nolan’s account makes clear, however, the king had been making inquiries in secret about divorcing Katherine of Aragon years before Boleyn came on the scene, and Boleyn actually resisted the king’s advances. She ran away from the royal court for a year starting in the summer of 1526 to escape, and those love letters appear to encompass the time when she was absent from court, distancing herself from his advances. “The historians who do acknowledge this say it was a calculated tactic and sexual blackmail — the ultimate example of ‘when a girl says no, she really means yes,’” says the historian. “There are historians who are calling Henry’s harassment love letters and claim that he sentenced the queen he loved to death. I’m sorry, but the manner in which a man kills a woman does not prove his love for her. If it can end in decapitation, it was never love.”

Nolan sees parallels with how some stories about women are told today. Earlier this fall, a New Zealand jury found a 27-year-old man guilty of the murder of British backpacker Grace Millane. His defense rested on the claim that Millane had died accidentally during consensual sex; several media headlines about the case were criticized for disproportionately focusing on Millane’s sexual history.

“Even if people try and say [the Tudor period] was a different time, no it wasn’t,” says Nolan. “It’s always trying to discredit the victim when actually we need to be defending the victim — that’s why we can’t dismiss the romanticization of Anne’s story. It filters down and has an effect.”

No part of Boleyn’s story makes that clearer than the end.

Boleyn was arrested along with five men she was accused of committing adultery with — one of whom was her own brother George — in May of 1536. She was tried first and found guilty of adultery, incest and high treason, including the charge that she planned to kill the King so she could elope with a lover. But by this time, Henry was already deeply besotted with his own mistress Jane Seymour; he would be betrothed to her the day after Boleyn’s execution.

Nolan suspects there was more to the story than adultery, a contentious issue about which historians have disagreed for decades. Many historians suspect that the charges against Boleyn were at least exaggerated and at worst wholly fabricated by Thomas Cromwell, an adviser to Henry who was engaged in a power struggle with the Queen; Nolan argues that the Queen’s lack of privacy and her deeply held religious beliefs would have made it difficult to be unfaithful at all, much less with multiple men.

Two months before her execution, Boleyn was involved in passing nationwide legislation titled the Poor Law, which stated that local officials should find work for the unemployed. The law entailed creating a new governing council that rivaled the one headed up by Cromwell. “Suddenly we have a much more devastating reason as to why Cromwell would be immensely threatened by the Queen,” says Nolan. “She wasn’t a ruthless bully or seductress; she was actually a working politician who died for pushing this radical anti-poverty law through parliament.” While the law’s creation has long been attributed to Cromwell, Boleyn’s involvement was recognized as part of U.K. Parliament Week this November.

The traditional historical interpretation of Anne Boleyn has relied on sources that obscured that part of her story. For example, Nolan says, the Spanish Ambassador Eustace Chapuys is a source of much contemporary writing about her, but he was a supporter of Katherine of Aragon. And even beyond the ambassador, the people who kept the records in the 1500s and the people who interpreted them in the centuries that followed tended to be overwhelmingly male. To Nolan, they brought the perspective that women only achieve power by “trickery.”

And, she argues, correcting Boleyn’s story has broader implications for the way women’s stories are told. “We send out a dangerous message to the world when we tell readers and viewers that women only want power for selfish and frivolous reasons,” she says. “When we tell readers that Anne was killed because she had a string of torrid affairs, it implies that women deserve their downfall.”

In Women and Power: A Manifesto, classicist Mary Beard traces the roots of misogyny all the way back to the Ancient Greeks, finding the image of the poisonous Medusa transposed onto contemporary female leaders, including Angela Merkel and Hillary Clinton. In the U.K., this year several female politicians have announced they will not run in the upcoming December general election, citing increasing abuse in the form of death and rape threats. It was this climate that left Nolan determined to make Boleyn’s story heard.

“Her story is more relevant now than ever before, because she was a politician who was taken down,” says Nolan. “This is still happening, and this is why we need to learn what really happened in order to make sure that history never repeats itself ever again.” 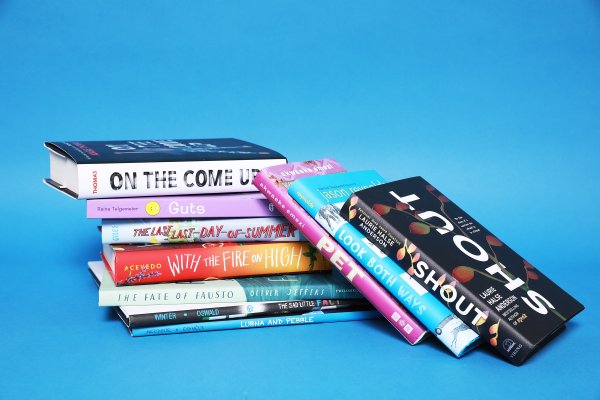