Sophia Huang Xueqin, a freelance journalist who was a key figure in the #MeToo movement in China, holds a sign at her home on Dec. 8, 2017.
Thomas Yau—South China Morning Post/Getty Images
By TIME Staff

Sophia Huang Xueqin is not afraid to speak out on issues considered taboo in China.

The young activist and journalist became a key figure in China’s fledgling #MeToo movement after she went public with her experience of workplace harassment in 2017. Her example encouraged others to speak out. A 2018 survey she conducted found that more than 83% of female journalists in China had experienced sexual harassment on the job.

After protests broke out in Hong Kong in June against a proposed law that would have allowed China to try suspected criminals under the mainland’s opaque legal system, Huang posted two essays online about her experience participating in rallies.

The movement has since snowballed into a wider campaign against Beijing’s control over the city, and Chinese authorities have censored information about the protests in China. Travelers crossing the border between Hong Kong and China report being searched for evidence of their participation in demonstrations.

In October, Huang was detained in the southern Chinese city Guangzhou and charged with “picking quarrels and provoking trouble.” The offense — which is punishable by several years of jail time — is commonly used by Beijing to silence journalists, activists and lawyers.

This month, Huang is on One Free Press Coalition’s list which highlights the 10 “most urgent” cases of threats to press freedom across the world.

Read about all 10 journalists under attack on the December list here:

China is the second-leading country for imprisoned journalists, according to CPJ. One among them is Sophia Huang Xueqin, a journalist who has covered the extended and ongoing unrest in Hong Kong this year and has been detained in Guangzhou since October on charges of “picking quarrels and provoking trouble.” The vague crime could mean five years in prison for the former Xinquaibao and Southern Metropolis Weekly investigative reporter.

At least six corporate heads, including that of JPMorgan Chase and Google Cloud, decried Saudi Arabia this year, and Amazon’s CEO appeared at a memorial service marking one year since the death of Jamal Khashoggi inside the Kingdom’s Istanbul consulate. All of this comes as the White House has skirted the subject and repeated pressure to launch an independent criminal investigation into the Saudi crown prince’s alleged involvement in the brazen killing of the Washington Post columnist.

After Luis Carlos Díaz was detained for more than 24 hours in March, Venezuelan prosecutors needed to present evidence supporting charges of “public instigation” by November 12 or the case against Díaz could be closed. The decision is still pending, leaving the dual Spanish citizen and Unión Radio News reporter prohibited from leaving the country or speaking publicly about his detention and expected to report to intelligence agents every week. In addition to arrest, officials raided his apartment, confiscating or stealing money, computers, phones and personal items.

The past year has brought continued attacks against Pskov-based stringer Svetlana Prokopyeva, a freelance contributor for Radio Free Europe/Radio Liberty who reported a story about a young man who detonated a bomb inside a government building. Prokopyeva was accused of “publicly inciting terrorism,” was placed on a list of “terrorists and extremists” and endured a raid of her home, seizure of possessions and her passport and freezing of bank accounts. She is facing up to seven years in jail on terrorism-related charges. Reporters covering her case are now being harassed too.

The family of Qazi Shibli has expressed concerns that The Kashmiriyat news website editor has grown weak since his July detainment. As Kashmir autonomy lessened and Shibli reported on increased troop deployments into the region, he has been held on charges including “waging war against the Union of India,” “creating fear and panic among common people” and being “deeply involved in disrupting the peaceful atmosphere.” He is now imprisoned out of state more than 600 miles away, and the family has hired a lawyer to help file a petition for bail.

An editor and reporter for Moroccan online news outlet Badil, Hamid al-Mahdaoui has served half of a three-year sentence for “failure to denounce a crime threatening national security” while traveling to cover anti-corruption protests in 2017. His lawyer calls the charge baseless, stemming from an unsolicited call received from someone claiming to be smuggling weapons. The sentence was upheld this year, and al-Mahdaoui has gone on hunger strike and been denied medicine, nutritious food and access to a doctor.

Since February, Algerian authorities have expelled or suspended journalists covering protests. Sofiane Merakchi, a freelance correspondent for Beirut-based TV channel Al Mayadeen and other foreign news agencies, was arrested in September at his personal office in Algiers, and his November 15 hearing for charges of “evading customs and tax” was postponed.

At least seven journalists have been arrested in Egypt since anti-government protests began in September, including Esraa Abdel Fattah, a reporter and social media coordinator focused on human rights violations for banned website Tahrir News. She was charged with spreading false news, membership in a banned group and abuse of social media networks (all which she denies) and jailed pending investigation. Two pro-government outlets accused her of lying about officials beating, hanging and choking her.

More than two years ago, freelance journalist Azory Gwanda went missing in Tanzania after investigating rural mysterious killings. The government has failed to conduct an investigation or disclose any knowledge of his whereabouts. In July, Foreign Minister Palamagamba Kabudi said in an interview that Gwanda had “disappeared and died” but backtracked amid requests for clarification. 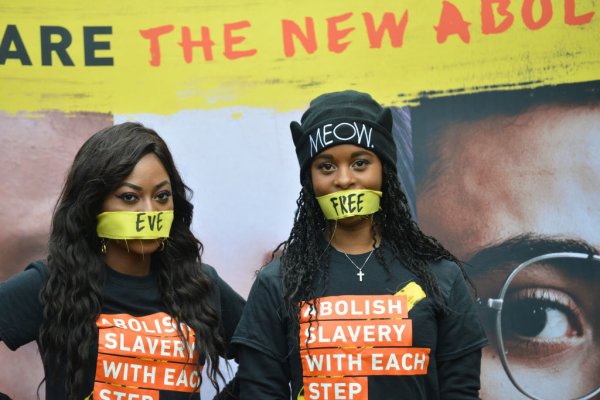 Slavery Still Exists All Around the World. Here's How Some Countries Are Trying to Change That
Next Up: Editor's Pick