The best of this year’s young adult, middle grade and children’s books help young readers understand the world around them. They move from stories of friendship and community to more mature topics like sexual assault and the experiences of refugees. Jonah Winter’s The Sad Little Fact sheds light on the importance of truth at a time when it is often obscured. In Raina Telgemeier’s Guts, a fourth-grader grapples with illness and anxiety. And in Elizabeth Acevedo’s With the Fire on High, a teen mother searches for a way to follow her dreams while supporting her family.

Here, TIME and TIME for Kids select the best children’s and young adult books published this year, listed in order of publisher recommended age, from youngest to oldest.

The Sad Little Fact is the dystopian allegory most needed by kids growing up in the era of “fake news”—an Animal Farm for five-year-olds. The latest picture book by veteran children’s author Jonah Winter follows a little blue “fact” that must rebel against oppression when it is pursued by “the Authorities” and banished underground. The book features quirky geometric illustrations by Pete Oswald, who juxtaposes bright, colorful “facts” against an authoritative regime painted in stark shades of grey and red. Ultimately, Winter offers an encouraging conclusion: even if buried, facts will always rise to the top.

The Fate of Fausto: A Painted Fable, Oliver Jeffers

Author and artist Oliver Jeffers’ striking fable tells the story of a greedy man and his desire to dominate everything in the universe, including nature itself. The bestselling author, who illustrated The Day the Crayons Quit and The Day the Crayons Came Home, drew inspiration from the German legend of Faust, who sells his soul in exchange for knowledge and power. Jeffers, who couples sparse prose with cheeky and minimalistic prints to drive home his moral warning, orchestrates a resounding interplay of images and words: some of his pages feature just images, some just words and others a simple hint of story leaking off the page and into the abyss. The result is a contemplative reading experience for readers of all ages.

Buy now: The Fate of Fausto

After seeing the devastating image of a three-year-old Syrian refugee who drowned in the Mediterranean Sea, Wendy Meddour, author of A Hen in the Wardrobe, set out to write a story that would help children understand the plight of refugees. Poignant and timely, Lubna and Pebble addresses the experiences of refugees with subtle language: Lubna lands in a “world of tents” and tells her best friend, a pebble, everything about “home” and “the war.” At its core, Meddour’s story is about the universal themes of friendship and dealing with the unknown. The illustrations feature an overlay of crayon and pencil scribblings that bring a sense of intimacy, making the narrative feel as though it’s coming straight from Lubna to the reader.

When Raina Telgemeier wakes up with an upset stomach, she assumes it’s just the flu. But long after returning to school, the fourth-grader is plagued by nausea, gas and a phobia of vomit. Her chronic tummy troubles are only intensified by typical grade-school angst—friendship triangles, bullying, miscommunications—and eventually it all escalates into a full-blown anxiety attack. The third in a trilogy of memoirs from Telgemeier, beloved for her graphic novels looking back on girlhood, Guts is a sensitive portrait of childhood anxiety. For every kid who will giggle at the gross-out moments in Guts, another will relate to Telgemeier’s story.

This supernatural detective story takes place on the last day of summer vacation. It stars a pair of cousins in small-town Virginia who wish they could avoid the start of school by making the day last forever. But when they encounter a mysterious character bearing an unwanted gift, they get more than they bargained for. Soon, time is shrinking, expanding and standing still—and it’s up to the boys to make things right. The Last Last-Day-of-Summer is an upbeat story about black boyhood from Lamar Giles, co-founder of the nonprofit We Need Diverse Books, which advocates for diversity in children’s publishing.

Each of the ten overlapping stories in Look Both Ways captures a day’s walk home from school in an unnamed city. With every new set of characters—a pack of kids whose parents are all cancer survivors, an expert skateboarder, two friends discussing boogers as a metaphor for life itself—Jason Reynolds shines light on another sliver of the neighborhood. As always, the kids’-lit heavyweight packs every page with humor and heart, treating his young characters and readers with profound respect. A finalist for the National Book Award, Look Both Ways offers essential lessons in empathy.

A 2019 National Book Award finalist, the debut young adult novel from Freshwater author Akwaeke Emezi transcends the bounds of any single genre. Emezi’s story of a 15-year-old black trans girl named Jam—who learns there are monsters in her supposedly safe world—oscillates quietly between fantasy, suspense, horror and science fiction. Jam’s plight to uncover these monsters gives way to a fascinating dissection of the fight between good and evil, leading the teen to question the sanity of a society in which no one wants to acknowledge what’s happening.

With the Fire on High, Elizabeth Acevedo

Though Emoni Santiago has the talent and drive to become a chef, she fears her ambitions are incompatible with her reality: she’s a teen mom raising a toddler and living with her abuela, who needs Emoni’s help to pay the bills. Elizabeth Acevedo, who won a 2018 National Book Award for her YA debut The Poet X, propels Emoni along a journey of self-discovery as the high school senior strives to find a way to balance her career aspirations with providing for her family. Acevedo, a slam-poet, wrote her first novel in verse, and With the Fire on High carries an energetic, fluid beat. Acevedo once again proves her skill at crafting dynamic stories about teenage girls, the burdens they carry and the dreams they chase.

Buy now: With the Fire on High

On the Come Up, Angie Thomas

The second novel from the star author of The Hate U Give focuses on 16-year-old Bri, a black teen growing up in the same fictional neighborhood of Garden Heights where Starr Carter lived. Bri has a burning desire to become a rapper like her father, who was shot and killed in a gang incident. But she has a hard time in school and her family is struggling to make ends meet, layering on the pressure she’s already feeling. In lyrical prose, Thomas writes of Bri’s hardships, which are only amplified when one of her songs goes viral—and draws the wrong kind of attention. Thomas crafts a gripping reflection on legacy, race and freedom as Bri discovers the strength of her voice.

Buy now: On the Come Up

Two decades after the publication of Speak, Laurie Halse Anderson’s trailblazing young adult novel about sexual assault, the award-winning author bravely tells a new story: her own. Written in verse, Shout documents Anderson’s harrowing account of being raped by an older friend at 13 years old. She traces the trauma and how it has impacted both her writing and her worldview. Most powerfully, Anderson offers a stirring portrait of the survivors, especially students, she has met throughout her career. Her voice is enraged, but encouraging—resulting in a necessary read not only for teenagers, but also for the adults who have a hand in bringing them up. 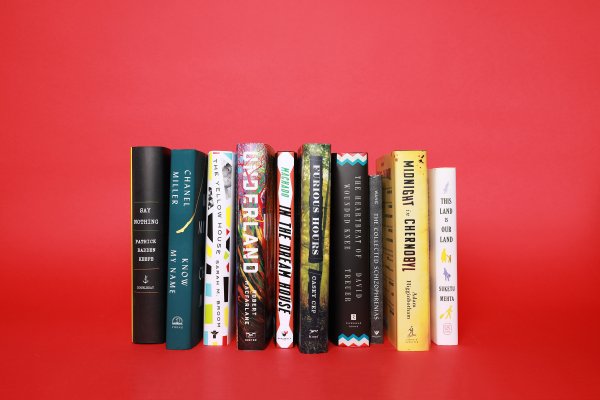