Transport for London announced Monday that Uber's operating license would be suspended in the British capital, pending an appeal
Olly Curtis/Future Publishing—Future via Getty Images
By Rachael Bunyan and Billy Perrigo

The ride-hailing app Uber has lost its license to operate in London, after officials identified a “pattern of failures” including more than 14,000 trips taken with bogus drivers.

Transport for London (TfL), the British capital’s transportation authority, made the decision not to renew Uber’s license after an investigation into passenger safety.

It comes after TfL refused to grant Uber a full operating license in September, saying it had to address passenger safety issues.

On Monday, TfL said Uber had made some improvements but failed elsewhere, including by allowing unlicensed drivers to upload their profile pictures to authorized drivers’ accounts, resulting in passengers taking roughly 14,000 trips with a driver other than the account holder.

“Despite addressing some of these issues, TfL does not have confidence that similar issues will not reoccur in the future, which has led it to conclude that the company is not fit and proper at this time,” TfL said in a statement.

Uber cars will still be available for hire while the firm appeals the decision. But if Uber does get banned, here are some alternatives if you need to hire a car in London:

The Estonian ride-hailing firm launched in London this year.

The company boasts that it’s “safe and reliable,” takes less of a commission from drivers than its rivals, and that all its rides are carbon-neutral.

The French ride-hailing firm, acquired by German auto-makers Daimler and BMW, launched in London this year.

The company says it covers the “congestion charge” drivers pay to operate in central London, saving riders at least £2 ($2.57) for each trip. Kapten also rewards loyal customers with “points,” which can be redeemed for free rides.

The on-demand ride-sharing firm launched in London in April 2018 after start-up Via and Mercedes-Benz Vans joined forces.

Customers can share their rides with others heading in the same direction in a bid to save money and reduce carbon emissions. ViaVan also offers a private ride option when available.

The firm doesn’t have a base rate available on its site — the fares depend on how far customers travel, when they ride, and the number of plus-ones in their party— but customers can view how much the ride will cost before they book.

The Israeli-owned Gett app launched in London in 2011 as a tech-savvy alternative to hailing one of London’s traditional black cabs, which cannot be ordered in advance.

The app has no minimum fares; riders pay the fare shown on the taxi’s meter, either by card or cash to the driver.

Gett says the average wait for one of their cabs is three minutes, and boasts that its drivers are the “highest rated” in the capital.

Get the app here.

Addison Lee launched as a private minicab company in 1975, and now offers users a ride-hailing experience similar to newer startups with its own app.

The company boasts it has “the largest fleet in London” and free Wi-Fi and phone charging in all its cars.

The firm doesn’t have a base rate available on its site, but tells you the exact cost of a journey before you book.

Paper tickets are expensive, so get cheaper rides by buying an Oyster card at a machine, or by using your contactless debit or credit card at the barriers. Rides in the central “zone 1” of the city start from £2.40 ($3.10) and increase slightly the further afield you go.

Find the cost of traveling between two stations here. 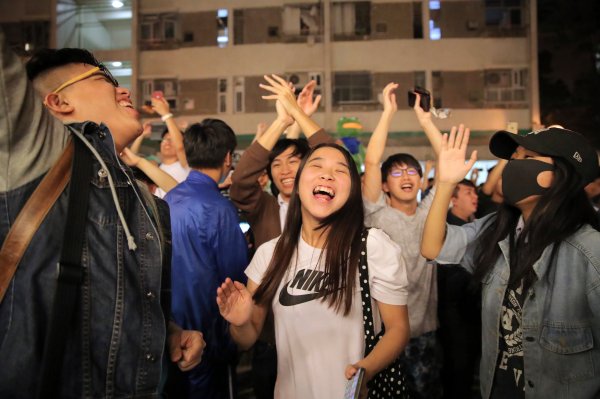 Hong Kong Elections: What the Pro-Democracy Victory Means
Next Up: Editor's Pick