How Climate Change Exacerbates Gender Inequality Across the Globe

Among the lesser studied effects of climate change are the social and economic impacts on women.

Nitya Rao, professor of gender and development at University of East Anglia has been studying gender and development for decades; with the recent attention on the profound impact that global temperature changes are having on local and national economies, she decided to analyze the impact of climate change on women specifically. She and her team studied data collected from 25 case studies in 11 hot spot countries in Asia and Africa to document how climate change is influencing women’s status—measured by their ability to make strategic decisions about their livelihoods, take agency over their financial situations, and work to improve their social and economic positions, among other things.

“What we found is that climate change and environmental stress are common factors that intensify pre-existing disadvantages or gender and developmental inequalities,” she says. That’s especially true in poorer parts of the world, where families depend on agriculture and labor jobs to make money, and where male migration, male-dominated labor markets, and patriarchal institutions already put stresses on families, mostly women, that are struggling to survive. Climate change exacerbates those burdens, Rao found.

For example, as warming global temperatures lead to more crop uncertainty—droughts or floods could wipe out a year’s work in a matter of weeks — breadwinners, often male, are more likely to have to move away from the family for months at a time to earn an income. Women are left to care for the children and earn whatever they can, because often the men aren’t able to send their wages home on a regular basis. Even if they can, says Rao, the hard labor in industries which are unfamiliar to them, such as construction or mining, often compromises their health, and many families have to spend an increasing amount on medical costs. “Even if they are bringing money, not all of that is going to the household necessarily,” says Rao.

Labor markets around the world also typically discriminate against women, forcing them to find low-paying jobs, or dangerous, often illegal ones like selling drugs or prostitution. As the climate becomes more unpredictable with changing temperatures, pressures on women in agriculture-based economies deepens.

State regulations governing banking and land ownership also work against them. Only 15% of land around the world is owned by women, for example, and climate hot spots are no different. Since male family members hold the title for land ownership, banks often deny women seeking loans that would use their land or future crops as collateral. When they can’t seek loans from legitimate institutions, these women are forced to turn to private lenders who charge higher interest rates and can be corrupt, further putting women at financial risk.

“These disadvantages already exist for women, but with the unpredictable climate, women sometimes have to make pre-emptive decisions about whether their crop will survive, or if their livestock will survive the season, and sometimes they are forced to make risky decisions,” says Rao. “So, the uncertainty that comes with climate change is particularly hard on women.”

In many poorer countries, services like childcare, potable water, and affordable food programs are privatized and expensive, putting them out of reach of the families that need them most. Making such services more widely available could significantly alleviate the climate-related burdens on women.

In their analysis, Rao and her team did find some programs starting to address these cultural and institutional burdens on women. In parts of northern India, for example, there are grass-roots efforts to get male family members who find jobs away from home to leave their bank cards to their wives, allowing them to access cash to hire workers when they need funds. “What I see happening on the ground, at the household level, makes me optimistic,” says Rao. “I was even surprised to find that norms in rigid paternalistic societies are turning quite supportive of empowering women more. But unfortunately, in order to implement most climate-based adaptations on a community level, you end up talking to the elite men who are the village leaders, and they ignore the pressures of climate and the need to support women.”

As more and more younger men and women voice their support for changing cultural and financial norms that disadvantage women, that could change though, Rao says. In the course of gathering data for the study, she notes, most of the people who participated were grateful for the opportunity to provide their perspective and to be heard. “They said nobody bothers to talk to them,” says Rao. “These are views that are missing in research and in producing real change.” 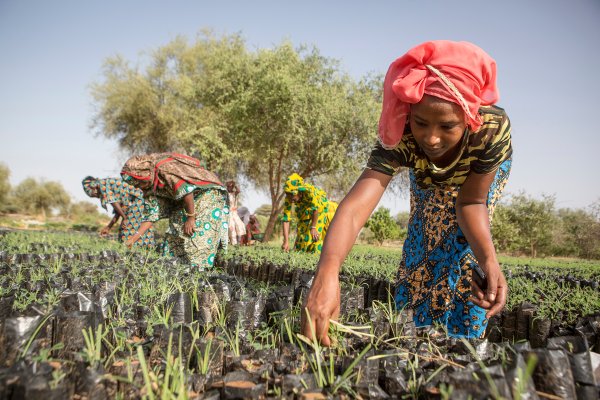 Former President Jimmy Carter: How Empowering Women and Girls Can Help Solve the Climate Crisis
Next Up: Editor's Pick